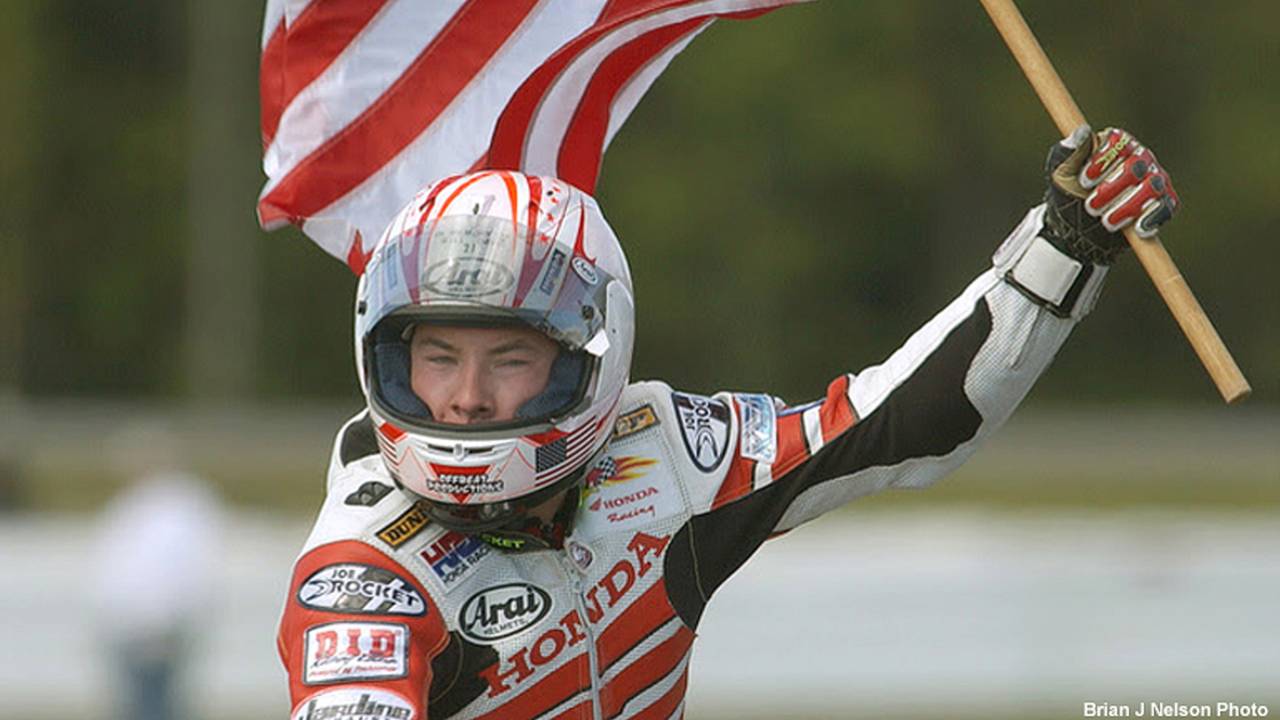 Tribute to Nicky Hayden that comes straight from the heart.

Earlier this week motorcycling lost a great person, His name is Nicky Hayden. Though his climb from good old boy dirt track racer to world champion is a monumental achievement, it is what he was off of the bike that will secure him a place in motorsport history as one of the most respected and adored racers of our time.

As an American motorcycle racing enthusiast in my twenties, The Kentucky Kid was really special to me. A lot of times you hear people warn you: “Don’t meet your heroes or it will often ruin it.” With this hero, that just wasn’t true.

His likable personality along with his championship pedigree, made him a role model and influence throughout my personal life. He was always close with his family, a characteristic that would never change regardless of his circumstances or success. His achievements would never have been possible without the sacrifice, devotion and support of the entire Hayden family, a fact Nicky always seemed to appreciate.

It’s easy to look good when everything is going well and you’re winning, but it’s not until the chips are down that people reveal their true colors.

In 2006 when Repsol Honda teammate, Dani Pedrosa took him out during the penultimate round of that fateful season, jeopardizing his chances of winning the world championship he’d spent decades working toward. Yet he still played it cool. Although he must have been livid, and would have been justified for losing his mind on the pint-sized Spaniard, he chose to take the high road, and avoided saying anything in anger in front of the press. Instead, he mused that, “He can help me at Valencia,” when asked how Dani could “make it right.”

Not getting wrapped up in the drama and politics in the racing world is no easy task. Nicky really did seem to operate under the belief that If you don’t have anything nice to say don’t say anything, especially when particular questions from the media can put you in compromising positions. A great example of this was when rumors were circulating that Sete Gibernau had gotten a new frame on his Honda MotoGP bike. Of course his rival denied it when asked about it. Shortly after Nicky was directly asked about the same question and he responded in a manner that encapsulates his positivity and ability to stay out of what many refer to as Paddock Politics.

After cracking his famous smile, Nicky replied, “Sete needs to go to church more,” and left it at that without directly answering the question while making the reality of the situation pretty clear. But that was pure Nicky, he was honest, understated, considerate, hardworking and universally likable.

This was just one of the many reasons that manufacturers loved him. He was always quick to thank his sponsors and team, he had a dedicated and positive attitude that seemed to rub off on those around him in the paddock. When Nick won, it was his collective team’s win, not just his, and when he didn’t do so well he shared the burden of the responsibility in the same way.

Even while having a more than frustrating experience riding for the Factory Ducati team, you never heard Nicky complain or blame the bike. It’s easy to see why he was such a popular choice as a brand-ambassador. So much of what Nicky stood for both on and off the bike, seemed to resonate with his fans. It was evident that he held himself to high-standards and conducted himself like a champion. He had the hunger and drive to win races but rarely seemed to make questionable moves, he was fair and always seemed to exhibit good sportsmanship. It’s a trait that seems to be less common in this era of self-promotion and the lack of graciousness that often comes with it.

By contrast, Nicky never seemed to use his fame as an excuse to be anything other than a professional. He was inducted into the MotoGP Hall of Fame in 2015 and the statement issued by Dorna, summed up what I’m trying to say here.

"For all of us, it's a great pleasure to give Nicky this award,” Carmelo Ezpeleta – CEO of Dorna Sports, “this is not just because you've been Champion and you're one of the riders with most starts in the premier class, but also for your behaviour over all those years, your sportsmanship and your friendship. It's a great pleasure to consider you one of our legends. Thank you for all you've done for the sport in all those years."

In addition to his sportsmanship, family devotion, stellar career and general positivity, Nicky had a certain charm and charisma that made him difficult not to like. His smile came up several times when I probed my peers for facts to help me write this article.

In his heyday, Nicky represented the sport by visiting late-night talk shows, morning shows and making a few Hollywood lists, including People’s 50 Most Eligible Bachelors back in 2005. That Kentucky charm was tough to ignore.

I hope he was aware of the positive impact he had on so many people as well as the joy he brought to countless race-fans while he was on the track. It pains me to say this, but thank you, one more time. So, here’s to Nicky, a motorcycle and racing enthusiast, a world champion, a gentleman, a class act, a son, a brother, a friend, a role model, a hard worker and a legend. While his legacy will live on forever, he will be greatly missed.

An influx of farewell statements have poured in from the motorcycle industry over the past few days. We have included some of them below:

Yoshishige Nomura - HRC President: “On behalf of all HRC employees and our racing teams, I wish to express my deepest condolences to Nicky Hayden’s family, his fiancée and his many friends. Nicky has been such a close friend and member of the HRC family that it’s very hard to believe he is gone. Together we won two AMA titles and the 2006 MotoGP crown, and until his accident he was giving 100 percent to bring success to the Red Bull Honda World Superbike Team. Nicky was a great rider and champion but he was an even better person. We always had the utmost respect for his racing spirit and for the commitment he showed on every occasion, while his charming character made him a favorite with the entire motorcycling world and race fans everywhere. At HRC we will never forget Nicky, who was very much one of us. Everyone at HRC is deeply saddened, but we will remember the many special memories we shared together with him. Our hearts and thoughts are with his family during this difficult moment.”

Ronald Ten Kate – Team Manager, Red Bull Honda World Superbike Team: “This is a huge shock to me, the whole team, the World Superbike paddock and actually the entire racing world. We only had the pleasure to work with Nicky for one-and-a-half years but we came to know him like all his previous teams spoke about him: fanatical about bikes, hard-working, charismatic but above all, he was pure and genuine. He was Nicky!

“He will be missed by all of us and I hope he will be an example for any young talent trying to reach the top as Nicky did himself. We wish the Hayden family and his fiancée Jackie all the strength they will need. Rest in peace Nicky Hayden.

Wayne Rainey - MotoAmerica President: “I’ve known Nicky and his family since they started taking road racing seriously, His natural dirt tracking talent made his transition to road racing seamless. Nicky worked hard, but his passion and desire to be the best was as strong as his work ethic. Being crowned MotoGP World Champion in 2006 was the reward for years of hard work. I believe Nicky loved the challenge and it’s what he was born to do. What really stands out for me was his character and the way he treated others with respect and kindness. I am very sad and Nicky will be missed by all of us.”