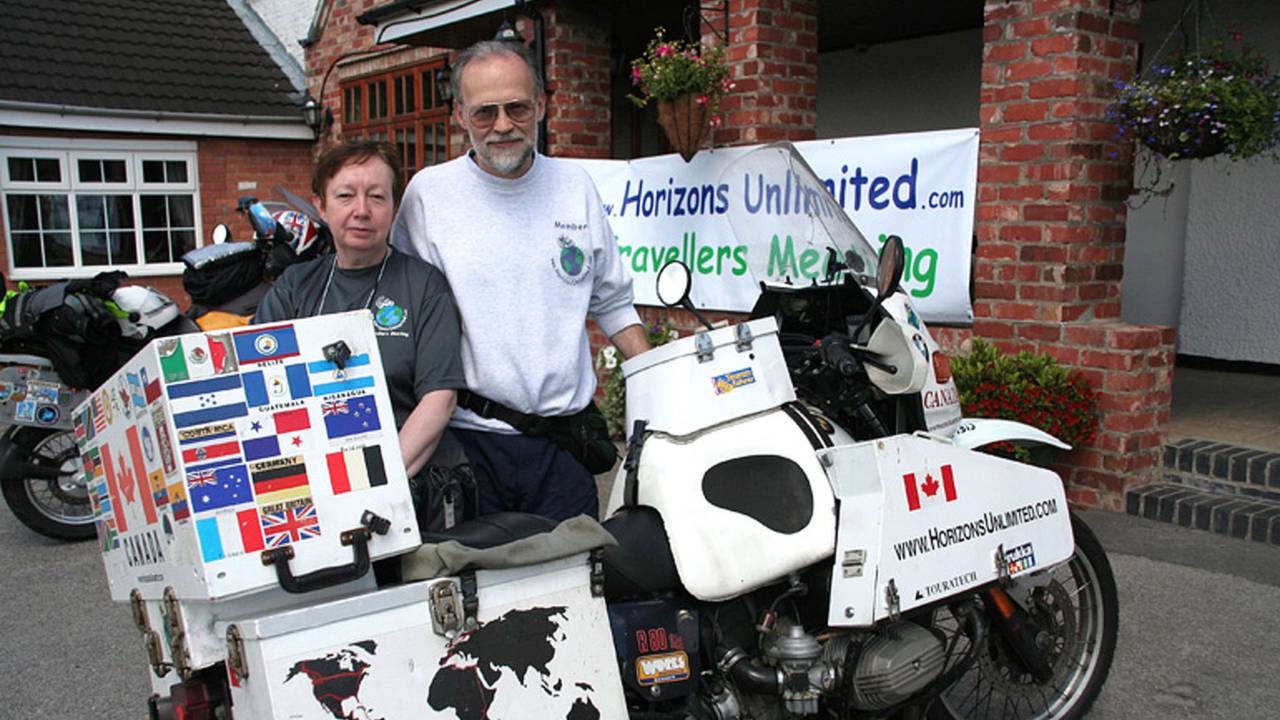 Everyone loves stickers, motorcyclists included. If you’ve ever taken a look at the panniers of a globe-trotting adventure bike, you may have seen one of a motorcycle carrying two people riding around the world. It’s the logo for Horizons Unlimited, an invaluable resource for both the seasoned and aspiring adventure motorcyclist.

Founders Grant and Susan Johnson describe both the online community and their travelers’s meetings as, “a global network. It’s your home away from home. It’s your family.” At a recent traveler’s meeting just outside of Yosemite in Mariposa, California, Susan went on to say, “Frankly, it’s your family that you would like to have, because your real family and friends are saying, ‘Are you crazy?’...These are the people that will encourage you to pursue this craziness, and help you when you’re traveling, and be happy to listen to your stories when you come back at the end of your trip.”

Grant and Susan Johnson with their globe-trotting Beemer

A quick perusal of the Horizons Unlimited website promises and delivers a plethora of tools and knowledge on the topic of around-the-world travel on two wheels. There are articles to inspire others to travel, as well as more pragmatic pieces covering an array of topics – appropriate paperwork for you and your bike, transporting your bike, budgeting, bike tech, crossing borders, destinations, staying healthy abroad, and more. There are also bulletin boards, referred to as “the HUBB” (Horizons Unlimited Bulletin Boards), where members can get direct feedback and link up with other travelers. There’s a section for travelers seeking travelers, to help link up potential companions on the road, as well as threads facilitating one-way trips. Say you only want to ride from Ushuaia to Alaska, and not back; there are subforms for bike swaps, rentals, and sales so that you don’t have to deal with shipping your motorcycle.

Though the website has gone through a recent overhaul to make information much more accessible, it’s still easy to become overwhelmed by the volume of data. Fortunately, Horizons Unlimited has produced video presentations on many of the topics, available on DVD and Vimeo, that provide a quick tour of the topics without any navigation needed. Their series, “The Achievable Dream,” covers most of the basics, drawing on the combined experience of some 150 odd seasoned adventure riders. These aren’t weekend warrior types, either. Some heavy-hitters include Ted Simon, author of “Jupiter’s Travels”, Lois Pryce, who rode solo from the UK to Cape Town, Elspeth Beard, the first British woman to circumnavigate the globe via motorcycle, Peter and Kay Forwood, who have visited every country on their 1994 Harley Davidson Electraglide, and Austin Vince of “Mondo Enduro,”  just to name a few.

A campsite at the Mariposa event

The Travelers’s Meetings provide yet another way to get inspired, informed, and swap stories with others from their global treks. We recently attended one such meeting in Mariposa, California. There, several volunteers presented information sessions and workshops covering such topics as a particular trip or destination, Mad Max-style roadside repairs, personal defense readiness, moto camp cooking, emergency response at an accident scene, and more. Grant Johnson did a workshop on tire-changing, where two experienced riders in the audience commented that they’ve been to Grant’s presentation three times, and still learn something new each time. Walt Fulton and Nancy Foote of Streetmasters were also there, providing off-road instruction and riding for an additional fee.

In addition to the Travelers Meetings, they also run Horizons Unlimited Mountain Madness events. Typically two-day events, not including day zero, these are competitions in orienteering and navigation on dual-sport and adventure motorcycles. There are no set courses, so teams must strategize and ride skillfully to win in this scavenger hunt on off-road motorcycles. Teams are comprised of two to four riders, with a minimum of two bikes. Competitors are divided by bike category (single or multi-cylinder) and challenge class, based on whether they elect to use a GPS or compass to navigate. The next event in the US is scheduled for April 13-15, 2018, at Granite Mountain in Arizona. The events are held globally, and are now sanctioned and endorsed by both the Fédération Internationale de Motocyclisme (FIM) and American Motorcycle Association (AMA). With the increased support, the competition has gotten fierce, but is still open to all, with objectives rating from easy to extreme in challenge.

Grant shows us how to change a tire

With all that they offer to the adventure motorcycle community, one might expect a huge corporation behind Horizons Unlimited, but that could not be further from the truth. The group was born in 1987 at Mulege, Mexico, during Grant and Susan’s first around the world trip. Susan and Grant figured that if Grant could sell enough pictures from the trip, they could write off all the expenses on their taxes. It evolved however, and ten years later it became Grant’s full-time job. Susan joined him full time twelve years later in 2009. The two have one very part-time assistant, but respond to most all of the emails personally. There’s no behind the scenes team, just volunteers local to their individual events. The Johnsons are the brain, heart, and core of the very grass-roots Horizons Unlimited. It’s an awful lot of work, and Susan joked that people couldn’t expect too much from them in terms of customer service, since it’s really just the two of them.

For Grant and Susan, traveling around the world on the motorcycle was just the start. Their around the world motorcycle trip was completed in stints, with Susan picking up various accounting jobs along the way to financially fuel it. Eleven years later, they’d achieved their goal and set their eyes on a new task.

“We are hoping to create an addiction to travel, which you’ll never be able to actually break," said Susan. "And Grant’s mother thinks that we are one step above drug peddlers. A small step at that... It was bad enough that we survived, and now we’re encouraging other people to do it! Shocking.”

Check out this NC700 trailer rig

She advises people to save Europe, Australia, and North America for when they’re older and need easier riding, instead urging them to chase the more challenging stuff while they still have the energy and resilience to enjoy it. She also urges motorcyclists and their traveling companions to be ambassadors for their country and be good guests. To that endeavor, Horizons Unlimited also sponsors Do Good As You Go, a nonprofit that connects travelers with volunteer opportunities along their journey.

READ MORE: 10 Things You Need to Take on a Motorcycle Trip

In spite of keeping themselves busy with Horizons Unlimited, Grant and Susan aren’t done traveling. They still tour about the globe, attending various Horizons Unlimited Travelers Meetings. They have, however, swapped their 1986 BMW R80G/S for a newer 1200 GSA, which they frequently ride two-up to Horizons Unlimited events around the world.