What it's like to tackle the Twistybutt: an exhausting and insanely twisty ride across Japan in less than 12 hours.

Japan.  Land of the Big Four motorbike manufacturers, the occasional earthquake, and one of the highest concentrations of fantastic mountain twisties in the known world. A lot has been written about the first two of those, but potentially not enough has been said about those touge.

Those what now? A touge (pron: toh geh) is the Japanese word for a mountain pass or ridge - the character for it looks like this 峠. Not all twisties are touge, but touge are very often excellent twisties, and Japan has a metric pile of them. As a celebration of this fact, for the past six years local biker Craig (Not the most Japanese of names –Ed) has put on the "Coast to Coast Twistybutt" challenge. The goal is to take on an almost endless string of twisties across the width of Japan in less than 12 hours. 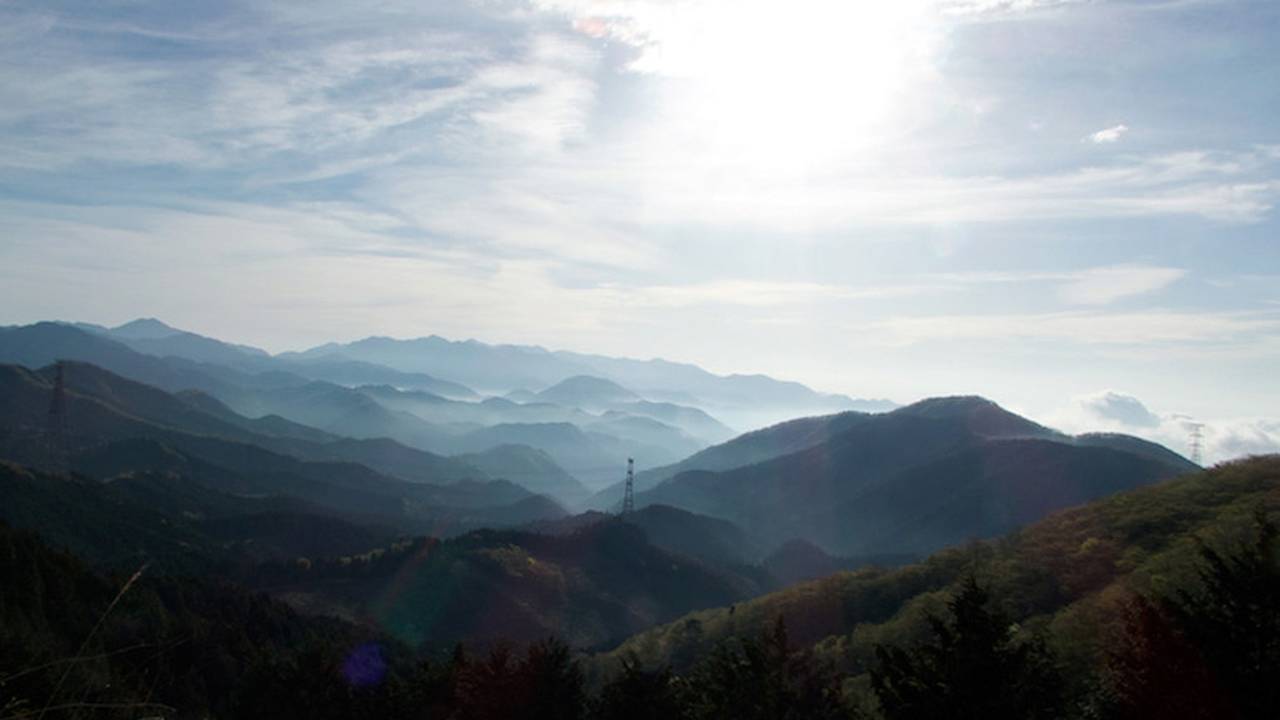 The route runs from the town of Odawara, on the Pacific east coast of the main island of Honshu, to the small town of Joetsu, situated on the shores of the Sea of Japan on the west coast – taking in 500 km (310 miles) of gorgeous winding roads.

I've known the organiser for several years but until I recently stepped up to riding a Yamaha FJ-09 (aka Tracer 900), I hadn't thought to take on the Twistybutt. I'd done touge. I'd done 500+km days. But I hadn't done both at the same time. 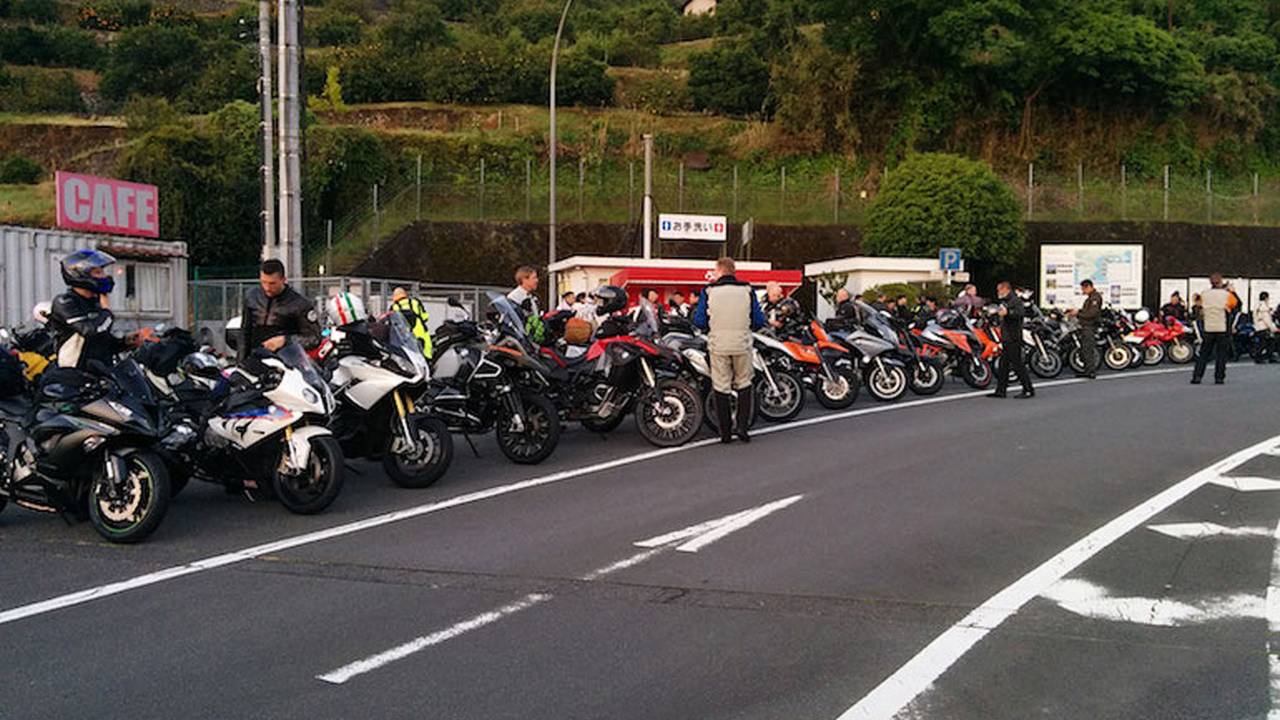 The starting point was less than an hour's ride away for me, meaning I was up at 3 am for a small breakfast and tea, then out to arrive for the 04:30 start. In total there were 57 of us: a varied selection of riders and machines from all over the world – from the expected BMW GSs, to 1980s classic Ducatis, more modern sports bikes, and a few sport-tourers like mine. Each of us had different ideas on the best method of navigation, from a list of road numbers taped to the handlebars, to mounted smartphones and high-end Garmins. After group photos and some exchanging of tips we rolled out in small numbers so as to not disturb the local people too much.

I took a relaxed pace in the first 50 km, happily carving through turns, the rising sun on my visor, the Yamaha's triple-cylindered heart growling, and both of us (the bike and me) enjoying the dry, relatively well-surfaced roads. Pacing was going to be an issue, as I'm not a fast rider, but unfortunately every corner delivered another stunning mountain vista. I burned a little too much time stopping, grabbing my camera, taking a picture, and gawping. 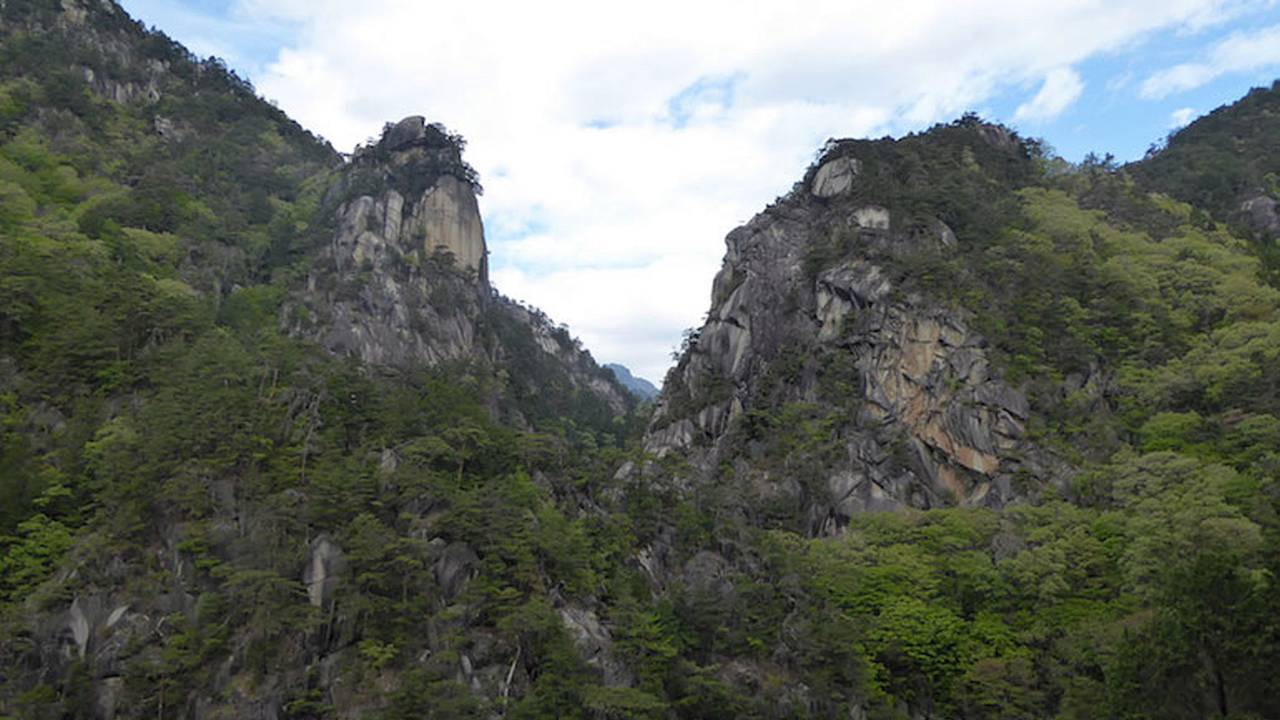 The next 100 km was still familiar territory for me: roads I'd done before, through farmland, small villages, and shady woods. At one point I was enjoying the ride so much I missed a turn. Eventually I got to roads I didn't know and had to rely on my smartphone to help me navigate. And sometimes the phone wasn't much help. At one point I burned 15 minutes wandering a maze of small-town streets trying to find a way around a closed bridge. Nice little town, though.

Every once in a while I'd spot some fellow Twistybutt riders, which was reassuring. At least then you can be sure you're on the right route. After roughly 200 km, deep into the spine of Japan's mountains, I met a fellow Twistybutter – a relaxed, amiable American rider called Bob on his 2003 BMW GS thumper – who was trying to make sense of his navigation app. The thing had been re-routing him all over. 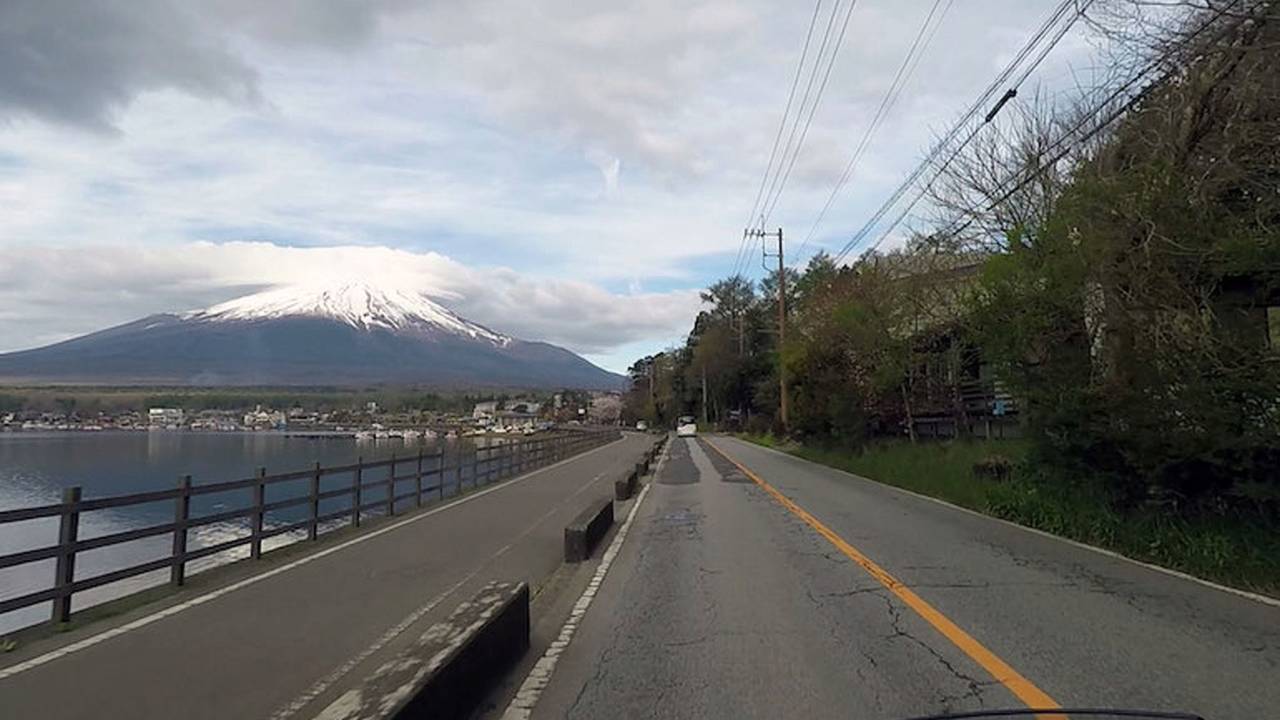 We fell into tackling the challenge together, which meant the benefit of taking turns leading, navigating, and such. At one point we had been stuck for about 10 km behind a Toyota Vitz (called a Yaris most places), with the young driver going at an excruciatingly slow pace. Usually I'm fine with people driving or riding within their comfort zone, but this chap refused to pull over in the passing areas, despite a queue of several cars - and us -  behind him. Eventually Bob and I decided we might as well just pull over and take a break. Water, chewing gum, a few stretches, and away again.

By the way, I recommend Black Black chewing gum from Lotte, which has a decent kick to it.

There's lots to be said for these touge in terms of riding practice: getting up and down the gears quickly, and tight bends on steep inclines. The start and finish of Twistybutt are at sea level but the route took us over Japan's highest national road (meaning it is reliably maintained). This pass – which we wouldn't reach for a while – created the only true time constraint for the trip: officials were scheduled to gate the road closed at roughly 5pm. 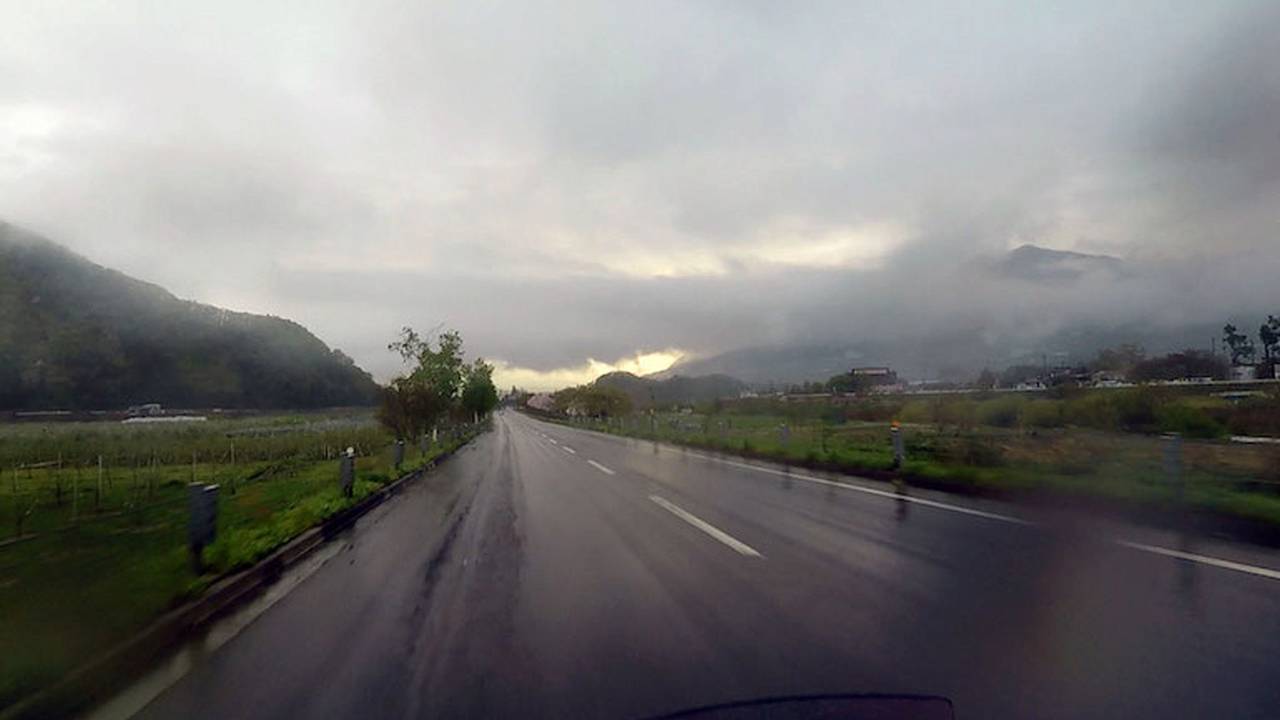 At about the 300 km point we were stopped at a red light when I noticed a late-80s Ducati in the car park of a 7-Eleven – clearly the same one I'd seen that morning and spoken to the owner of: a Japanese chap called Taka-san. Bob and I pulled over to see if he was OK and he showed us his problem: his rear sprocket was done - no teeth left. He was waiting for a truck to pick him up and take him home. There wasn't much we could do, so after we'd checked he had enough cash and phone battery, we bid farewell and moved on.

Road conditions, as they would be the whole day, were variable – from nice new asphalt to cracked old concrete, asphalt with huge tar snake populations and pot holes, and, at one point, no road at all. Which meant carefully riding down a slope of packed gravel, sand, mud and water. Later I'd hear some fun tales of people whose traction control systems really did not like it. 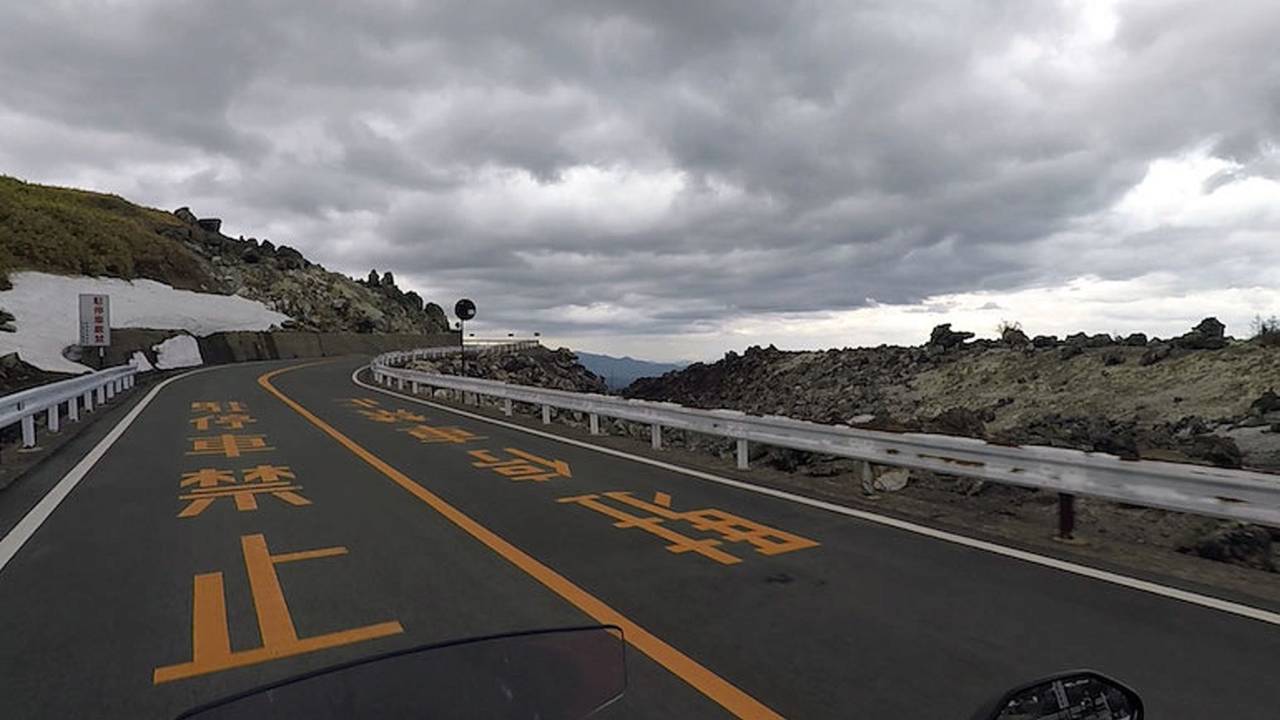 Finally making it to the highest national road in Japan after about 370 km was a great feeling: navigating streams of water on the road, surrounded on both sides by walls of snow, the road carved into them, the rotten-egg smell of sulfur from volcanic fissures, and roving clouds of fog. It was quite a fun way to take your mind off how cold and damp it was.

We passed through the go/no-go gate at around 4.40 pm and watched the safety vans and staff getting ready to close up and sweep. 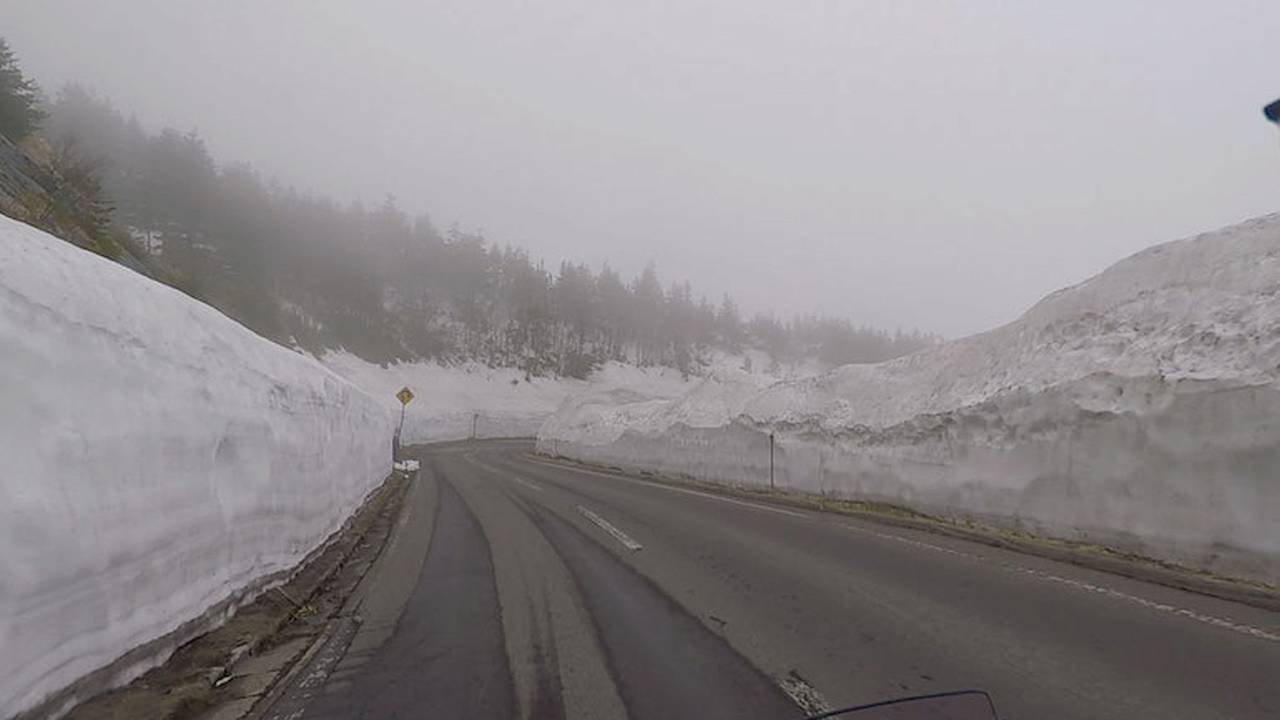 As we exited that set of twisties onto some straighter local roads to make our way to the next set, I realised we'd missed a small turn and pulled over to see how we could get back on track. By now, though, it was all but raining and starting to darken, especially with the low rain clouds beginning to make the mountains look like the entrance to Mordor.

Bob and I had the discussion about whether to take the acceptable opt-out and hit the direct roads to Joetsu or go back and push through the next twisties. Bob was conflicted as we'd noticed that one of his fork posts was leaking fluid. I was fixated with doing the route all the way. So, we cheerily parted ways and I headed back up, stopping to add some fuel.

In the countryside most of the petrol stations (gasoline stands as they're termed here) are mostly family-owned affairs, and as I crossed the country it was always easy to strike up conversations for a few minutes whilst filling up and having a drink. Good people. 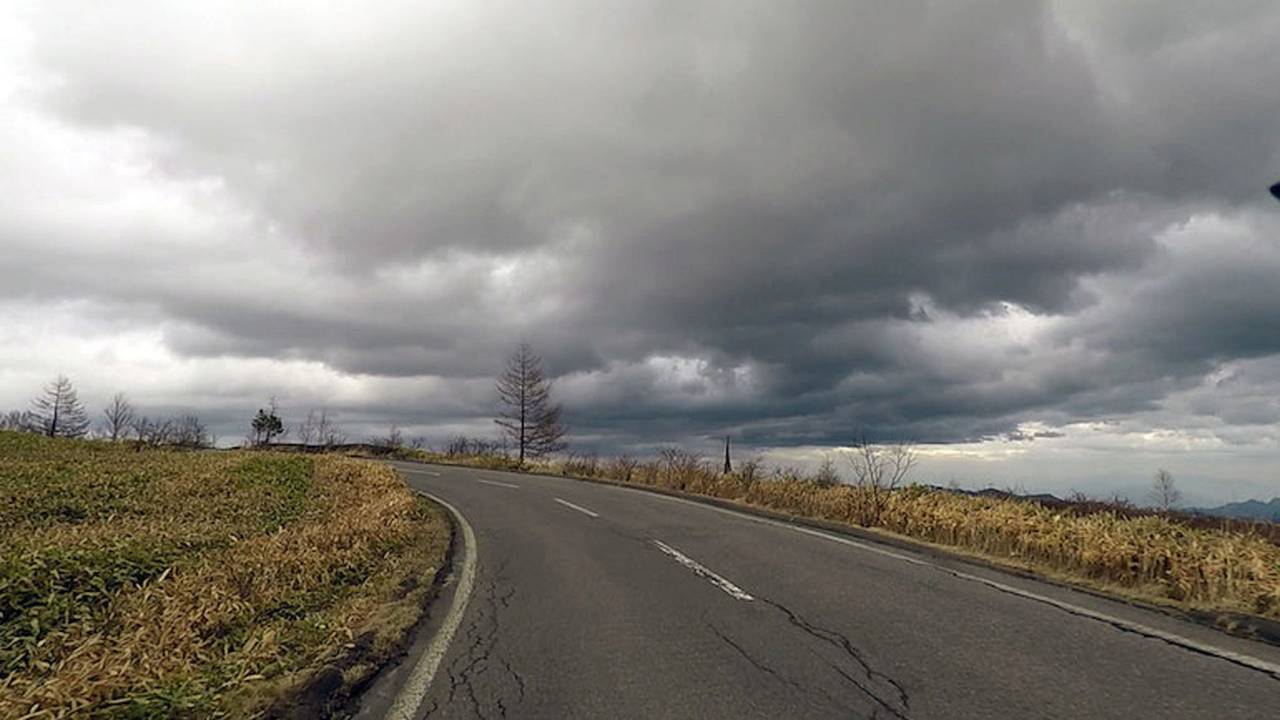 The next 70 km was difficult, a little scary at times, and some of the most rewarding riding I've done. I was now on farming roads. There were fewer road markings – often none – and no safety barriers between me and the trees, open drains, or rice fields. There weren't many signs of life. No cars, no buildings – just darkness, rain, fog, and someone on a motorbike wondering if his obsessive compulsive need to follow the route exactly was going to be his undoing.

Well, it's not like I was truly alone. I had to dodge a lot of frogs and rabbits on the road. Some kind of bird, which might have been an owl, gave me a low pass, and I knew the area also has a fair deer population. Every now and then I'd see a light and think there was another human being, but no: just a random old post with a piece of reflective material barely still attached. Eventually I was heading downhill on a zig-zag of hairpins and able to see street lights far off and below me. 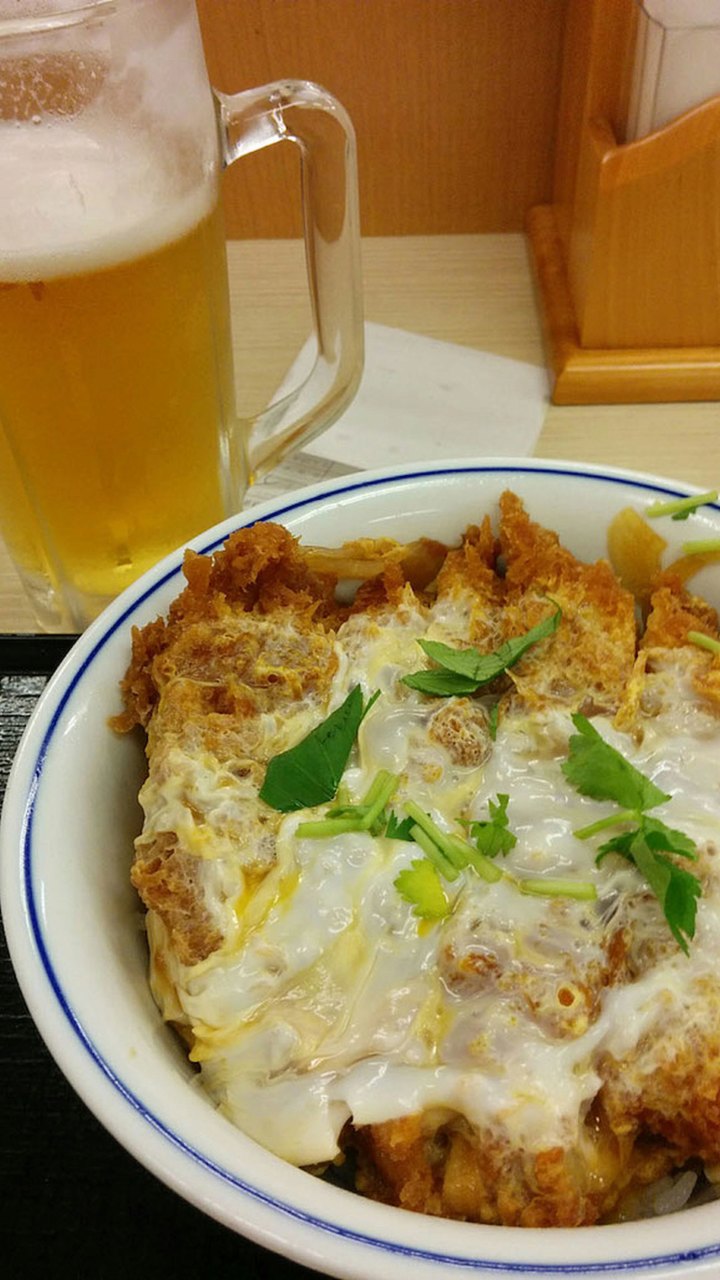 The touges were done and now it was now just a matter of making the run into Joetsu. As I merged onto the main road there was a flurry of horn beeps and arm waving from two chaps on GS bikes; somehow I'd managed to find other Twistybutters, who I followed into town. to their hotel where I took a quick break to call the family to say I was at least at the destination town. I found Bob there and it was good to know he'd arrived and his fork had held out. All that was left to do now was check in at my cheap hotel, and have a quick onsen (hot spring bath) before meeting up with the rest of the group who made it. I was likely one of the last in, but that's fine by me.

By: Guest Contributor
++
Got a tip for us? Email: tips@rideapart.com