We test ride the Yamaha FJ-09, the all-new sport tourer.

Motorcycling is a business. Dollars invested had better be dollars made. Money rules everything around us (dollar, dollar bills ya’ll). Sometimes that need to make a profit is a good thing. 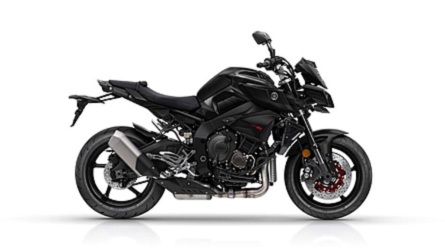 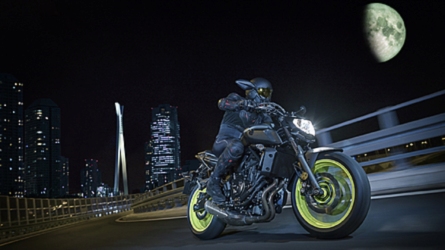 The Yamaha FZ-09 is one of Team Blue's best selling platforms yet (especially if you add the sales numbers of the FZ-07). So, thinking like Hollywood, Yamaha decided if they make a sequel to their best bike, it had to work.

Take that data and add it with the tremendous increase in sales of the Sport Touring market since earlier this decade, and Yamaha produced a bike they expect to make them big money.

The FZ-09 is one of the best values on the market right now, but it has been saddled with an engine that many feel overpowers the bike. Like a bucking bronco, the FZ’s suspension can't keep up particularly when coupled with a jerky throttle response. Yamaha created a fun, but hard to ride bike. Now Yamaha has produced just simply a fun all-around bike with little in the way of sacrifice. 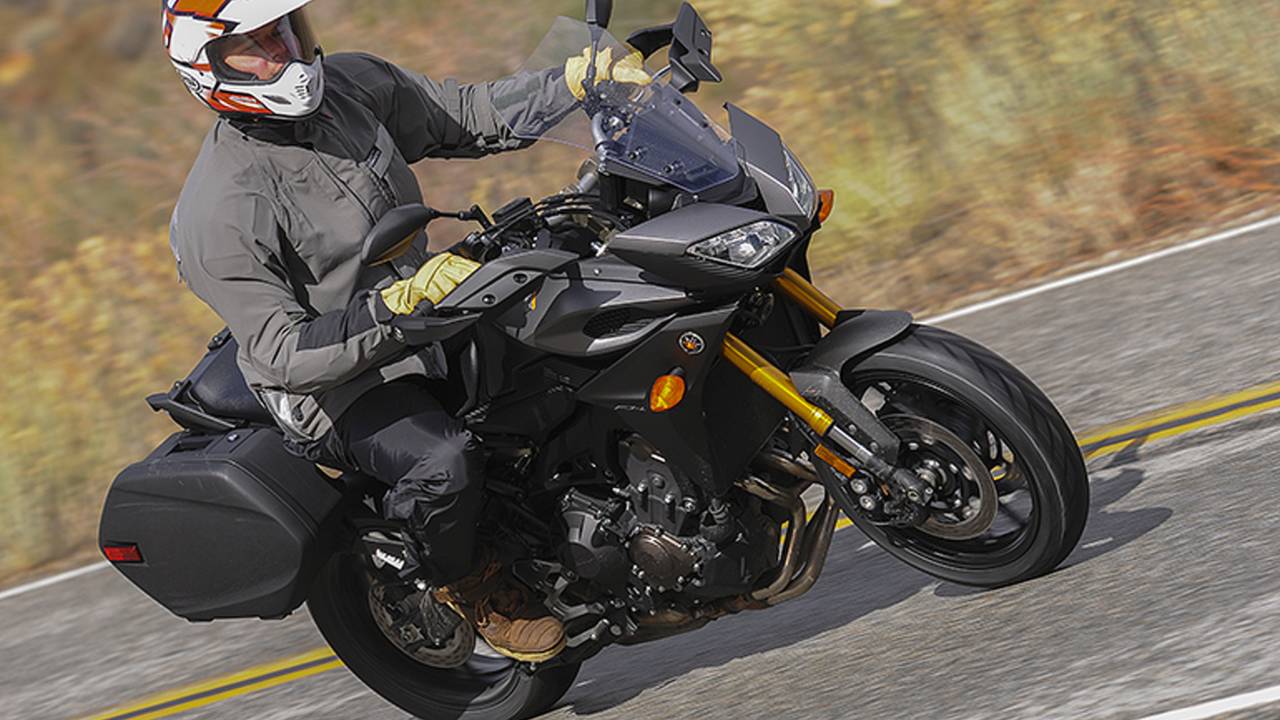 It’s less about what’s new and more about what’s different from the FZ-09, a lot. It rides and feels like a totally different motorcycle. The FJ-09 is happily not just an FZ-09 with a bunch of added accessories and options.

Can you take this bike to the track and strip it down to an FZ-09? No. The power plant, tire package, suspension and ergonomics are track worthy, but the FJ-09 has more comfortable attributes. 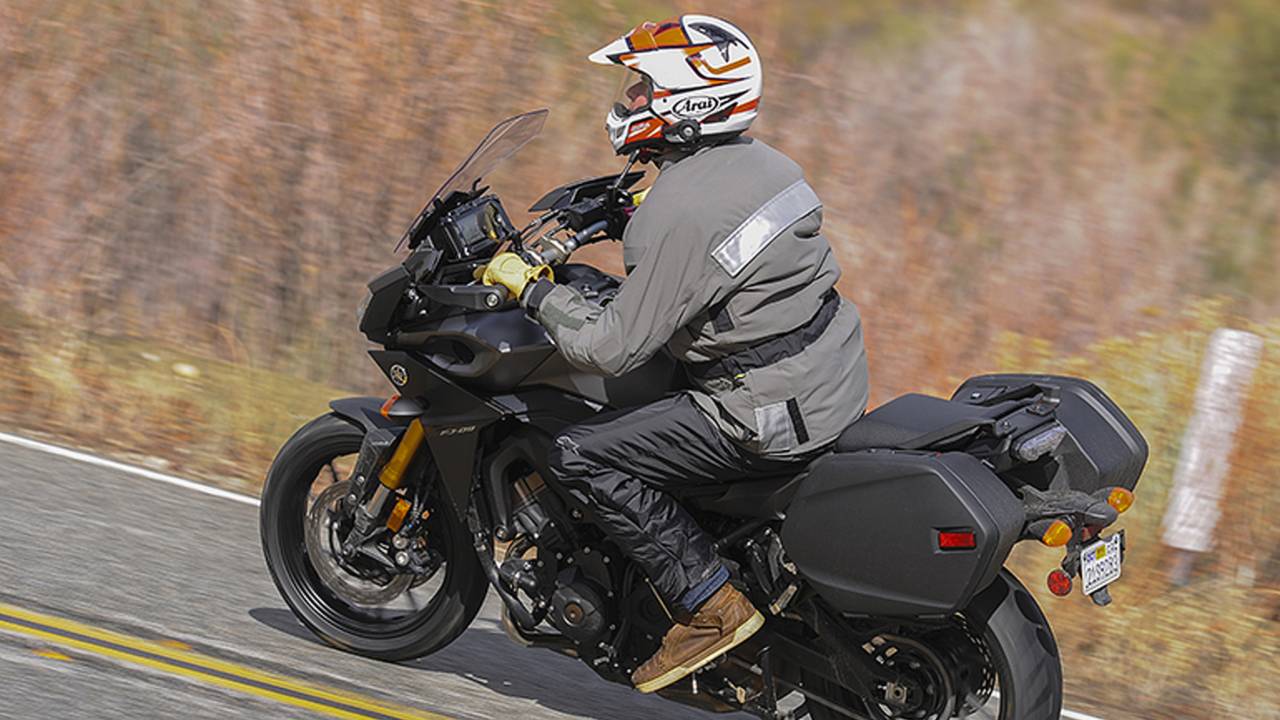 All of the unique parts share the same “less-aggressive” characteristic. The handlebars are the most obvious (the FZ-09 does have handlebars, not clip-ons)  - they're much taller and wider than those on the FZ-09.

From the outside you'll see a totally unique fairing and headlight assembly, adjustable windscreen and a LCD display. A 1.1 gallon larger gas tank, longer and wider subframe and hand guards round out the obvious changes to the FJ-09.

The suspension has vastly improved from the notoriously terrible suspension on the FZ-09, with progressive action and a much softer, more responsive feel. 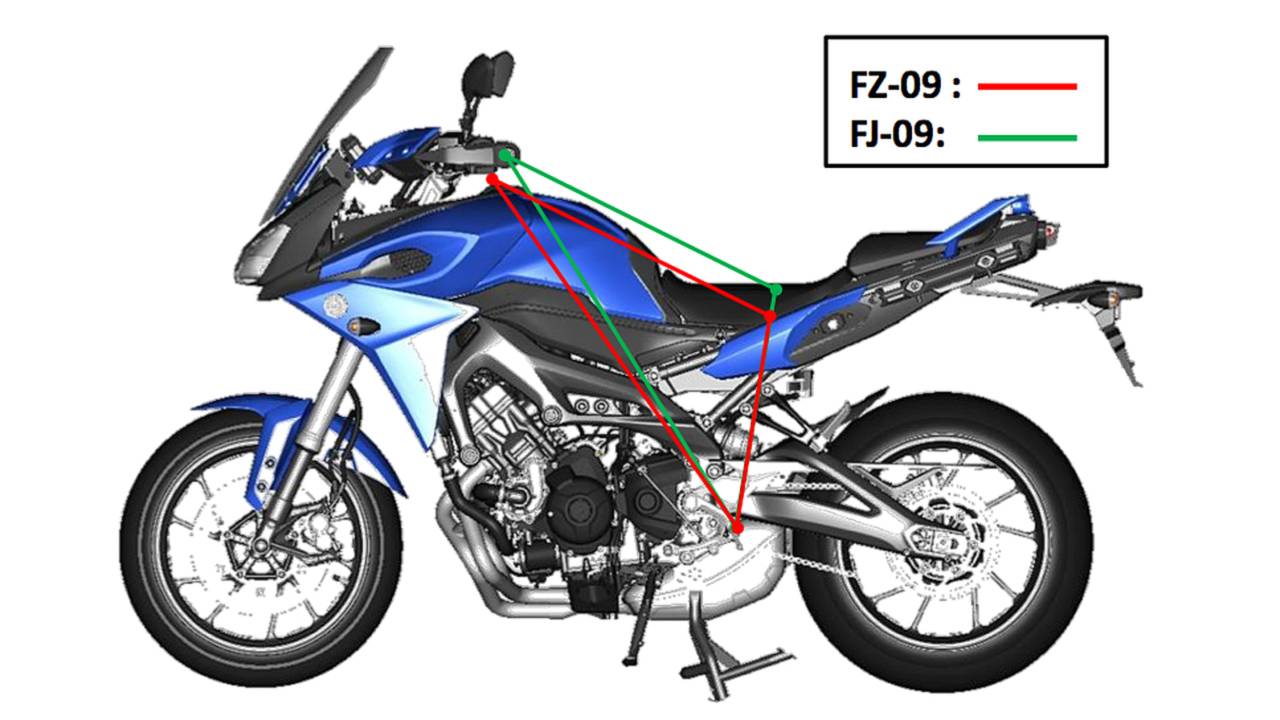 This is the real selling point for Yamaha  - the FJ-09's improved ride feel. You’re up off the bars, with your feet under you, tank up and on your chest, butt down into the bike and bars up and in front.

The seat has three settings of on-the-fly adjustment you can do with no tools, and the windscreen can be adjusted without any tools as well. Even though I never adjusted the windscreen, at max height it worked great. 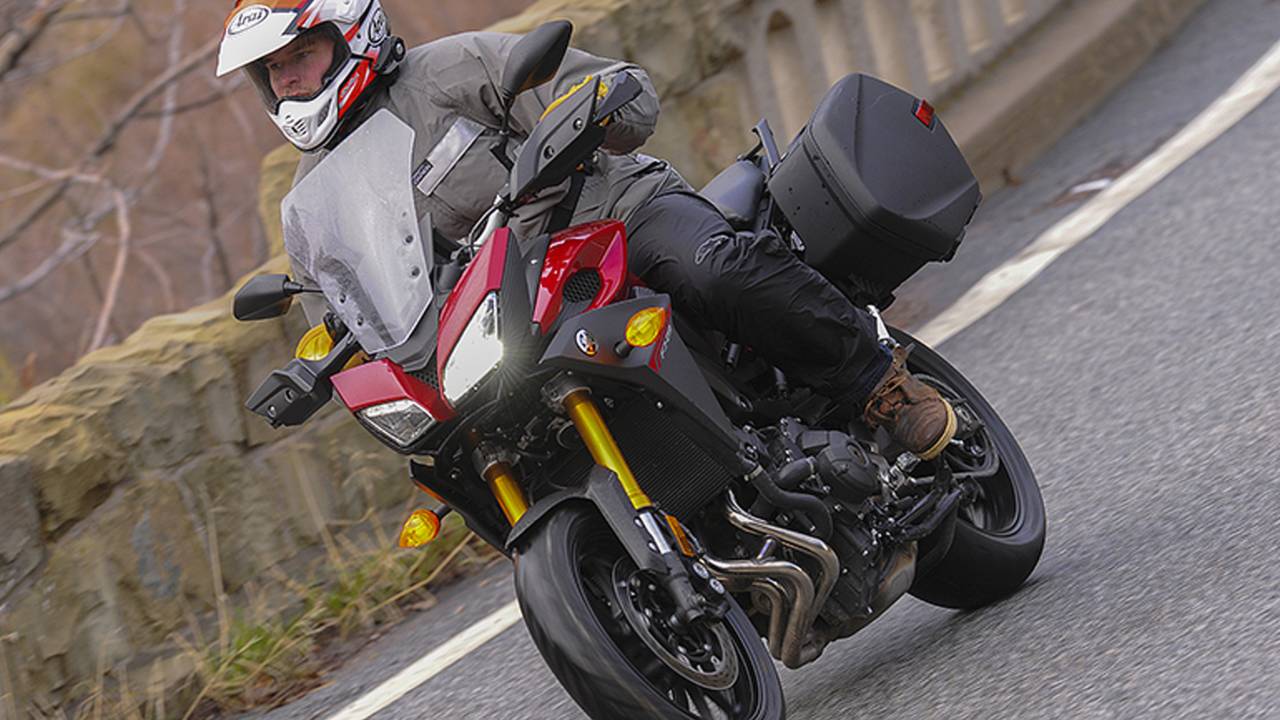 I sat in the FJ-09 as opposed to the upright, aggressive position that points a rider up on top of the bars. The bigger tank gave me something to sit behind and helped me grip the bike harder for a more comfortable ride. It’s more difficult to be up on the pegs, sliding your butt off the seat and drag a knee, but it can still be done.

The longer subframe, which translated to a much more comfortable ride for me, increases the overall length of the bike, while the wheelbase remains the same.

While the ergonomics are great, luckily it’s not the only thing you’re dishing out the extra $2,500 for. 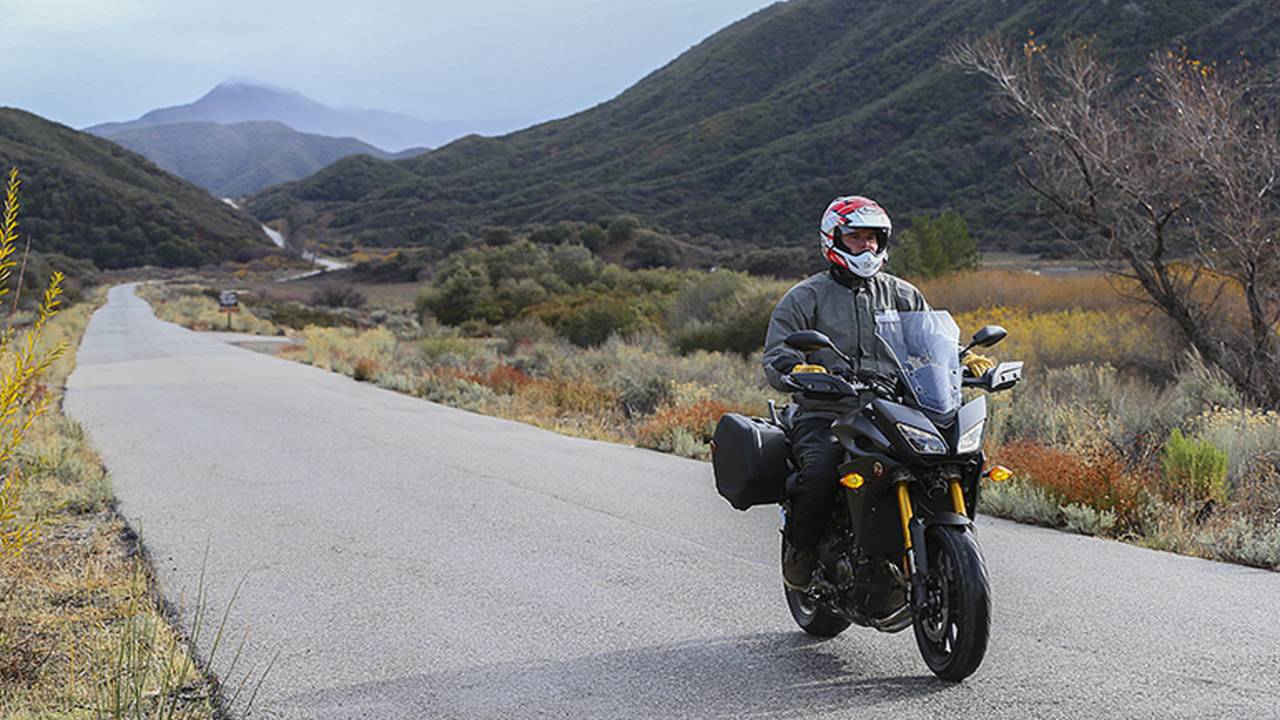 Our Yamaha media launch started at the Ojai Valley Inn and Spa, a high class resort with a friendly staff and beautiful scenery. We rarely needed to leave other than to ride.

The entire week was covered with heavy rain, forcing the first wave to change route. We headed out early in the morning for a series of rainy photo stops up Hwy 33, a two-lane road that weaves though a tight valley, tunnels through mountain walls and criss crosses over the stream. Once we started heading up into elevation, the weather cleared up and we laid the hammer down.

One of my favorite things about riding with the Yamaha crew is the fact that our leader (same as on many of the Yamaha intros) is a former flat track and motorcross racer. He’s a smart and fast rider, watching the road that was constantly changing from flooded areas, gravel and even snow and ice.

There were four of us in the front group and we broke off from the rest. It was fun and the perfect bike for riding in a group. We’d round a corner fast with braking and suspension potential left over in case we met with anything sketchy mid-corner. 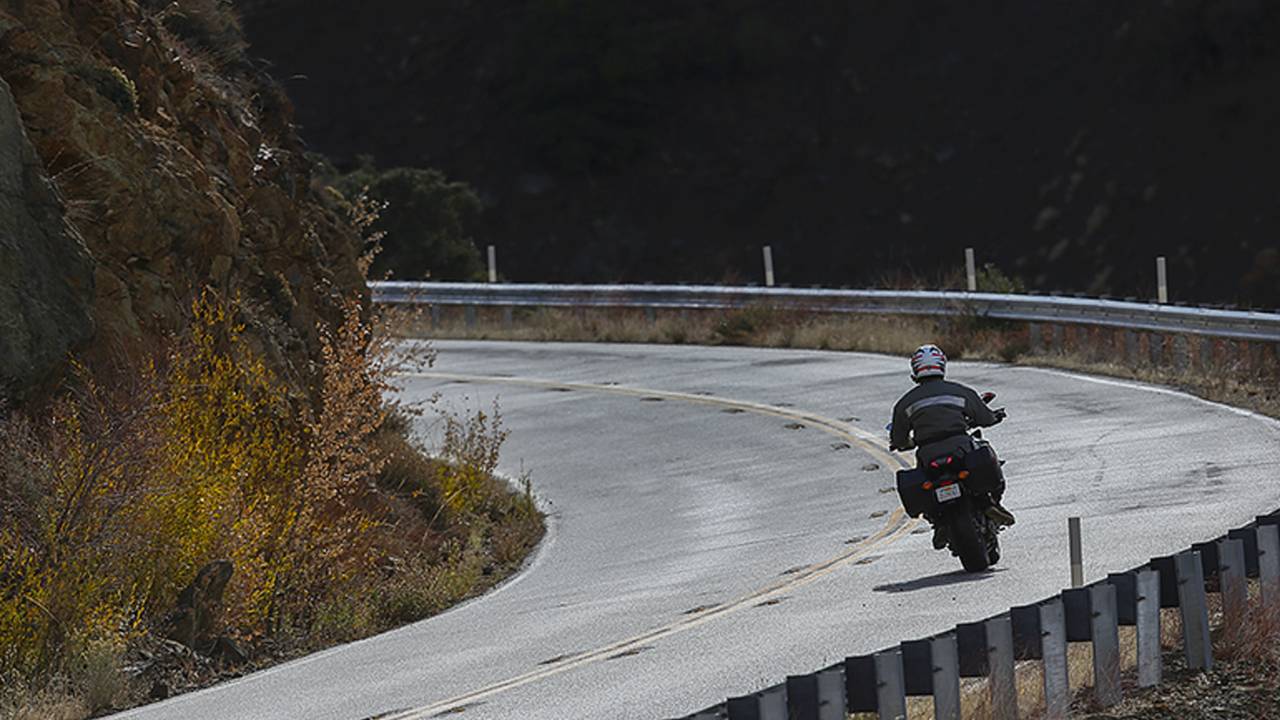 How to Ride It/Technology

Luckily there are only about three things you need to know before taking off. The bike now has stability control which will keep the rear tire in line and the front on the ground. It's always on; simply hold the TCS button on the dash for several seconds, once the TSC light comes on, then it’s off.

The riding modes include: A, Standard and B. Simply shift through them via the right-hand toggle button. B can be viewed as Rain mode, and it's the setting we rode in for the first part of the day. It’s smooth with some limit on the throttle. Standard is self explanatory and A mode is what we called "FZ-09 mode." It’s aggressive and choppy with the throttle, but according to everyone that rode that day, it’s a lot smoother than the throttle response on the FZ. 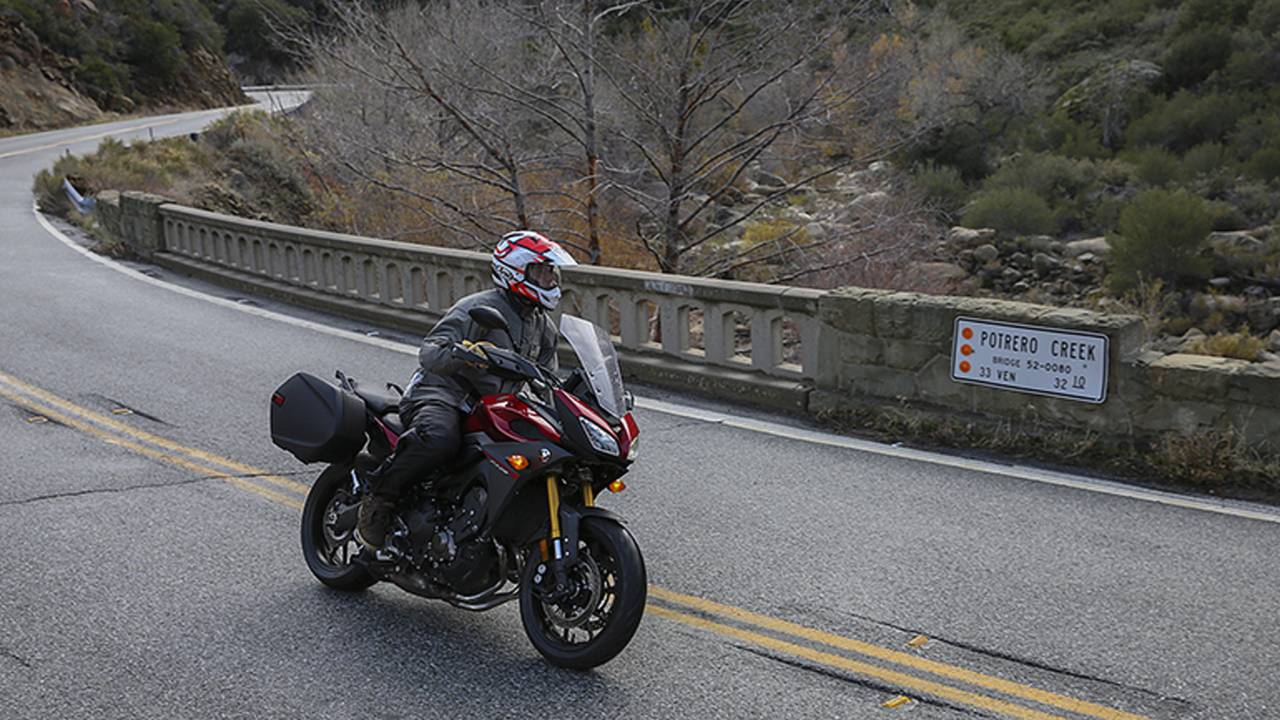 Yamaha’s 847cc, crossplane crankshaft triple is a phenomenal engine and a surprisingly perfect choice for the FJ-09. It’s insanely smooth all the way through the rev range, torquey in every gear, responsive and torque was linear with no clear sweet spot in the rev range. The first iteration of this engine design was covered in negative reviews saying it was too torquey and hard to ride at low speeds, but those issues are no more.

It’s easy to manage and great for a novice or experienced rider alike. According to Yamaha the engine was remapped to a setting that’s “best suited for sport touring,” which essentially means it’s smoother and maybe geared a little higher. 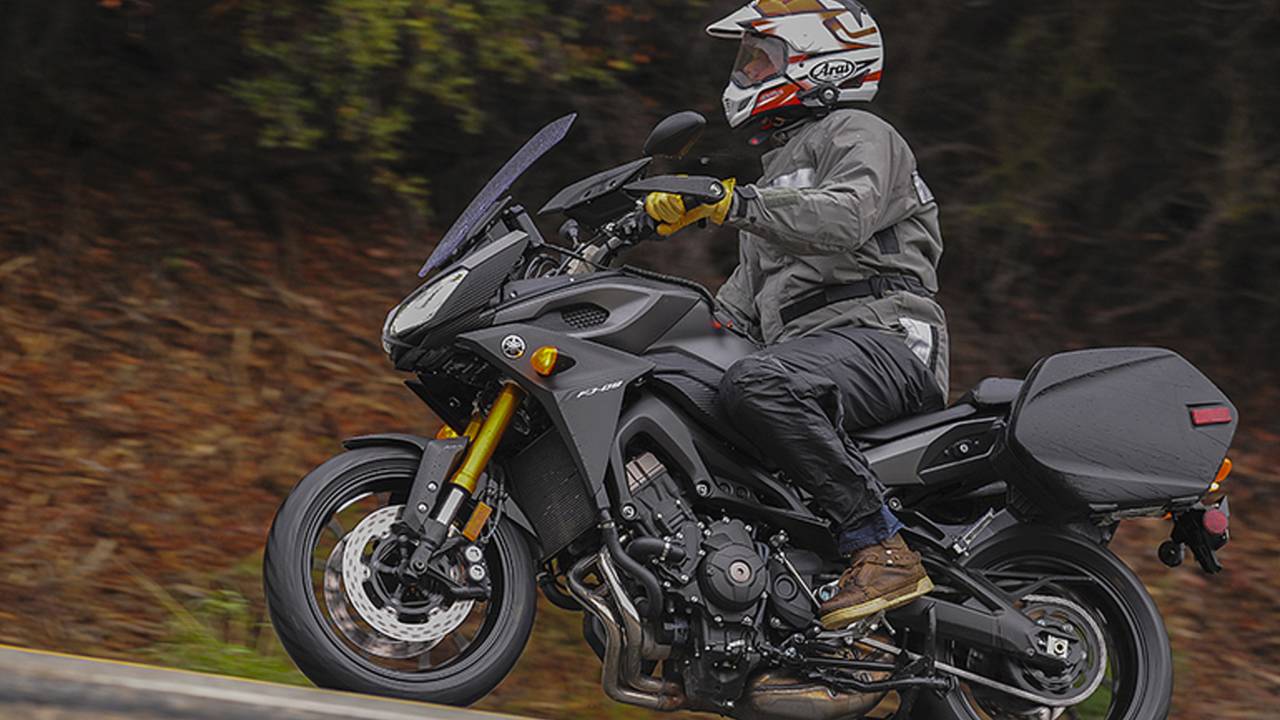 On the highway it was comfortable and didn't scream too much. It can use more top-end power, but wasn’t uncomfortable.

According to Yamaha it makes 65 ft/lbs of torque at 8,500 rpm and around 115 hp at 10,000 rpm. That’s certainly not rocketship fast, but incredible for such a compact engine design. The torque is still very snappy and fun, despite the new tune. 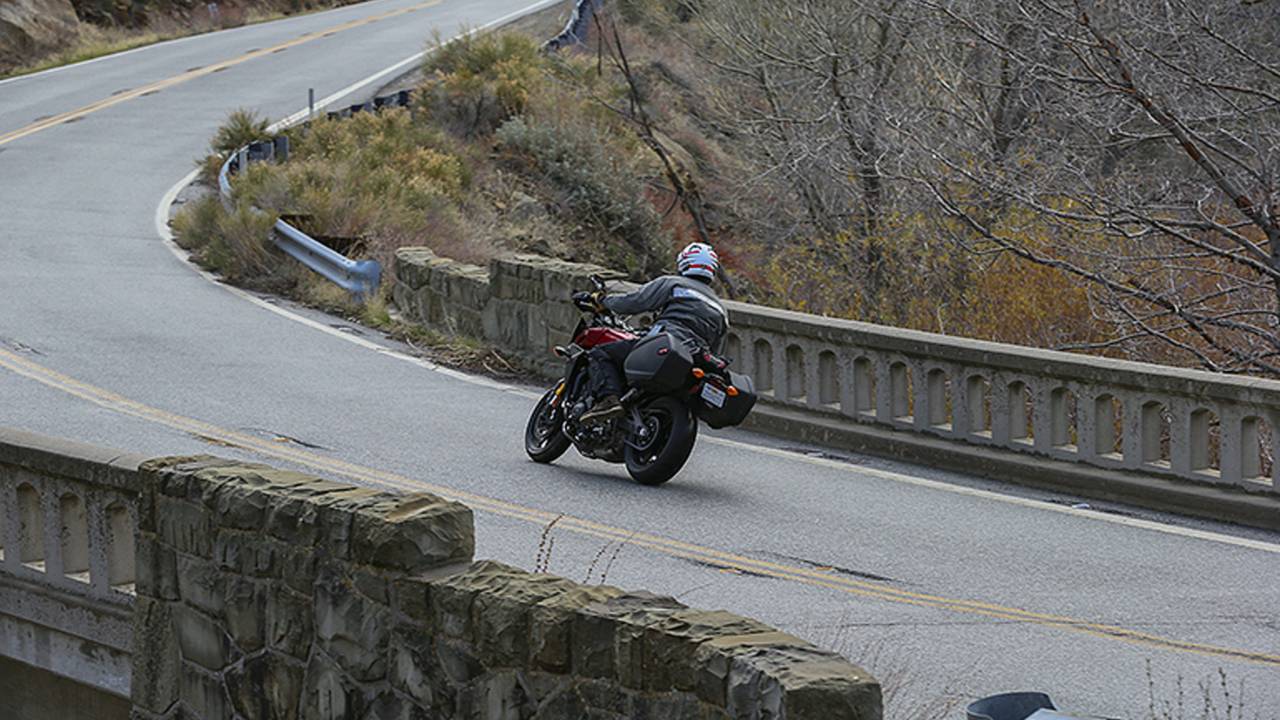 Like the FZ-09, for the bike’s engine displacement, it’s a very small motorcycle. One might think that the bigger engine would result in a bigger chassis, but it doesn’t feel like that. It feels more like the size of a 500cc bike or small. The FJ-09 weighs in at 462 pounds.

At first glance, the added weight in the top of bike made me expect a top-heavy ride, but it didn't feel like it. I felt that extra weight there, but the ergonomics counter-weighted the effects.

The seat height is 33.3 inches (adjustable to 33.9 inches), which is a bit tall for shorter people, but not too intimidating in a ride. The upright bars and smooth power make it a viable option for the inexperienced rider, but the seat height may throw them off a bit. 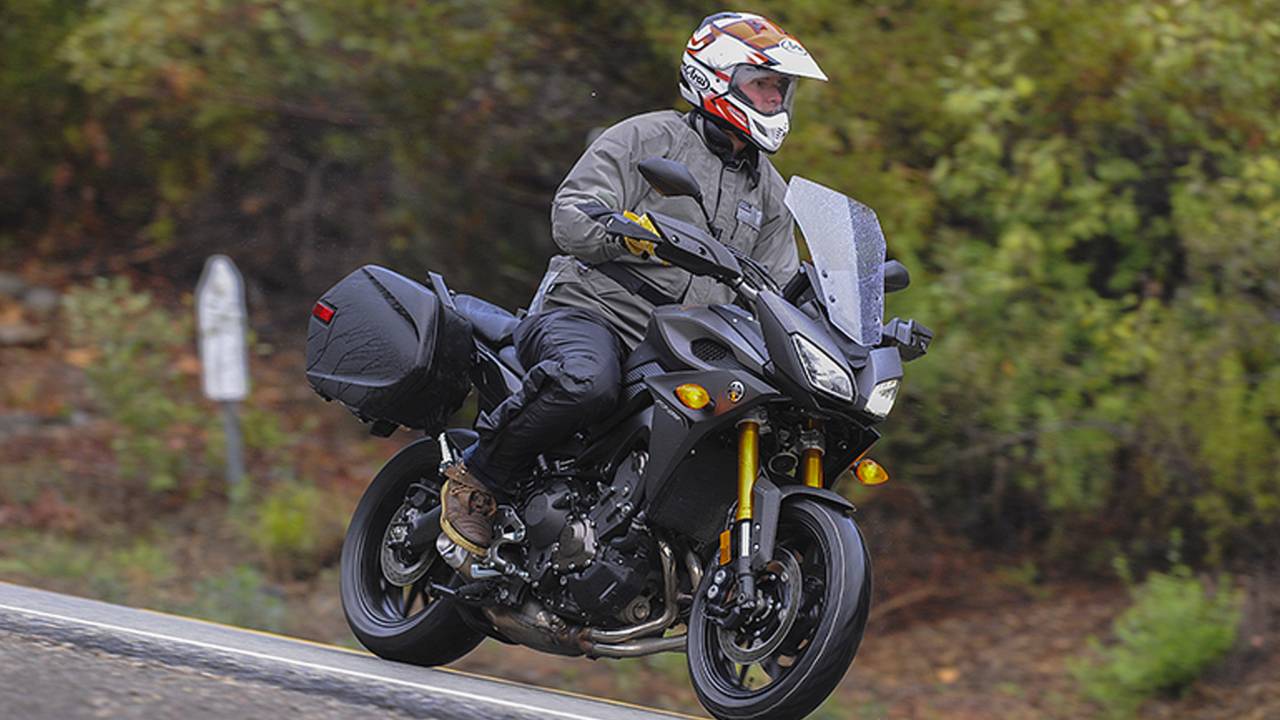 Luckily this primarily European-market style bike is making its way across the pond, slowly. Yamaha did this as a US launch, but Kawasaki’s Versys launch was European only. These bikes are designed for curves on crappy roads, which makes them fun in a variety of places. The FJ-09 may be less fun on the highway, but then again, your fun is already limited. (I mean you’re on the highway.) If you want better highway riding, buy a bagger with cruise control.

The FJ-09 can do everything well, but nothing exceptional I will say, except for maybe sheer cornering fun thanks in large part to the Dunlop Sport Max D222 Roadsmart II tires. While it's fun it isn’t 600-sportbike fast in the corners, it’s easy to maneuver at low speeds, it's just okay at high speeds and it’s extremely limited by the tires for off-road riding. The It feels like a grown up KLR, with less suspension travel. 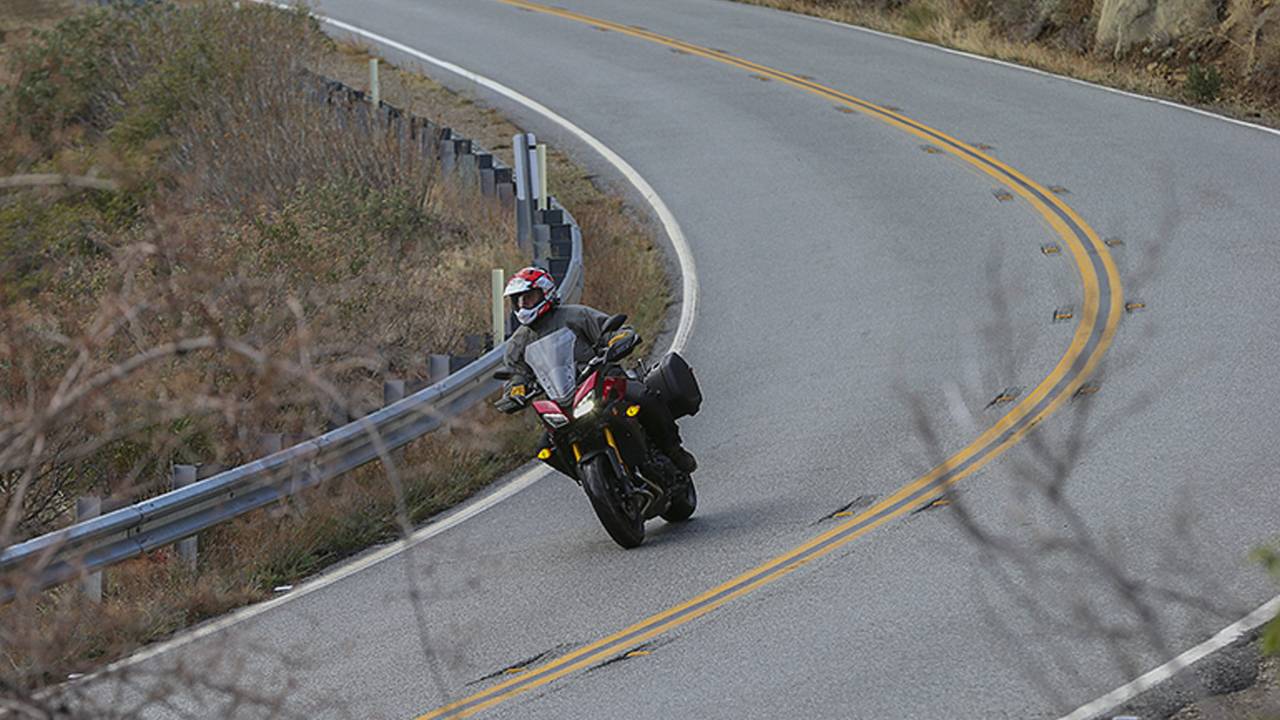 Here’s where everyone has been scared. The FZ is a steal, but the FJ-09 at $2,500 more might make a buyer wonder if it’ll be worth the extra dough. The fortunate thing is that the price reflects an optioned-out bike with ABS and traction control. The only thing left to spend money on are the accessories, like hand warmers and racks.

ABS and traction control alone are typically around $1,000 for other bikes and the FJ comes with a fairing, windscreen, bigger seat and tank along with hand guards and a large LCD display. Ultimately it’s not as much of a steal as the FZ, but the FZ was a lot more stripped down. The FJ easily beats out the competition Yamaha is up against, like the Kawasaki Concours ($15,499); Yamaha FJR1300A ($15,890); and BMW K1600GT at $21,650. While all of those bikes have more power and would be more comfortable on the highway, I’d still like to own the Yamaha as it’s a little more versatile than the competition. At $10,499, The FJ is competitively priced, Yamaha just raised the bar too high with the FZ. 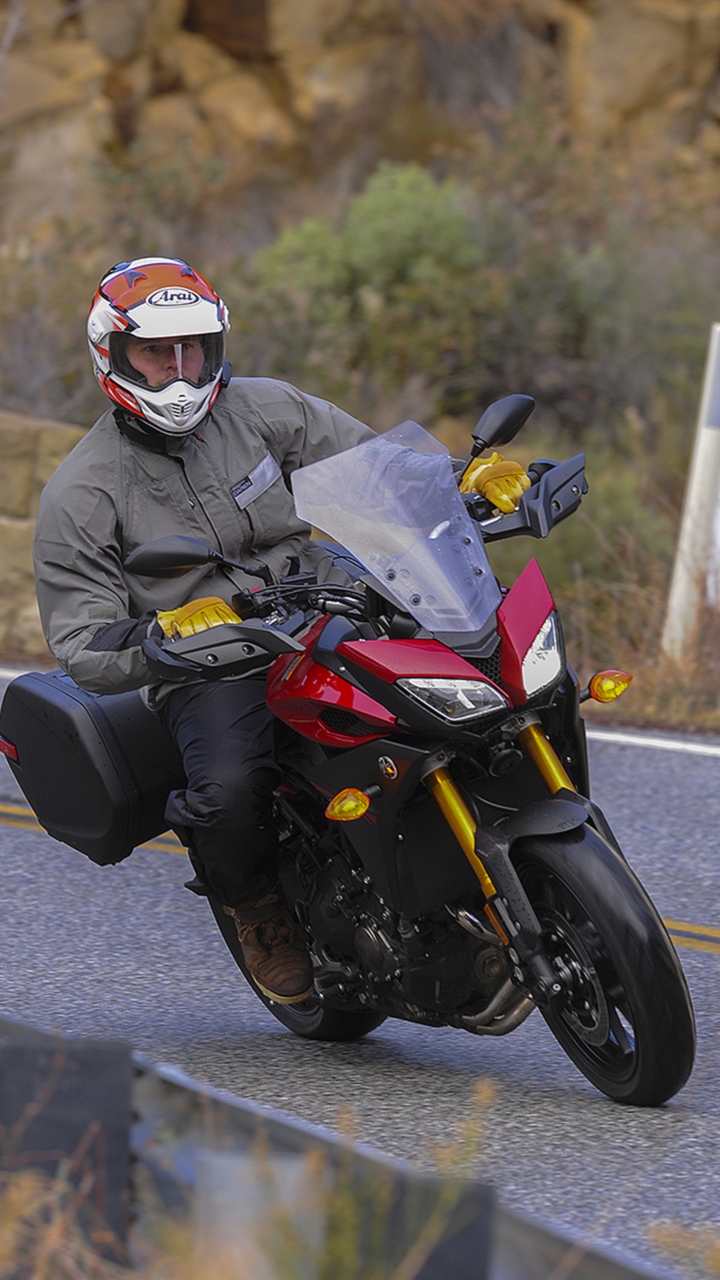 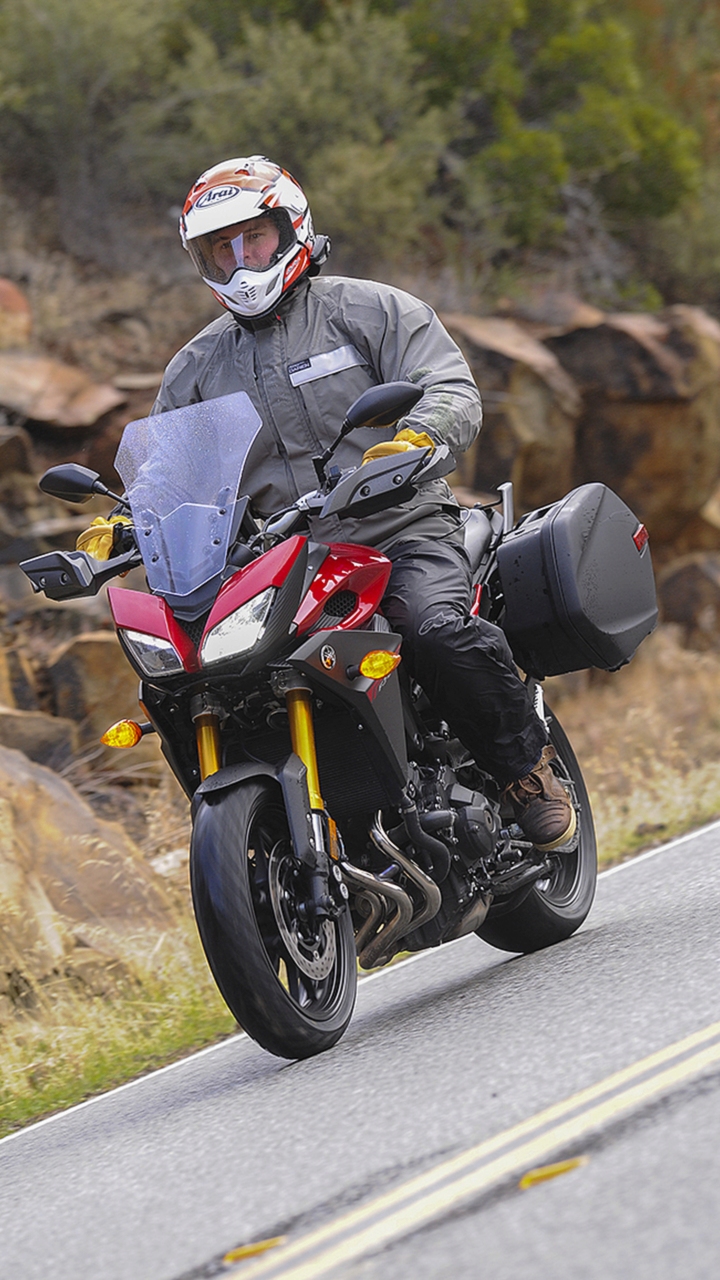