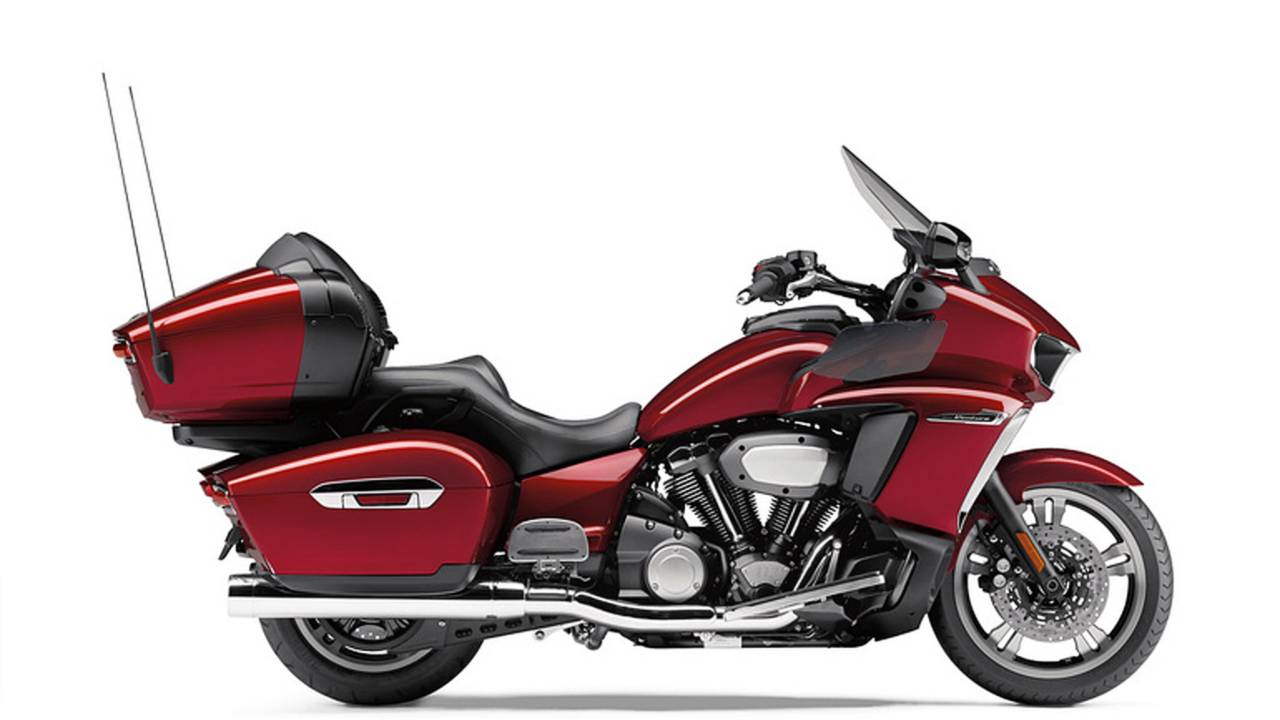 The all-new Star Venture is Yamaha's latest entry into the world of full-dress touring bikes.

Yamaha has unveiled an all-new luxury touring cruiser: the 2018 Star Venture. While it shares the Star name with previous bikes in Yamaha’s cruiser lineup, the Venture is an all-new offering from the motorsports giant. It was designed from the ground up to deliver a motorcycle with, according to Yamaha, “technology and comfort features that will redefine the luxury touring motorcycle market.”

That’s a pretty bold statement. Having had the opportunity to check out the Star Venture in person however, I can safely say it isn’t just hyperbole. It boasts an all-new powerplant, modern riding aids, attractive muscle car-inspired styling, and a host of other practical features that set it apart from the rest of the luxury-touring cruiser market.

An all-new, 113 cubic inch (1854cc), air-cooled, fuel-injected V-twin engine sits at the Venture’s heart. It is mounted to a robust six-speed transmission equipped with a wet slipper clutch and an overdrive for 5th and 6th gear. A centrally-mounted, 5.6-gallon fuel tank reportedly gives the bike a range of about 220 miles on a single tank at 34 miles per gallon. The Venture also boasts Yamaha’s new Sure-Park system. Controlled from the handlebars, Sure-Park features a small electric motor that provides low-speed forward and reverse movement to help maneuver the bike into and out of tricky parking situations – useful when navigating such a massive piece of machinery.

Other rider assist systems include ride-by-wire throttle control, traction control, integrated cruise control, and adjustable riding modes that allow the rider to easily tailor the bike’s performance to his or her particular riding style.

Wrapped around the bike's very big V-twin is a stiff new chassis that – Yamaha claims – in combination with an advanced suspension system, low center of gravity, and a linked ABS braking system, allows for some very competent handling in a nearly 1,000 lbs full-dresser. At the front, the big telescopic fork provides 5.1 inches of travel along with preset damping and spring rates designed to eat up bumps. Aft, the rear wheel is suspended by a link-type gas-pressurized shock equipped with a remote preload adjuster that offers 4.3 inches of travel.

In addition to its technical and mechanical whizzbangery, the Venture also hopes to shine in the rider comfort department. Yamaha says the heated pilot and pillion seats can be quickly and easily adjusted. The windscreen can be raised or lowered electronically at the touch of a button. The upper fairing is equipped with panels that can be adjusted to focus wind at or away from the rider’s arms, and the lower fairing features vents that tunnel wind towards, or away from, the rider’s legs. And heated grips keep the pilot’s hands toasty on cold rides.

Not to be outdone by Harley-Davidson and Indian, the new Venture is equipped with a fancy infotainment system. Controlled by touch screen, handlebar controls, or voice commands, the infotainment package provides the rider with systems data, access to the bike’s powerful audio system, and various communications systems. The Venture also features a Smart Key system similar to those found in most modern automobiles. This means that the rider only needs to have the key fob somewhere on their person to access the luggage, or start the bike.

The heart of the Venture’s infotainment package is a full-color, high-contrast, 7-inch touch screen designed to be operated while wearing gloves. The screen, also called the vehicle control center, provides data such as mileage, a trip computer, and tire pressure monitoring. It is mounted centrally in the instrument panel between the speedometer and the tach. The standard infotainment package also includes an AM/FM stereo system with USB and AUX connections and integral Bluetooth connectivity. It can also connect to a smartphone to provide the rider and passenger with a number of communication options.

Storage offers a capacity of 38 gallons. There are several conveniently placed cubbies scattered throughout the bike for holding small items, including a secure compartment in the fairing equipped with a USB port for charging phones and other small electronics. The luggage on the Venture can be locked and unlocked via the bike’s electric key-fob, and the rear trunk is big enough to swallow two helmets.

The Venture is an extremely handsome bike, and no wonder. Yamaha’s design team took cues from the front-end/nose of American muscle cars, giving the bike a classic look despite its futuristic lines. The quad-LED headlight setup sits in a nose reminiscent of a late-‘60s Cougar, GTO, or Barracuda. Along with the LED headlights, the Venture sports large LED tail and signal lights, LED signals on the front of the mirrors, and can be equipped with optional fog and auxiliary lights. A member of the Yamaha team behind this bike explained to me that they put a great importance on being seen and as a result the Venture is decked out with a lot of super-bright LED lighting.

There are two trim levels available for the Venture – the US $24,999 standard version and the $26,999 Transcontinental. Yamaha offers a choice of Granite Grey or Raspberry Metallic for colors. Upgrades included with the Transcontinental package include additional storage, USB ports, an alarmed security system, a CB radio (A CB radio?! Way to live in the 21st century, Rubber Duck –Ed), the aforementioned LED fog lights, an additional set of passenger speakers, which enable the passenger to listen to his or her own music separate from the pilot's, SiriusXM Satellite Radio, SiriusXM Travel Link w/ satellite weather and traffic conditions, and an on-board GPS that allows the rider to upload routes from a home computer, share them with friends, and so on. If that's not enough, Yamaha offers a broad range of accessories that allow owners to make their bikes truly unique.

In all, I was blown away by how comfortable this bike was. My only complaint is that the luggage on this otherwise solid machine felt cheap and plasticky. Other than that, with the Venture’s solid power plant, a more than comfortable saddle and ergonomics, and a suite of touring friendly features, the new Star Venture very well may be the ultimate luxury-touring cruiser.