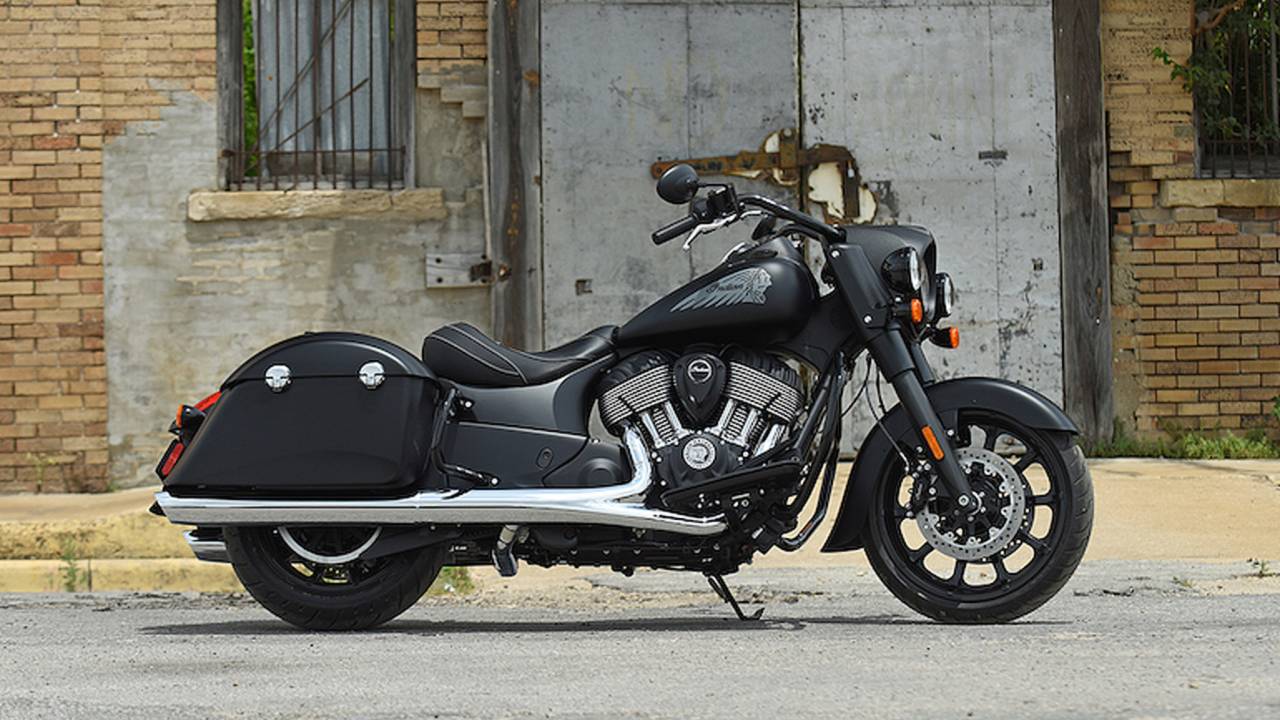 Perhaps seeking to avoid some of the "It's not a street FTR750" complaints waged against the Roadmaster Classic and Chieftain Limited and Elite models, Indian Motorcycle quietly pulled the cover off a number of new models Wednesday amid its model year 2018 announcement.

The model year announcement is standard practice in the motorcycle biz, a time when manufacturers effectively announce to the public: "Hey, you know all those bikes we have? Yeah, those are the bikes we have."

Generally these announcements are as exciting as tying one's shoes, but Indian has chosen this time around to pack its announcement with all kinds of goodies, quietly expanding the line-up to include 16 models (depending on how loosely you choose to define what makes a model different from another).

Receiving the same cut-fendered treatment as the Chieftain Limited and Chieftain Elite, along with the "just paint it black" treatment of the Chief Dark Horse and Chieftain Dark Horse, the new Springfield Dark Horse features a 19-inch wheel up front, its brawny dual front discs exposed by a less iconic "open" fender – making the bike nominally lighter (it sheds about 15 lbs or 6.8 kg).

The Springfield's new Metallic Jade over Thunder Black paint scheme is all kinds of beautiful.

Meanwhile, to tempt you to stay standard, Indian is offering the copiously chromed Springfield in a gorgeous Metallic Jade over Thunder Black paint scheme. And if you decide at some point that you just can't live without the open-fender look of the Springfield Dark Horse, said 19-inch wheel treatment is now available as an accessory for the Roadmaster, Roadmaster Classic, and Springfield motorcycles. And you don't have to buy new; the wheel and open fender will fit those models and Chieftains from model year 2014 onwards.

Following the same playbook as the Chieftain Elite released earlier this year, Indian has thrown all the bells and whistles at its top-of-the-line Roadmaster touring platform to deliver the $36,999 Roadmaster Elite. What do you get for the $7,000 premium over standard?

The Roadmaster Elite features "custom-inspired two-tone candy paint," which Indian says takes 30 hours to complete and is finished by hand. The bike features real 23K gold leaf badging on the tank and lowers, so don't ever park it out of your sight. The bike also comes equipped with the surprisingly useful Ride Command system, a 300-watt premium audio system (100 more watts than standard), passenger armrests, billet aluminum passenger and driver floorboards, a "premium" touring console, and pinnacle mirrors. Like the Chieftain Elite, the Roadmaster Elite is a limited-production model.

The Scout Finally Gets Good Tires

Also buried in the model year 2018 announcement is the fact that Indian has eliminated my biggest complaint about the Indian Scout: its piss-poor stock tires. Anyone who's ever ridden the Scout in the rain will know that its erstwhile Indian-branded Kenda tires offer all the grip of a hockey puck on ice. In Europe, where people tend to ride more regularly and in less ideal conditions, it has become common for those capable of driving a hard bargain to insist that the Kendas be scrapped at point of sale.

The top tire options among owners have been Michelin's Commander II and Pirelli's Night Dragon, with the latter generally thought to provide the best performance. Folks considering the Scout will be delighted to learn that Pirellis now come stock, along with a cartridge fork front suspension and passenger accommodations.

Riders in the US and Canada will also receive additional color options for ABS-equipped models. ABS is available on machines in Burgundy Metallic, Brilliant Blue over White with Red Pinstripe, and Willow Green over Ivory Cream with Gold Pinstripe. ABS is available on all models in Europe, which include the aforementioned colorways as well as Thunder Black and a stunningly gorgeous Metallic Jade.

Notably, the new open-fendered Chieftain will cost less. At $21,499 it is $2,500 less expensive than a MY2017 model. Of course, you'll have to settle for it in only one paint scheme: a somewhat dull Steel Gray.

If you want your Chieftain the old-fashioned way, with valanced fender and passenger accommodations, you'll have to pay the full $23,999 for what is now called the Chieftain Classic. To sweeten the deal, Indian will throw in some leather seat fringe (which you should remove immediately). The Chieftain Classic will be available in Indian Motorcycle Red, Thunder Black Pearl and Star Silver Smoke.

The presence of a $21,499 open-fender Chieftain sort of negates the point of paying $3,000 more for a Chieftain Limited in my eyes, but... uhm... you do get a better stereo and more paint schemes, which now include Thunder Black Pearl, Blue Fire, and Bronze Smoke.

Meanwhile, the Chieftain Dark Horse is now equipped with the Ride Command infotainment system, which means it's now as good as the Chieftain. But somehow costs more.

In other words, buy a Chieftain. It's arguably Indian's best, most functional big twin touring model and all the bits and bobs of other models (seats, fairing lowers, top box, highway bars) can be added at a later date if the mood strikes you.

Other Tweaks and Additions

Splitting hairs as finely as possible, Indian's standard cruiser platform is now available as either the Chief or the Chief Classic. I had to spend a long time trying to figure out the difference between these two: paint and wheels. The $18,499 Chief is available in boring ol' Steel Gray and comes equipped with tubeless-tire-accommodating alloy wheels. Fork out an additional grand and you can get the Burgundy Metallic Chief Classic with impossible-to-clean spoked wheels and whitewall tires.

The Chief Vintage is now available with black leather seats and saddlebags, as well as a Thunder Black and Star Silver over Thunder Black paint scheme.

The delightful Scout Sixty retains its miserable Kenda tires (meh, you can replace them), and is available in two additional colors: Polished Bronze, and Thunder Black over Titanium Metallic.

Folks visiting the Sturgis Motorcycle Rally will be the first to get a glimpse of the full MY2018 line-up. Everyone else can expect to see the new models arrive in dealerships from September.