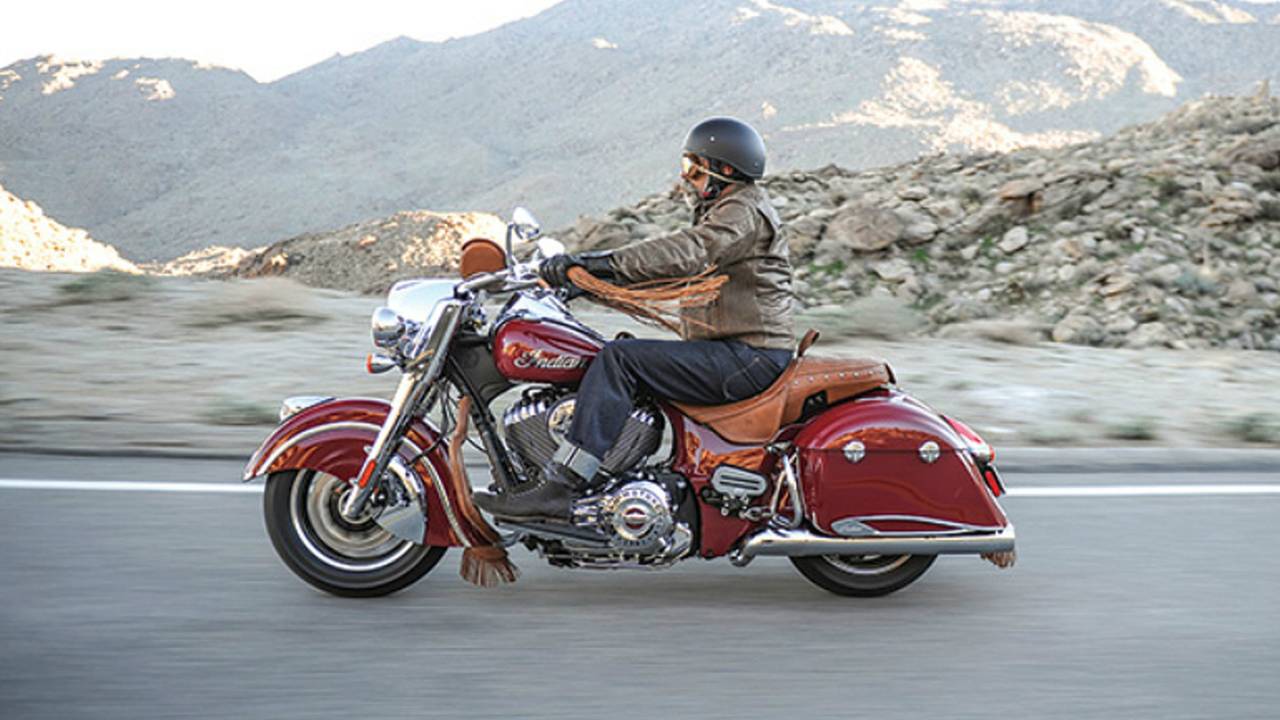 The 2016 Indian Springfield pairs the classic look you love with a ride fit for this century.

Just got back from Daytona Bike Week where we rode the new Springfield for two fantastic springlike days! We started out from Indian's secret storage and test facility outside Daytona, taking back roads up to historic St. Augustine, which is said to be the oldest continuously occupied European-established settlement in the contiguous United States—dating to 1565.

The big 111 inch V-twin quickly rumbles to life, cold, warm, or hot. It quickly settles down into its thumpy rythym, and is soon ready to roll. Pulling the big (818 pounds claimed dry weight) machine off the sidestand, it feels pretty, um, husky. But get moving, and thanks to the reduced rake and trail on this model, the steering feels surprisingly light— particularly when putting along at low speeds, which you get to do a lot around Bike Week.

Throttle response is smooth during acceleration, although there's a little lurch during coastdown because the fuel gets shut off to reduce emissions, and then it has to come back on just before reaching idle. With a claimed 119 ft-lbs of torque on tap, there's no problem accelerating, passing or merging, just roll it on and shift once in a while. With more displacement than Harley's largest CVO engine, there's sufficient power on tap to haul a passenger, lug two saddlebags and a tail trunk stuffed full of traveling gear, and cross the Rockies. That big air-oil cooled engine does make a lot of heat, especially under the right leg, and as the weather gets hotter, that may become more of an issue.

The cable-actuated clutch has a moderate pull and is easy to modulate. Pull the lever, push down on the foot-shift lever, and an audible “thunk” lets you know you're in gear. Each shift is accompanied by a similar sound, just to let you know it's not a sportbike, fer heaven's sake! Neutral is easy to find, and the gear ratios are well spaced, with tall gearing in sixth making highway runs relaxing.

That tall removable windscreen pushes the wind aside effectively— shorter and taller screens are available as accessories. Seating is comfy enough for all-day rides, and the pillion pad is removable for that solo look. Buckhorn bars reach back toward the rider, allowing a neutral upright riding posture that's also comfortable.

Modern amenities such as remote locking saddlebags, cruise control, ABS, and tire pressure monitors are well hidden to keep that vintage styling. Yet, they work just as well that way (a hidden sound system would be nice, hint hint). Saddlebag volume is the same as on the Chieftain/Roadmaster and the accessory tail trunk is the same as the Roadmaster's. The saddlebags can be unlocked and then removed in a couple minutes, and the bike is designed to look good with them removed; no ugly brackets or mounts.

Overall, Springfield is a good-looking, well-made machine that makes the miles melt away effortlessly. It's not cheap, but the quality, engineering and reputation of the brand should help it retain value, and the removable bags and windscreen give you two bikes in one!