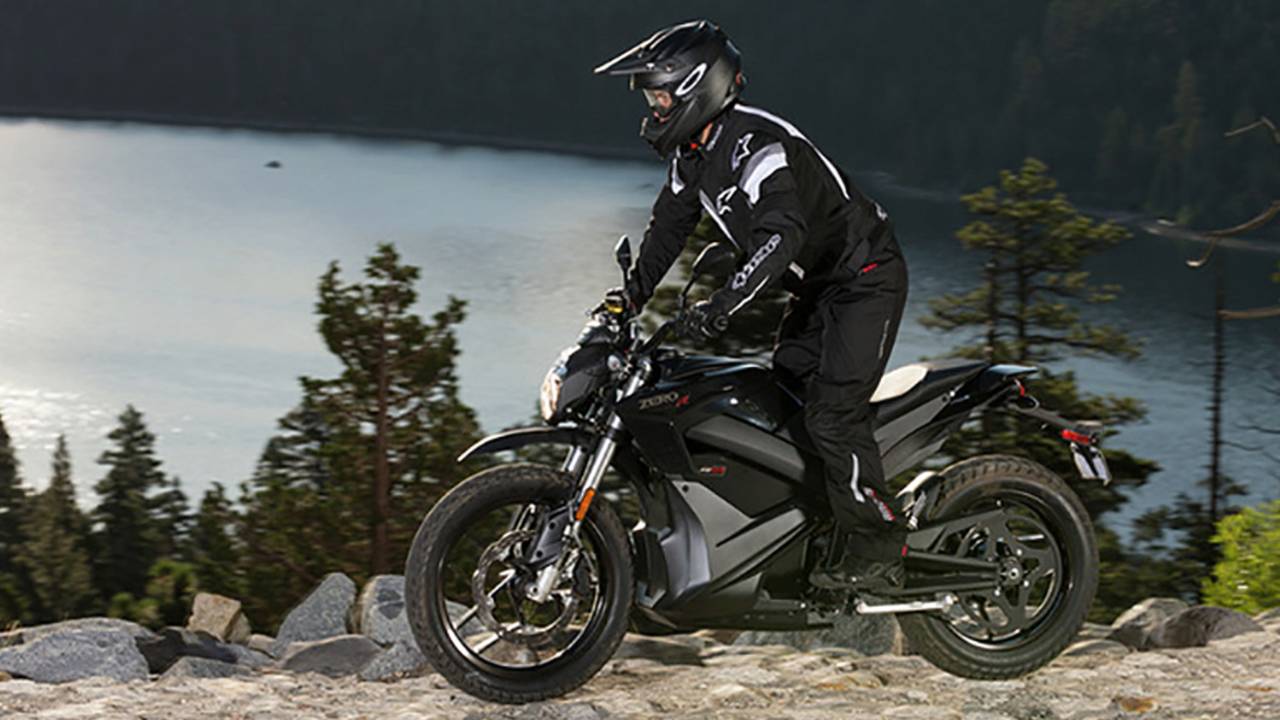 The 2016 Zero DSR is a step in the right direction for electric motorcycles, but it also highlights the issues these bikes still face.

Zero's new dual sport DSR model— an upgraded version of the Zero DS designed to be at home on pavement and dirt roads —brings 56% more torque and 25% more horsepower to the party. Electric motorcycles are a relatively new thing, and most motorcyclists have never ridden one before. It's a very different experience that takes some getting used to, especially when it comes to changing long-ingrained habits. Scooter riders, maybe not so much.

As I twist the right grip, the silence is deafening. With a faint whir, the new DSR whisks away with smooth yet forceful acceleration and no shifting. Quickly gathering speed, the only significant noise is from the wind blast. Because there is so little sound, it's difficult to gauge speed without looking at the speedometer, which is, incidentally, moving rapidly northward.

A 660-amp controller is paired with a new motor design that contains higher-temperature magnets, which maintain performance during extended high-speed riding. The DSR's newly developed brushless and sealed air-cooled Z-Force 75-7R Interior Permanent Magnet (IPM) motor is rated 67 horsepower and 106 ft-lb of torque, which gets you a claimed 0-60 mph sprint in 3.9 seconds. Electric vehicle technology is still changing rapidly. The IPM motor has a higher thermal capability than the prior Surface Mount Permanent Magnet (SMPM) motor design from 2013. This improves performance during hard riding and allows higher sustained speeds.

Zero uses battery packs with light and powerful lithium-ion cell chemistry, and advanced battery management systems. For 2016, an added graphene matrix in the anodes and a different percentage of metal oxides at the cathodes increased battery storage capacity by 10 to 20 percent (depending on model) for greater range from last year. The DSR is fitted with Zero’s most powerful ZF13.0 Power Pack. Rated 13.0 kiloWatt hour (kWh), it has four cellboxes, each containing 28 cells wired in series, then interconnected and installed in a waterproof box. The bike's literature states that a typical Zero DSR can last well over 200,000 miles, with the power packs still retaining 80% of their original maximum capacity.

The standard 1,300 Watt on-board charger can be plugged into any 120-volt household outlet, and takes about eight hours for a full charge. The optional “Charge Tank” effectively triples charging speed. The new higher capacity power pack can be recharged to 95% in about three hours and combined with the on-board charger, they deliver a total of 3,800 Watts of charging capacity.

With the new accessory Charge Tank, which uses the popular J1772 standard plug, riders can utilize public car-charging stations and recharge in two to three hours. The Z-Force Power Tank adds an additional 2.8 kWh of power pack storage capacity. The Power Tank comes with a power pack module, hardware and a completely new tank section, which occupies the area where the integrated tank bag would normally be. The Power Tank can be retrofitted to any 2014 or later Zero S, SR, DS or DSR model. The Charge Tank and Power Tank cannot both be used at the same time.

In addition to optional chargers and batteries, there's also a line of Zero accessories. These include top racks, handlebars, hand guards, top box and side cases, along with commuter and dual-sport windscreens.

The view and feel from the rider's seat is very similar to a Ducati Monster, with comparable riding positions. Both handlebar and footpegs are well positioned and provide a comfortably upright riding posture. The 33.2-inch high saddle was definitely designed more for looks rather than comfort; it's so hard and thinly padded that you'll be squirming within a few miles.

A taller-rise handlebar than the DS provides a more upright riding position. However, the lack of any kind of flyscreen or windshield will have you bracing against the wind blast, especially at highway speeds and into headwinds. On the compact liquid crystal display (LCD) instrument cluster, the rider can select parameters to monitor, such as motor temperature, along with speed, rpm, percentage of battery charge remaining, and power output. Controls and switchgear are fairly conventional (except of course for the missing clutch lever and shifter) and there's a mode button where the starter button would be. There are three modes: Eco, Sport and Custom.

The Custom riding mode allows riders to set their own desired performance profile, using a free Zero app designed for Bluetooth‑enabled iPhone and Android phones. Riders can adjust acceleration, top speed and regenerative braking to their exact preferences for sportier or more economical riding. The app provides two basic interfaces. One can be customized to show real-time data and acts as a secondary, more-detailed dashboard. When parked, it brings up riding and motorcycle data, helps with diagnostics and allows riders to customize both motorcycle performance and the dashboard display. The customizable display shows state of charge and real-time power usage while riding.

The first thing you'll likely notice before starting off (other than having to unplug it) is the lack of a clutch lever and shifter. Then, when you twist the “throttle” the bike moves out almost silently, with just the whirring of the belt, tires and electric motor. There's no shifting, and the bike gathers up speed rapidly with no palpable change in power delivery. The torque feels almost constant and unvarying, unlike a gas engine, which starts out with low torque, builds up to a peak and then drops off before the next upshift. Electric motors develop full torque right from zero rpm. Fast acceleration is on tap right up to 90 mph in sport mode. For its part, Eco mode reduces acceleration and limits top speed to 70 mph. Custom settings can blend properties and adjust regenerative braking.

The ride is sporty and quite firm, but with good control. Steering is light and quick and the bike corners well, but feels a little twitchy at high speeds. The MT-60 knobby tires delver quite a humming witengine noise, but offer respectable grip both on- and off-road during cornering and in wet conditions.

The Bosch ABS keeps the bike from skidding during hard panic-style braking, and works nicely. Considering the bike only has single rotors on both wheels and a grand total of three caliper pistons, it stops quite well, and braking is easy to modulate. However, on a relatively fast bike which has little “motor” braking, it's a good idea to increase the regenerative braking setting. Since you can't downshift, a long steep downhill mountain road might overheat the binders without the regen working.

Range is more difficult to pin down than a political promise, and how far you can go depends greatly on riding style, speed, hills, winds, and traffic conditions. Fast acceleration and high speeds use up battery power at least twice as fast as will slow and steady.

We wish we had Zero’s range-extending Power Tank 2.8 kWh option, which the motorcycle to nearly 16 kWh of power pack capacity. Zero claims to provide up to 197 miles of city riding, 98 miles on the highway (at 70 mph) with the optional Power Tank. Without the Power Tank, Zero claims a range of 95 combined miles, if speeds don’t exceed 70 mph. In eco mode (without the Power Tank) we managed about 35 miles riding at 65 to 70 mph, with 52% charge remaining. That's perhaps just enough to get back home, for a total of 70 miles highway range at 65-70 mph.

Editor's Note: We just got our hands on the 2016 Zero SR with the Power Tank accessory.  Look out for our upcoming review.

The bike is quiet, so you won't disturb your neighbors early in the morning or late at night, and no warmup is required, so you can ride off right away. I expected problems with cars and trucks not noticing me because of the lack of sound, but that wasn't much of an issue, probably thanks in part to the headlight. However, there were unexpected problems with pedestrians stepping out in front of me— from sidewalks and in parking lots —without looking as I approached from behind them. Never hit one, but had some close calls.

For Parting Thoughts and a full spec sheet, continue to Page 2 below!

We enjoyed time on the bike and experienced riding in a new way. The bike's overall assembly and component quality, and fit and finish are all top notch. At $15,995 plus $2,674 for the Power Tank option and $1,988 for the Charge Tank, the Zero DSR is not cheap. However, there are significant federal and state tax incentives, and some of the cost is also offset by reduced fuel costs and maintenance.

So who are the likely buyers of an electric motorcycle? Certainly early adopters. You know, those folks who have to be the first to buy everything. And, of course, electronics techie nerds—whom we cherish. Commuters can ride to work and then plug it in during a shift to get additional mileage by charging at the halfway point, and will probably like getting a free charge on the boss! Environmentalists should like the idea of no emissions (although it's actually “remote emissions” since most powerplants burn some kind of fossil fuel). With no clutch and no shifting, riders with limited use of their left hand or foot may find electrics appealing. Electric motorcycles may also find favor with motorcycle couriers in dense urban areas where they don't have to cover a lot of distance, but make frequent starts and stops.

Going forward, the biggest challenges facing the electric motorcycle manufacturers are high costs, limited range and long charging times. Another problem may be the public's perception of the machines, which don't make cool noises or look flashy. All of these could work themselves out over time. The jury is still out, we'll have to wait and see!

One lucky winner will ride away on a 2016 Zero DSR electric motorcyclejust for entering the AMA Club 1924 Motorcycle Sweepstakes at one of the nation's major motorcycle rallies, the American Motorcyclist Association announced.

The winner's name will be selected and announced in October 2016.