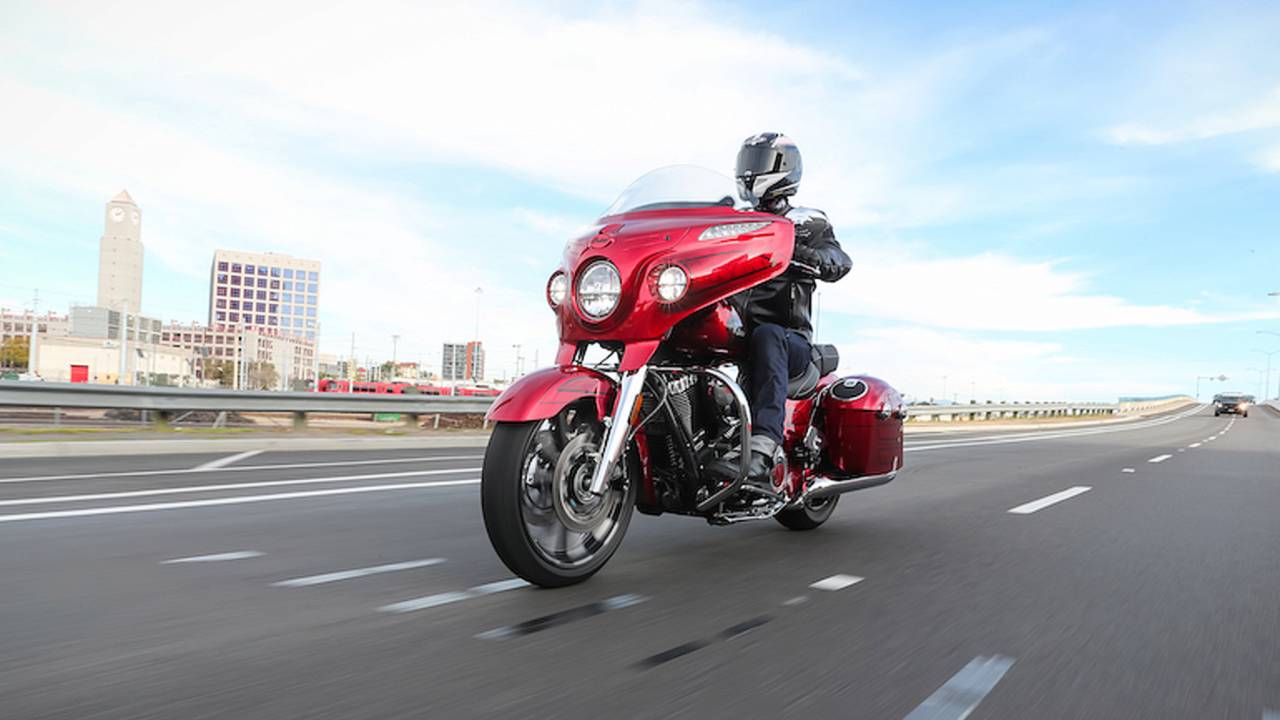 OK, let’s address the elephant in the room: the new Indian Chieftain Limited and Chieftain Elite are not really new motorcycles. They are motorcycles based on an existing model that has been blingdazzled with fancy paint, stereo components, cut fenders, and a big front wheel.

As such, how you feel about these models will rely somewhat on how you feel about the brand. Most people know I’m a fan of Indian Motorcycle, so it won’t surprise you to learn I think the Limited and Elite models make sense – within context, which I’ll get to in a bit. Equally, though, I won’t be surprised when some of you go into full hate mode. Haters gonna hate, and arguably Indian’s timing has left it open to some easy jabs; this isn’t the best way to respond to the Harley-Davidson Street Rod.

But before you fire up the TrollTron3000 let’s take a look at these two models, which I first got a chance to ride back in February.

“Our goal was to evolve the… Chieftain platform with new models that elevated the overall style of this bike significantly,” said Indian’s marketing director, Reid Wilson. “These bikes have a more commanding presence.”

The most obvious difference in both bikes can be seen at the front. A 10-spoke 19-inch wheel stands out, thanks to Indian’s willingness to take a hacksaw to its iconic valanced fender. The styling move results in a bike that looks more muscular and aggressive because you can now see the dual 300mm floating front rotors and four-piston calipers that give the massive bike its up-front whoa (while a single disc remains at the rear).

For those with more money than hearing, the Elite differentiates itself with the addition of a 200-watt audio system. One of my fellow moto-journos inadvertently discovered that it’s possible to connect your phone/audio device via Bluetooth to more than one bike at a time, which means that with, say, a half dozen Chieftain Elites you have the makings of your very own mobile music festival. Laptops, (electronic) decks, and booze will fit in the panniers, so you are always ready to party.

Helping to add to the Elite’s festival spirit is its incredibly gorgeous Fireglow Red Candy with Marble Accents paint scheme, which is done by hand at Indian’s custom paint facility in Spearfish, South Dakota (about 20 miles from Sturgis). According to Indian, each bike’s paint job takes a little more than 25 hours to complete and, because they are done by hand, no two bikes look exactly the same.

Having ridden the Elite in the San Diego sun, I can attest to the transfixing quality of its paint scheme. It exudes such exclusivity that at least a few onlookers I spoke to (a press ride always attracts a crowd) were unwilling to even touch the motorcycle. Only 350 Elite models will be sold worldwide. You may balk at its US $31,499 price tag (that’s $7,500 more than a standard Chieftain – almost enough to buy a Scout Sixty), but considering all the similarly priced and similarly styled Jack Daniels Chieftain models sold out in 10 minutes, there’s a good chance the Elites will soon find a home. Who knows? By the time you read this all 350 may already be spoken for.

That leaves you with the basic black Chieftain Limited – the model I personally prefer – which starts at $24,999.

Both the Chieftain Limited and Chieftain Elite perform more or less the same as the standard Chieftain has since we first test rode it back in 2013. The bikes’ shiny, planet-sized Thunderstroke 111 V-twin (1811 cc) delivers roughly 90 hp, according to a chart in the back of Bike Magazine (I trust Mike Armitage’s math better than my own). Indian claim 119 ft lbs (161.6 Nm) of torque at 3,000 rpm. It’s a powerplant that is a whole lot of fun in real-world applications. It can drone along endlessly from one end of the country to the other, while at the same time possessing the ability to hustle you toward a license ban when the road gets interesting.

In the same way you wouldn’t judge a GSX-R1000 on its ability to ford a mountain stream, it is equally inappropriate to get too lost in questions of whether you can get a knee down on the Chieftain Limited/Elite. Riding in tight circles around a photographer for the sake of press images will see you touching floorboards to road but otherwise there is plenty of lean angle for the situations in which these bikes are normally ridden.

According to Reid Wilson, cutting the front fender shaves about 15 lbs (6.8 kg) from the weight of the Limited and Elite, an amount that he pointed out is nominal on a bike weighing 845 lbs wet (384.2 kg). So, perhaps my feeling that the Limited and Elite are oh-so-slightly better handling than the standard Chieftain comes from that enlarged front tire. Conventional wisdom tells us that doesn’t make sense. It’s generally the case that larger wheels negatively affect cornering ability, but my own experience suggests otherwise. The Limited and Elite just feel more agile than the standard Chieftain.

Stock exhaust on both models sounds great, especially when charging up a stretch of open highway. One of the highlights of my year so far was cracking the throttle of a Chieftain Limited and getting up to (and… ah… a little over) highway speed from a dead stop on a sunny California State Route 79. The heave and roar of the engine as I rocketed forward had me shouting with joy in my helmet.

The point of riding a big twin, and, to a certain extent, the point of living. Yes, it’s a genre that can be pretty impractical, and seem woefully inefficient when compared with lighter, lower capacity, less expensive bikes that manage to be doubly as powerful. But few things really compare to the big twin experience. You know that scene in the new Justice League trailer where Aquaman is riding atop the Batmobile and he shouts, “Yeah!” like James Hetfield just before flinging himself at a pack of parademons? That’s what it’s like, y’all. That’s the point of paying so much money for such a big, heavy motorcycle.

As far as amenities are concerned, both the Limited and Elite come stocked with the same goodies as the standard Chieftain. That includes keyless ignition, remote locking panniers, ABS, highway bars, and the commendable Ride Command infotainment system.

Why It Makes Sense

Indian Magnum. I’ll admit those were the two words that came to mind when I first saw the Chieftain Elite.

“How would you respond to that?” I asked Wilson.

“Nothing wrong with that, I guess,” he replied. “I liked the Magnum.”

I did not. I hated it. The Magnum, for those of you playing along at home was a model put out by Indian’s recently deceased Polaris sibling, Victory, back in 2014. Heralded as a new model it was, of course, not really new. It was a Cross Country (a model first introduced in 2010) that had been blingdazzled with fancy paint, stereo components, cut fenders, and a big front wheel. I disliked it not because it wasn’t a good motorcycle (the Cross Country platform was top notch), but because it wasn’t a good motorcycle for Victory at the time. In 2014, Victory’s solitary engine platform, the Freedom 106, was long in the tooth and the brand needed to be producing markedly new and different models to set itself apart from newly resurrected Indian. As was often the case with Victory, the timing of such a model was poor.

But timing is part of why I don’t hate the Chieftain Elite and Chieftain Limited. The latter, in fact, is a moto I really like. As I say, the Elite and Limited, along with the recently released Roadmaster Classic don’t make a good response to the forward steps Harley is making with its Street Rod, but I think that within context they are still an intelligent if not exciting move.

This Polaris-owned version of Indian Motorcycle is effectively only 4 years old, its first production models – Chief Classic, Chief Vintage, and Chieftain – having been unveiled in August 2013. In less than four years, Indian has expanded to a now 12-model lineup built upon two different engine platforms (three if you want to try to claim the Scout Sixty’s engine is different than the Scout’s) and four different chassis set-ups. Add to this Indian’s development of the FTR750 racing platform, which has so far this year seen Indian reaching the podium at every single American Flat Track event. That’s a lot of stuff to do in four years.

Compare Indian’s progress with, say, where Triumph was in 1995 – four years after it had returned to production in 1991. Triumph, too, was getting by on two different engine platforms – an 885cc triple and an 1180cc four – and arguably had not yet managed to figure itself out as well as Indian already has (For me, Triumph has really only managed to start living up to its potential as a top-end brand in the last five years or so).

Meanwhile, with the shuttering of Victory, Indian no longer needs to worry as much about muddying the waters in terms of brand image/identity. It’s pretty much nailed the “heritage” side of things but could stand to offer more “bad-ass” machines to compete with bikes like the Harley-Davidson Street Glide, Road Glide, and, well, all of the Dyna line-up.

Lastly, ever since last year’s EICMA, when I first started to pick up the scent of something big on the horizon, Indian has been more and more overt in acknowledging that it has some exciting plans for the future. At the launch of the Limited and Elite, Indian’s team seemed very eager to let us know that something far more groundbreaking was in the works. No doubt you will have read John Burns’ interview with Wilson over on Motorcycle.com, in which Wilson acknowledges a number of times that making an FTR-inspired street bike makes “a ton of sense.” I had a similar conversation with him, but simply didn’t have the forethought to record it.

So, to my eyes, the Chieftain Limited and Chieftain Elite are not a sign that Indian has run out of ideas. These are bikes that fit within the bigger picture for a company that is dedicated to the Indian name, its heritage, and its future. For those who understand the big twin bagger ethos, they are very good bikes (the Limited is better) that will allow you to have a whole hell of a lot of fun whilst connecting to a set of intangibles that are very likely to expand and deepen in the coming years.