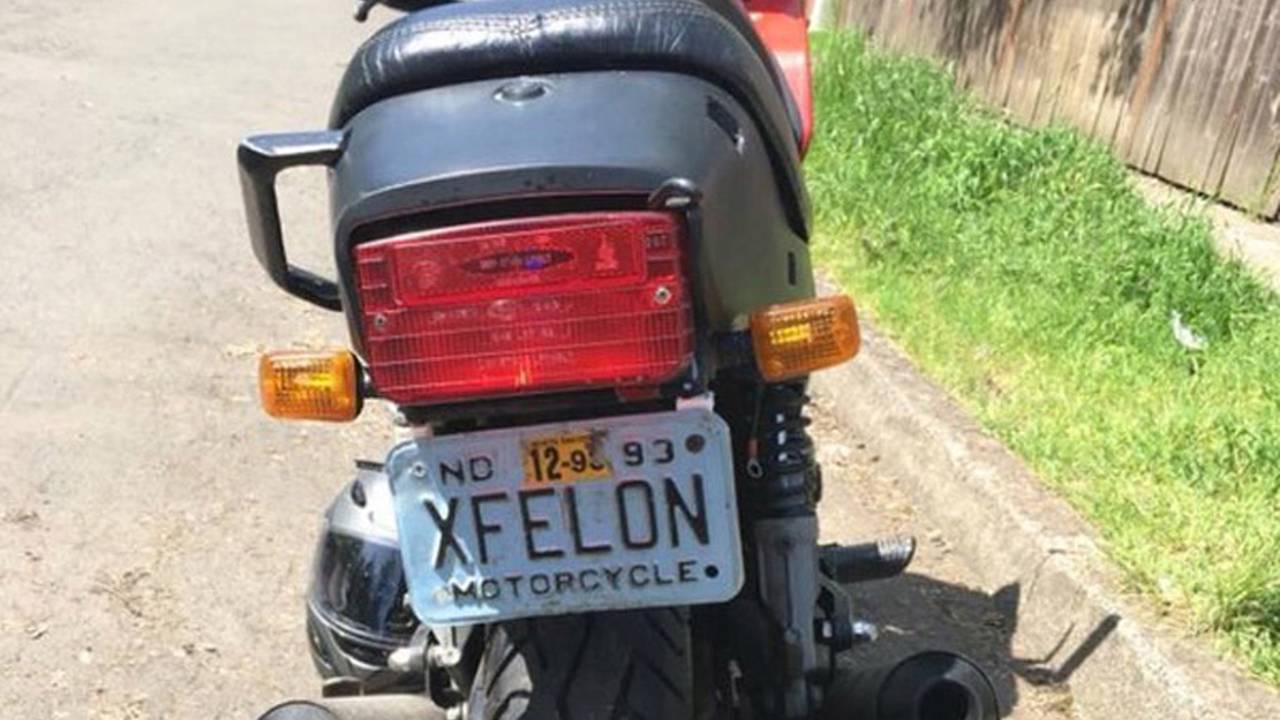 An Oregon man is in the running for World's Dumbest Criminal after fleeing the cops on a stolen Ducati with a vanity plate that read XFELON.

From the "You Just Can't Make This Shit Up" file comes a tale of parole violation, a stolen Ducati, and the most on-point vanity plate in the history of vanity plates

We've had a bumper crop of dumb criminal stories around here lately. From Florida Man to polite bike shop burglars, we've seen a lot of weird and hilarious stuff. This newest story out of Oregon is about an ex-felon on parole running from the cops on a stolen bike with a vanity plate so ironic that Alanis Morissette is gonna need to write a song about it.

According to The Oregonian's Oregonlive.com, a Springfield, Oregon, police detective was scoping out an Albertson's parking lot on the afternoon of April 25, 2018. The unnamed detective was looking for a vehicle related to another case when he spotted someone he knew all too well—known bike thief and all-around scofflaw Brock Williams. Still in his unmarked car, the unnamed detective did a little digging (Springfield PD must have SCMODS) and discovered that Williams had a warrant out on him for unlawful use of a motor vehicle.

Once he realized he had Williams dead to rights, the detective called a nearby patrol officer for backup. While waiting for the second officer to arrive so they could confront Williams, the detective watched as Williams threw a leg over a red Ducati (once again, our colleagues in the non-motoring press have let us down by not providing the year and model of the bike in question) with a North Dakota license plate that read XFELON. On closer inspection, the plate had been expired since the 90s.

"You can't make this stuff up," said Springfield Police Spokesperson Lieutenant Scott Mckee. "Typically in our line of work, we usually catch the dumb ones first."

Clearly this was a situation now, and as Williams scooted out of the Albertson's lot the detective went after him. Williams had no idea he was being tailed at first, but when the detective's colleague finally showed up in a marked cruiser he realized the jig was up. Williams took off and led the cops on a roughly half-mile chase at speeds close to 100 mph. Eventually he took a wrong turn and rode straight into a dead end and was trapped.

As Springfield PD bundled into the dead end street, Williams took off his helmet, laid it on the ground beside the bike, and attempted to just walk away like nothing happened (presumably with his hands in his pockets while looking at the sky and whistling). He didn't get far, and when nabbed by the cops he tried to tell them that it wasn't him on the bike. When that didn't work, he said he was on the bike, but he'd borrowed it from a friend to ride around in the nice weather. Springfield PD wasn't buying it. As Williams was trying to talk his way out of his situation, word came back that the Ducati had been stolen from nearby Cottage Grove, Oregon, in June of 2017. He was arrested on suspicion of violating parole, unauthorized use of a motor vehicle (again), attempt to elude police, and reckless driving.

Source: Oregonlive.com and The Register-Guard.