The 1290 Super Duke First Impressions - This Week at RideApart 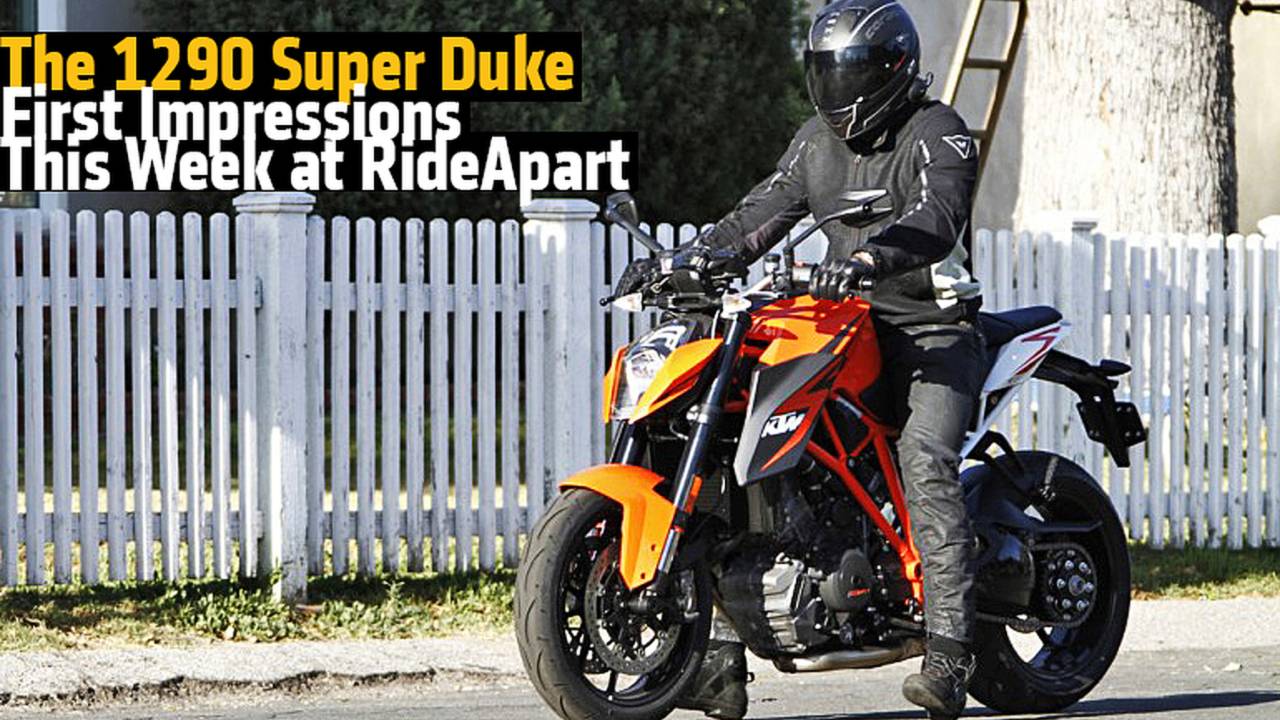 We’re riding the KTM 1290 Super Duke this week. It’s kind of like Space Mountain, you know, the ride at Disneyland’s Tomorrowland? The Super Duke is lightening fast, futuristic, weird, exciting, expensive, and often accompanied by a crowd of people who don’t know what the hell is going on—and the acceleration feels like a punch in the gut.

Note: This is our 5-minute review of the 1290, an initial overlook of the bike while we've only had a few miles on it. We'll have a much more in depth review soon. Please comment below with any questions you have about the bike, to be answered in the in-depth review.

We've only just picked up the 1290 after bugging KTM. Last week, I received an email: “We’ll have a 1290 Super Duke ready for you to pick up on Monday.” Ummm, hell yeah. We didn’t exactly ask for a Super Duke, but I sure as hell wasn’t going to complain. It’s like looking a gift horse in the mouth, only this gift horse is a champion-winning thoroughbred.

READ MORE: 5 Reasons You Should Ride A Naked Bike | RideApart

We hit the road and ventured out to KTM’s headquarters in the Inland Empire (which is basically the desert immediately east of LA). KTM’s North American headquarters are unsurprisingly housed on the same lot as Husky.

We arrived at KTM headquarters for a quick tour. KTM is far more concerned with it’s off-road market. They’ve claimed to have dominated in US off-road yearly sales for the past three consecutive years. Those sales also outnumbered all of the Japanese brands combined, woah. It’s laughable how the company seemingly looks at the street market as second to their off-road dominance, especially when you see how any of their street models are engineering marvels.

The 1290 Super Duke is only in it's second year of production. This means it's time for KTM to an upgrade as most bikes only last 2-3 years before they're updated. Before the 1290 was the 990 Super Duke, which was down on power, but up on suspension, chassis and stopping distance. Now, that extra 300cc helps produce 180hp, putting it right there against it's main competitors in the Super Naked class with bikes like the BMW S1000R, Ducati Monster S4R, Kawasaki Z1000 and MV Agusta Brutale.

We threw our legs over the Super Duke and immediately noticed how skinny, light weight, and how low the seat height is (for a super naked). The BMW and MV Agusta feel like Cadillacs compared to this little Miata with a V8. The compact V-twin design and chromoly trellis frame make for the skinny feel. It’s a type of layout that ultimately produces a much smaller, more agile feeling to the rider—something you don’t often get with a Super Naked.

The LC8 power plant, derived from the KTM Superbike 1190 RC8 R, has the most elegant torque curve of almost any V-twins we’ve ridden.

It’s, of course, heavier than the Duke 690, but for a 1,300cc bike it’s not that heavy at 432 pounds dry. The 690 is essentially the same bike with similar suspension (just a little smaller front forks), frame and geometry. The 1290 is a V-twin and the 690 a single-cylinder thumper. So, the 690 simply lops off that front cylinder and loses 79 pounds in the process.

We headed back to LA and spent an hour on the highway. It’s incredibly hard to keep this bike at the speed limit. A quick twist of the throttle entering onto I-15 and we were doing triple digits before we knew it. The engine is smooth, quiet, and calm at speed, and we at times didn’t notice we were in 5th gear instead of 6th. It’s geared high, but that’s a common complaint many hardcore moto-journalists have with big, naked bikes. For me—someone who sees a lot of highway riding—it’s geared perfectly, but that’s partly due to the enormous torque the bike produces. You never need to search for the right gear.

We'll have a longer, more in-depth review soon. What questions do you have about KTM's flagship street model? Comment below.

READ MORE: A Short History of the Naked Bike | RideApart