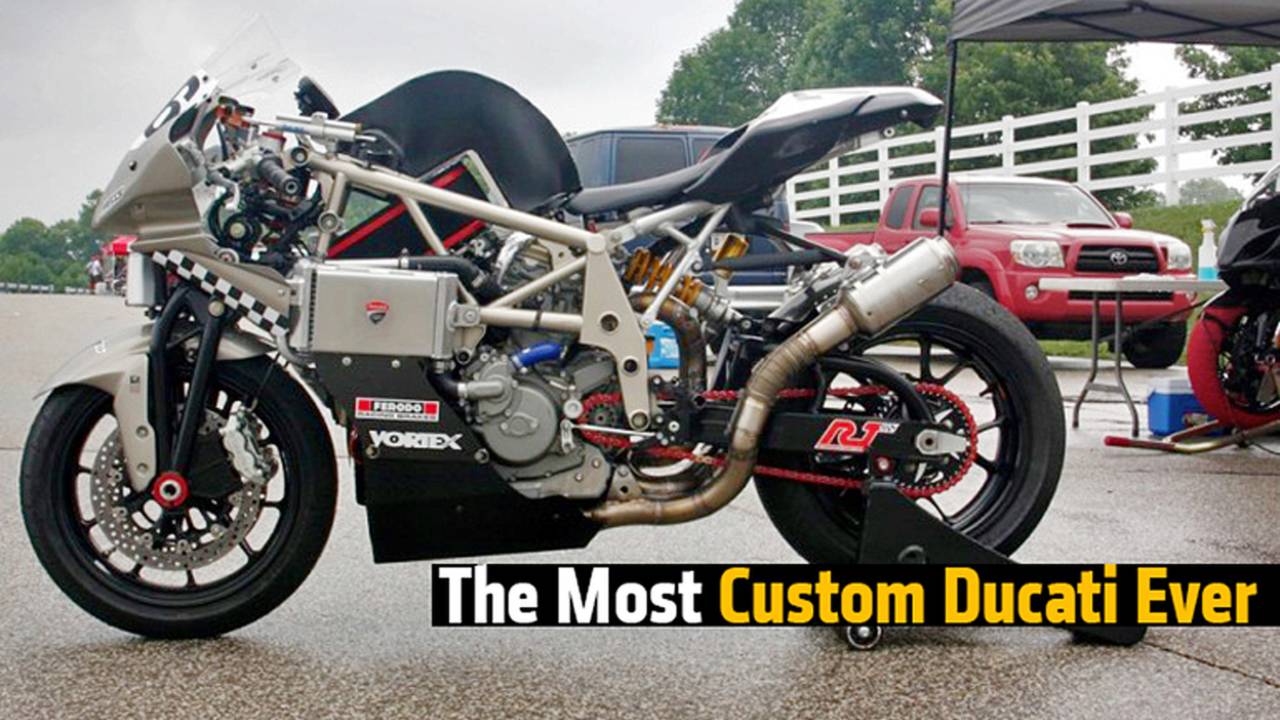 The most custom Ducati ever? You decide.

Robert Terando had a problem. He owned a 2009 Ducati 848 that, while a great bike, wouldn't handle the way he liked. So he changed, ya know, everything.

Instead of twiddling some knobs on the suspension or adjusting tire pressures like most of us would do, Terando set about building an entire new bike. From scratch.

"It felt light in the front all the time, like it wanted to wheelie off the corners. I had run across an article on the Britten, and it just kind of clicked on me. I wonder if I could take a great bike, and see if I could improve on it?"

The Britten he's referring to would be the legendary V1000, built by the late Kiwi engineer John Britten. It was a revolutionary bike for its time, breaking all the design rules followed so religiously by the big factories in Europe and Japan, and it changed the way motorcycles were built forever. Many aspects of the V1000, such as data logging, extensive use of carbon fiber and using the engine as a stressed member of the frame, still exist today only on the most advanced motorcycles.

Curiously, the most radical component of the Britten V1000, the double-wishbone front suspension design, was never adopted by a major manufacturer. But it was exactly this design that Terando chose to emulate. A tall order for the soft-spoken man from southern Indiana, but one he has the background to undertake. Terando raced at the pro level in the AMA for a few years, campaigning in the Supersport class aboard a Ducati 749 with backing from the legendary Fast by Feracci. More recently, Terando has been building and modifying chassis for AMA Flat Track teams.

That said, his first attempt at a version of the Britten front end design was, well, less than successful.

"I'd signed up for the WERA race . I took it out, did one lap and it felt pretty freakin' evil. So I came in and parked it, and went straight to the Barber Museum with a clipboard and a tape measure."

Yup. He walked into the Barber Vintage Motorsports Museum, found one of the rarest and most priceless motorcycles in the world and started taking notes.

"I had one of the guys on the floor was kinda looking at me, but he never said no or yes. So I just tried not to touch."

Now three years into his project, with as many major revisions, Terando is still tinkering. The current iteration of the machine sports 16 degrees of rake (just a touch steeper than the stock 848's 24.5!), and a longer swingarm to aid in rear traction. He also moved the engine forward 1.75 inches to help load the front tire. The engine itself was treated to a 1040cc overbore kit, meaning that every single major component on this machine is customized where it isn't completely built from scratch.

Robert works primarily in welding and fabrication, so he had a friend with a machine shop make the machined parts he needed based off of his sketches.

Terando will be the first to tell you that the machine, which he hasn't yet named, isn't quite ready to take the grid for a race. The valving in the front shock has proved to be tricky to sort out, since nobody builds anything like what he's trying to do. But if he does get it sorted, don't be surprised at your next midwestern track day, when you get passed around the outside by a machine quite unlike anything else you've ever seen.

(All pictures by Pete Hitzeman)
++
Got a tip for us? Email: tips@rideapart.com