Go See On Any Sunday, The Next Chapter and Take a Friend 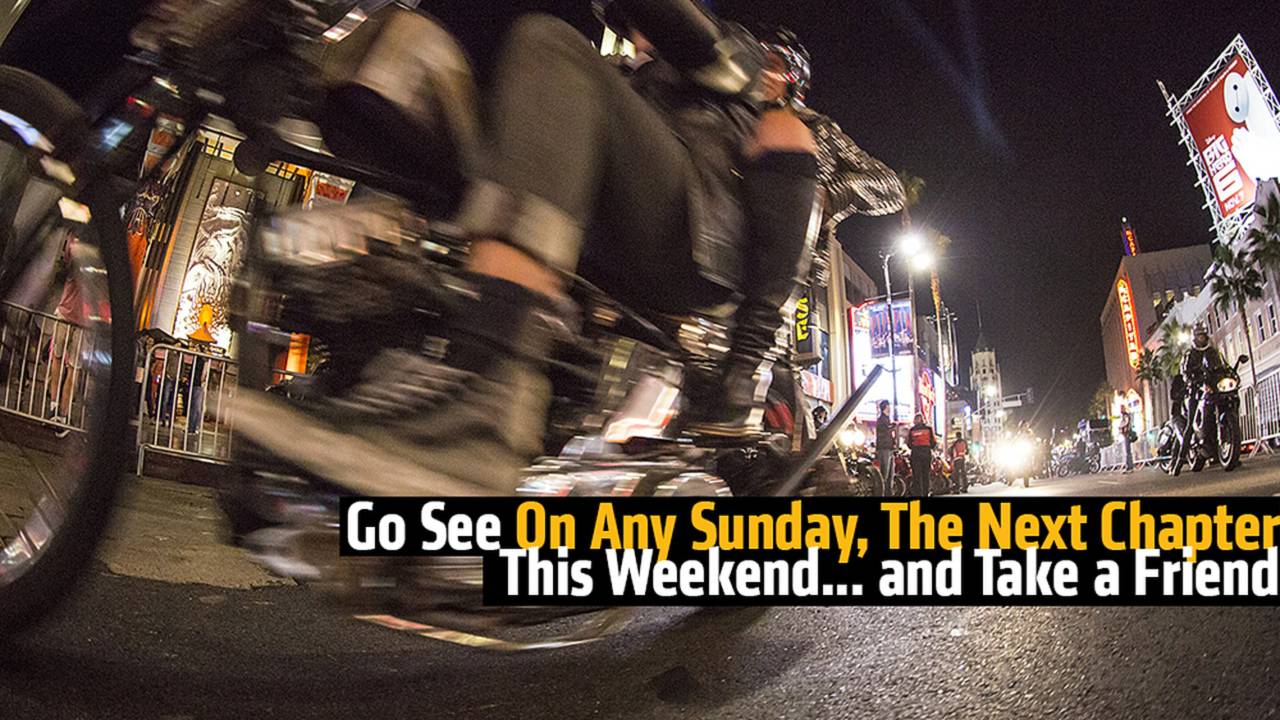 RideApart attends the Hollywood premiere of On Any Sunday, The Next Chapter.

In 1971 On Any Sunday premiered, and in a small town in North Carolina known for cigarettes and NASCAR, my father, his brother and their father took two chopped-up, raked-out Triumphs to their local movie theatre. On display at the small theatre were the two bikes for the local premier of what would become one of the most iconic motorcycle movies ever.

In 2014, On Any Sunday, The Next Chapter premieres in Hollywood, California, 3,000 miles away from Winston-Salem, North Carolina and over 40 years later, his son attends the US premier of the sequel. I one-up’ed my dad this time, who every Christmas made the family watch On Any Sunday.

READ MORE: Will it Work? On Any Sunday, The Next Chapter | RideApart

I thought about that as I listened to Dana Brown give thanks for the turnout and help on the movie next to his dad. Dana had done that same thing as I did, just on a much grander scale. His movie wasn’t better than the original, but it certainly was just as cool and has the potential to be listed as one of the best motorcycling movies. A movie for our generation of bikers... who are a lot like the previous generation.

“The equipment has changed, the technology and stuff, but the people are just the same. All the people I’ve met through Dana, the new guys, they’re all just nice, everyday down to earth people,” said Bruce in an interview earlier that week. “I mean you talk to Robby Madison, unless he told you, you’d never know what he did. He just seemed like a nice young man.”

On Any Sunday was the first movie meant to break misconceptions about motorcyclists. Bruce Brown told us a friend had taken him to a motocross track to watch a race. Damned by association, in the mid to late ‘60s if you rode a motorcycle the general, morning-news populous thought you were a big, burley, ugly, mean, lawbreaking biker.

READ MORE: The On Any Sunday KTM Build | RideApart

“I was sort of anti-motorcycle coming from the surfing background, thinking, ‘aww they were a bunch of bad guys',” said Bruce. “Once I got into it and realized that was wrong, that was part of the inspiration to make On Any Sunday, to show and sort of debunk the myth that they were all losers.”

He went to the pits after that race and expect to see big, gnarly dudes, “but they were all these little guys like me,” said Bruce. He had just finished The Endless Summer, said to be one of the best surfing documentaries ever, second only to his son Dana’s Step Into Liquid movie, and had an idea to make a documentary exposing what a motorcycle rider/biker really was. At the same time his own obsession with motorcycles emerged as he and a friend jumped on two Triumph 250 Cubs and rode from Ensenada to Cabo San Lucas, Mexico.

The studio later paid him back in full before the movie was released, but it was the first and possibly only movie Steve McQueen had to pay to be in.

Nothing will beat the original On Any Sunday, and like so many of the classics, it’s hard to analyze and impossible to replicate what made it great. Simply put, this is not as good as the original; it lacks the uniqueness and charm that only that era brought.

At times he copied his dad’s format, when I believe he didn’t need to. Dana is a good filmmaker, but lacks the ability to break into his own skin. Many critics say his family has their own format, which is arguable, but Dana didn’t see it nearly as convenient on his end. “Man, I wish we did," he said. "It’d sure be a lot easier.”

The cinematography was spot-on perfect and the movement of the storylines kept me glued to the screen. Every moment was wrapped in anxiety, excitement and humor. The humor found in the original On Any Sunday was one element that’s harder to replicate than others. It had some of the charm from the characters and the heart of the families.

Red Bull gave Dana the tools he needed to pull off a great movie. The storylines, cinematography or narration - remove one element and the rest could stand on their own.

Occasionally Dana, who narrated the movie, would speak instead of letting the moment he captured speak for itself, but ultimately I believed he pulled it off.

The Hollywood premiere was a full house with several hundred people “It was the first time that riding bikes had really been brought to the big screen. The legend Bruce Brown really exposed what motorcycle racers really were,” said the Managing Director at Red Bull Media House, Werner Brell. “It demonstrates the passion to ride is stronger than ever. I believe it's also the first time 400 bikes have been blocked off on Hollywood Blvd.”

I met up with the Venice Beach Vintage Motorcycle Club and the Venice Vixens for a short ride from Deus Ex Machina to the Dolby Theater. The streets were blocked off for motorcyclists to ride in several dozen at a time.

Tourists packed tightly against the guardrails would intently look at your face, eyes focusing and mind thinking as they tried to recognize you from a movie or TV show. Once they realized you were a nobody their heads quickly snapped to the next rider.

Up in the balcony you could see the scope of who was there, from Roland Sands to celebrity chefs; it was a packed house. Bruce came on stage introducing his son along with special guests like Mert Lawwill.

“This is pretty fancy stuff compared to what we’re used to...” said Bruce. “My favorite film maker who just so happens to be my son.”

Dana came up happier than ever, “It’s unreal to see the outpouring of affection. I love this and I love you guys.” He brought up the entire film crew.

The opening scene shows a 4 year old girl trying to straddle an electric mini bike, while her proud dad works the camera. He coaches her onto the bike and tells her to go for it, as she grabs a handful of throttle. Her helmet immediately snaps back along with her neck and arms fully extended she shoots across the yard and the camera falls as dad tries to grab her. The theatre erupted into laughter and remained vocal the rest of the movie.

As the movie was coming to an end, someone came in late hitting the back of my seat as they tried to get to theirs; it turned out to be Travis Pastrana, who was incredibly nice to talk to after the movie. That was kind of cool.

On Any Sunday, The Next Chapter opened in select theaters last Friday and will have a larger unveiling soon. Take a friend to go see it whether they like motorcycles or not. Like the original it shines a light on the cultures inside of motorcycling and exposes how much of a community we have.
++
Got a tip for us? Email: tips@rideapart.com