We Visit the Brutally Honest Hayasa Motorbikes, On Our Way Back From Alaska 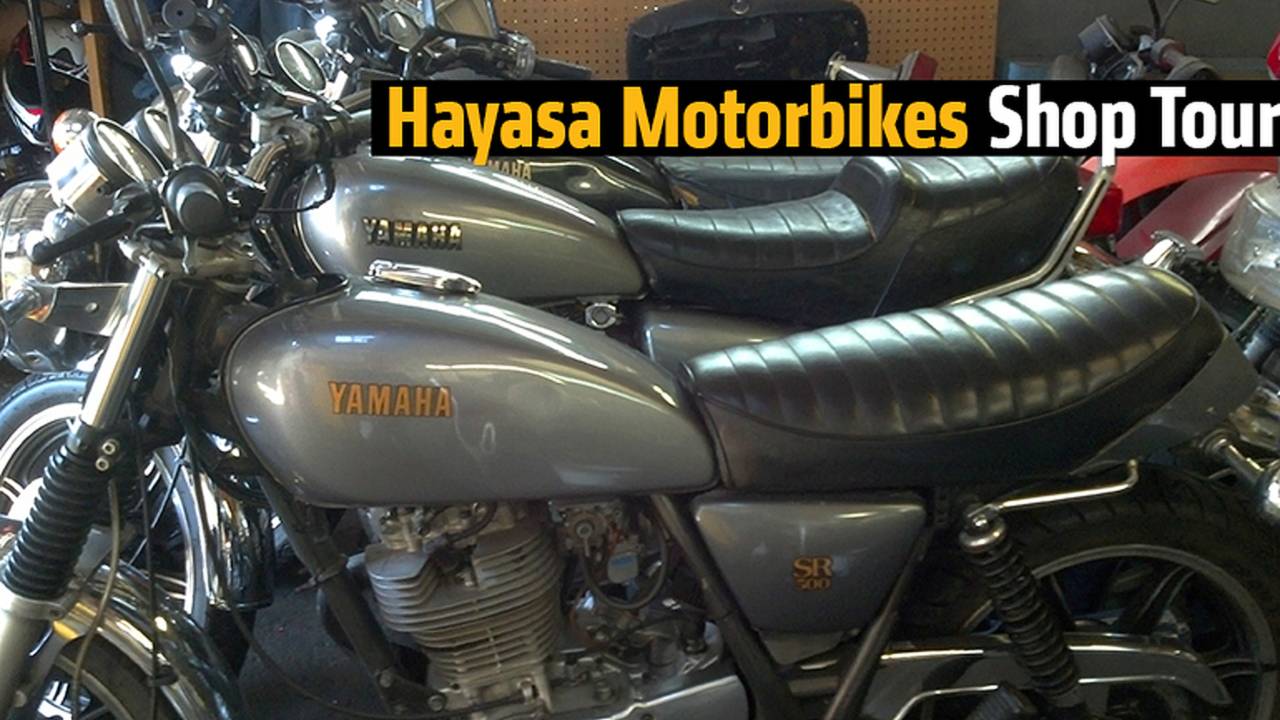 We Visit the Brutally Honest Hayasa Motorbikes, On Our Way Back From Alaska When I started a search for a good bike mechanic in Oakland, California,...

When I started a search for a good bike mechanic in Oakland, California, I was refereed to Hayasa Motorbikes.

I desperately needed new breaks before I could safely ride much more. The front calipers were saturated with fork oil at this point and slipping terribly. My mentor and trusty mechanic 3,000 miles east in Virginia, Bee, had sent me sprocket and a chain suggesting I replace them at the same time, just in case it was necessary. The chain was in decent shape, however I knew it wouldn’t last the rest of my way home.

The first time I called Hayasa I told Tyler what I needed and what I had he said he wouldn’t be able to get to it for a couple weeks. I explained I was in Oakland just temporarily and it was my only transportation.

He grunted, “Like I said, drop it off in two weeks.”

Although slightly turned off that the man wouldn’t see me right away, I knew it was a good sign he was busy with a full garage. I asked if I could at least swing by on the Radian to have him take a look at it, and see if he thought it would need anything else, just so he’d be prepared. It was for his benefit of course.

After a long groan, he agreed.

I found his garage down 10th Street, just a little ways from Lake Merritt. Outside sat a gorgeous antique car, a bright red ’62 Dodge Lancer GT with a black vinyl top.

The first thing I noticed when entering the shop was how meticulously clean and organized it was. Tyler was with a customer so I wandered around. There was a collection of SR500’s in the corner and a ’68 Twinjet 100 hanging from the ceiling. I found the right place. This was a Yamaha man.

Tyler greeted me with a sultry look but I could see kindness in his eyes.

“Let’s see what you got,” he remarked, gesturing towards the Radian.

He walked over and scanned the bike, hands on hips shaking his head. “That thing is filthy. I won't work on it until you clean it.”

I laughed, “Well I did ride it up to Alaska from Virginia…I just haven’t gotten around to cleaning it yet.”

He gave me a blank stare for a moment, “Oh great, another one of those Adventure Riders. I don’t get why you guys don’t clean your bikes…It’s like your ‘Red Badge of Courage’ or something,” he said rolling his eyes.

I liked this guy. He was honest.

After a short interaction Tyler stuck to his point. He couldn’t work on it for a couple weeks and didn’t see anything else at glace we should worry about until then.

I promised to clean it thoroughly as I jumped back on the bike and left.

A few days later the Radian wouldn’t start. I was house-sitting in Pacifica for the Veterinarian at the Zoo I was working for. I was convinced it was the thick fog and condensation that had gotten into the electrical system. The bike was soaking wet and it hadn’t even rained. I didn’t have a garage or cover so I moved the bike under a shallow awning next to the house and draped it with several towels. I pulled out the ignition box and tried to dry it in the house with a hair dryer.

None of my efforts made a difference and the more I tried to start the Radian the more I could hear the battery dying.

I called Tyler and begged him to let me have it towed. He agreed grudgingly.

While waiting for the tow driver I panicked realized I hadn’t cleaned the Radian yet! Tyler was going to kill me!!

I scrambled in the house searching for any cleaning products that would be appropriate to use on the bike. The only thing I could find was Simple Green. I went through an entire roll of paper towels and nearly the entire bottle of Simple Green in a desperate attempt to clean the Radian.

I rode in the tow truck to Hayasa, anxiously waiting getting reprimanded. It was a $100 journey. When Tyler came out all he said was, “I told you to clean it!”

I felt bad, but I was beginning to feel like this guy was going to take care of me, like a big brother would.

Tyler called me later, “This bike should not have been towed.”

Ok, here we go with the lecture.

Apparently for some unknown reason the caps to the battery had fallen off and all the battery fluid leaked out.

“You should have been able to figure this out with a little more investigation and internet use. You got to learn how to take care of your own bike!”

I agreed, and humbly thanked him for the lesson.

The Radian stayed with Tyler for another week. He replaced the fork seals and front breaks, changed the tires and the oil, and suggested we wait to do the chain until I leave to go home.

I came back to Hayasa at the end of the summer when it was time to leave. I had him replace the chain, although he decided new sprockets weren’t necessary yet. I shipped those them back to Bee. Tyler ordered me a new clutch cable and levers to carry, just in case down the road I would need them.  He was sure to remind me I should be able to fix that myself.

Before leaving, Tyler gave me a tour of the rest of his garage. One would never know there is an apartment and a second garage space just behind his front desk.  After moving there in ’98, he converted the building into not only his business, but personal living space and garage.  It was genius.

You have to walk though his apartment, consisting of a small bedroom, bathroom, and kitchenette, before reaching the other garage.  There were about twenty motorcycles in there owned by Tyler, mostly Yamaha’s, and several other bikes owned by friends renting the space from him for storage.

When I asked about his background he said he got started with motorcycles working just part time in a parts department. It allowed him to get deals and discounts to support his own habit of racing Formula Single 4stokes.  That’s why he had all those Yamaha 500s.  Then he started working full time which he refers to as his “graduate school.”  That’s when he learned more of the business aspect of motorcycles, including how “not” to do business.

He decided to go off on his own after getting fed up with the rules and protocols, such as an $18 required door fee, that in his mind took away from the honorable expertise that is meant to be provided in such a trade without extra cost.  I could only admire him more for this.  He was very modest.

I found it providential and fortunate to have met Tyler.  He felt like a big brother.  As we headed back to the front garage he said, “Grab your helmet.”

Over in the corner was a teal blue custom made ’87 Honda Elite 250 scooter with side car.  He had built it himself with several other friends.

“Hop in,” he commanded calmly.

READ MORE: 10 Things You Need To Take On A Motorcycle Trip

I couldn’t believe it.  He took me for a joy ride in that thing roaring around the block popping the side car up in the air, whipping around the streets.  I clutched the side car belly laughing the entire time.  He glanced over at me, I think to check that I wasn’t screaming with fear.  It was thrilling and a very special moment I will never forget.

Thank you Tyler for not only your expert skill and trade, but for your endearing integrity and friendship.