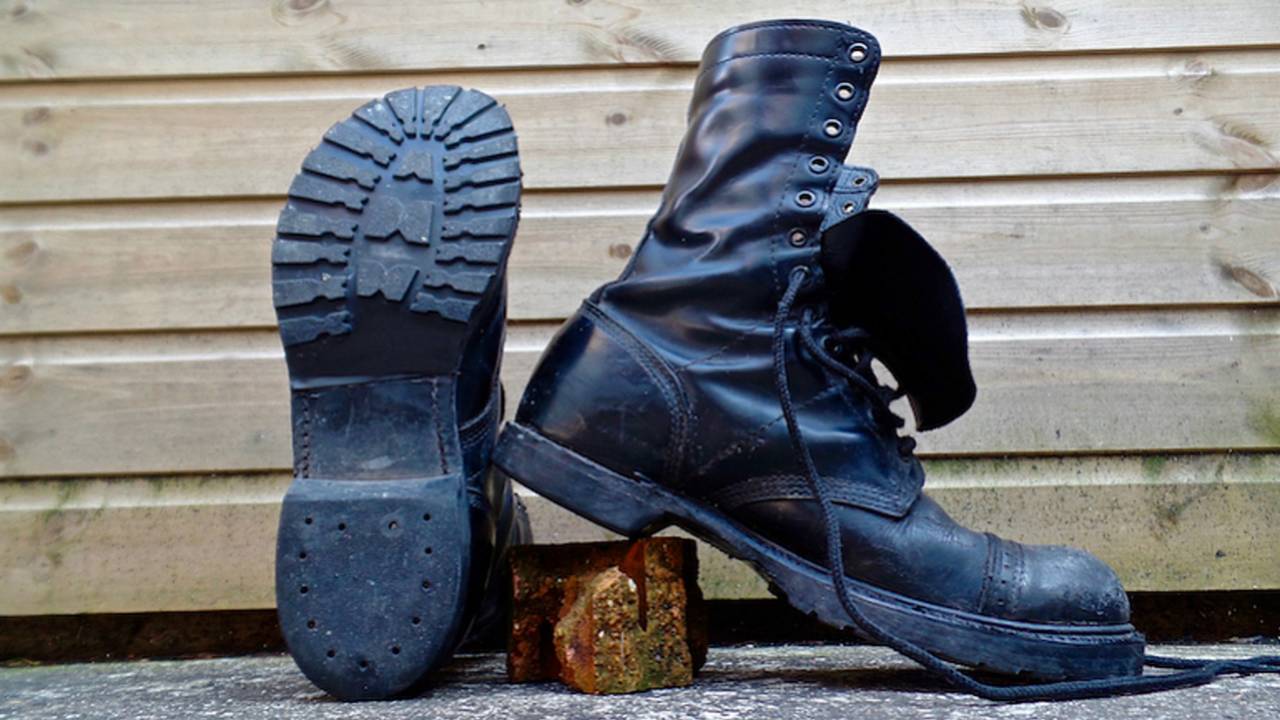 I first bought a pair of Corcoran Jump Boots about three years ago, based on the recommendation of the dog camping guy. Since then, I've put roughly 24,000 miles on them, using them in all weathers.

In Wes Siler's article from a few years back he suggests these Corcoran boots as a good middle ground between fashion, usefulness, and safety.

" little more normal to walk to do normal things in," he wrote. "I can even dance in these."

Since I grew up in Texas, where dancing consists of spinning on your cowboy boot heel while trying not to spill your Lone Star, that's not really an impressive claim. I can "dance" in ski boots. So, yes, these are dancing boots; perfect for those of you riding stereo-laden baggers and tourers, eager to bust out a boogie at stop lights.

But that's not why I bought them. I chose these boots because they are: 1) cheaper than any equivalent-quality boot I could find; 2) made in the God-blessed United States of America. Specifically, they are made in Martinsburg, Pennsylvania — a community so full-on Americana that its police department offers to check up on your house for free while you're on vacation.

The story of Corcoran Jump Boots stretches back to World War II, when US paratroopers wore them on the battlefields of Europe. Made of thick, insanely durable leather, they offer a decent amount of protection for motorcycle use in the sense that internal ankle support, a steel shank, and high lacing all help to keep the foot firmly in place.

I had to look up what a shank is: it's the bit of a shoe's supportive structure that runs down the middle of your foot, between the heel and ball of your foot. I can't feel said shank when wearing the boot, but the firmness it offers possibly explains why I have found the boot to be a good substitute for a hammer when trying to put tent pegs into hard ground.

Obviously these boots don't offer the sort of protection you'd get in something specifically made for high-speed track riding or ankle-snapping off-roading, but for everyday all-the-time use I've found them to be pretty good.

READ MORE: How To Find the Right Gloves For You | RideApart

They've become immensely comfortable over the years, to the extent that I've been known to walk several miles in them. They are unlined, so they were about as tolerable as any boot could be when riding in 102ºF Italian heat last summer.

In Britain, where warm weather is extremely rare, I find that more often than not a good, thick pair of wool socks is necessary. When temperatures drop below 40ºF, two pairs of socks are required if I'm going to be riding for more than 30 minutes.

The boots are not waterproof, but a dedicated regimen of slathering them with NikWax helps keep them fairly water-resistant...within reason. When I spent several hours riding through constant downpour in Luxembourg, Belgium and the Netherlands last autumn, puddles formed inside the boots and things took roughly a week to dry out. But I'm not sure many boots would have faired a whole lot better in the same situation.

Meanwhile, failure to religiously clean and re-wax the boots has occasionally left me with soggy feet at other times.

One of the things I like is the fact the boots lace up and, as such, can be brought tight against the calves. Because I live in a place where it rains all the time, I prefer to wear my trousers over my boots, rather than tuck them in and risk having water run down inside. Having the boots tight against my leg means they'll fit beneath pretty much any riding pant. Since Laura Llovett highlighted the importance of being specific when talking about sizes, I'll point out that the meatiest part of my calf is 15 inches around.

Additionally, I prefer the secure feeling of boots that can be laced tight. Many motorcycle boots are made for the pant-tuckers of the world and leave my leg feeling too loose and unprotected. The most extreme example of this came when I was able to kick off a fully strapped pair of Forma Adventure boots.

Corcoran Jump Boots come with a set of smooth, hard rubber soles that Wes suggested are "good for making them last," but my experience was that they wore away pretty quickly. But maybe I am just really hard on boots; I have had these resoled three times.

Which speaks to another advantage of the Jump Boots: they're easy to get repaired. High-end boot manufacturers like Daytona will sometimes repair worn soles if you take them to an official dealer and have them shipped off to the factory. But that's incredibly expensive and time consuming. Meanwhile, Jump Boots can be resoled at your local strip mall shoe repair store in a day or two for considerably less money.

The boots take a while to break in and when I first bought them they were so stupidly shiny as to make me feel foolish. But over time they proved themselves so comfortable and versatile that finding replacements has been challenging. Ultimately, I decided these aren't quite suited to all-the-time British use and bought a pair of truly waterproof boots that meet European safety standards.

I'll still hold on to my Jump Boots for summer rides — especially those that see me traveling somewhere and doing a fair bit of walking. I've treated these boots pretty rough, but I'm confident they've got several years of life left in them.