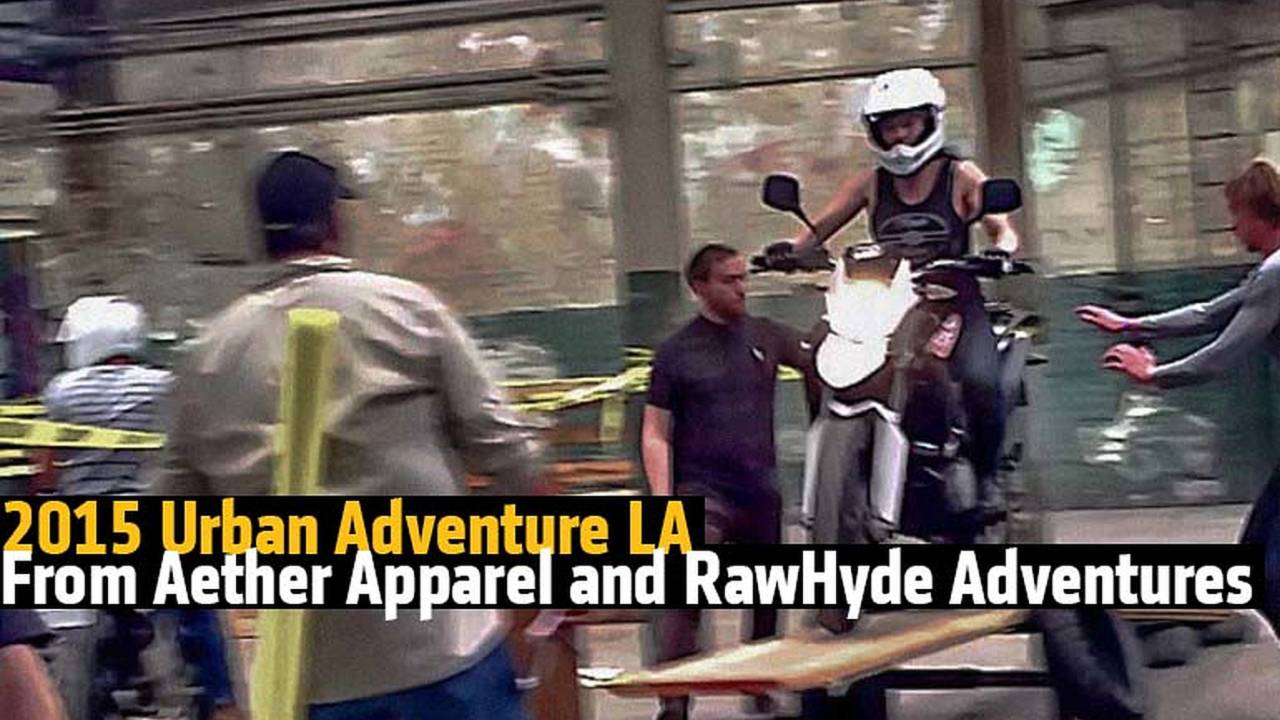 Although I arrived on time, Aether Apparel was already packed with more BMW GS’s than I’d ever seen in one place. Each one was individualized and had differing shades of dirt worn like badges of honor. While the GS was the majority, there were all kinds of bikes: old and new, sport and touring. We were there for a day of urban riding and learning with Aether Apparel, RawHyde Adventure, and LAPD instructors with the Urban Adventure LA ride.

We met early Sunday morning at the Aether Apparel flagship store in the center of Los Angeles, which is located on a block dedicated to high end fashionable clothing and furniture. The front entrance was welcoming like a ship with its gangway lowered, and surrounded by a crowd of people who were all ready for, "a day of urban motorcycle riding and technical skill training."

This was the second year Aether Apparel, who has made a name for itself with its technical and sophisticated designed gear for extreme adventures (motorcycling being just one) and RawHyde Adventures, which is famous for their adventure tours and technical off-road training, have teamed up for the Urban Adventure. Together they planned a day that had the promise of being educational, well conceived, and most importantly fun.

The anticipation grew as Jim Hyde, the founder of RawHyde Adventures, led the pre-ride briefing with his natural, confident and charismatic style. He explained that the day was to be divided into three sections: a morning ride designed by Michael van Vliet of Aether Apparel, police cone drills with motorcycle trainer Officer Kerry Schilf from the Los Angeles Police Department and RawHyde Adventure’s top secret Urban Adventure “debris field” obstacle course competition with RawHyde’s staff of trained riders. Once the morning briefing was complete, nearly 100 riders quickly returned to their bikes, geared up, and took to the streets. The morning ride explored “some of the best riding roads of the city,” which were new for most riders.

Most of the devised route was dotted with fluorescent yellow sheets of paper with arrows, so I only lost my way a couple times. Part of the fun of a group ride is getting lost and finding your way again, and the detailed cheat sheet along with my familiarity of the area made it easy get back on course.

As we weaved through the tucked away neighborhoods of Silver Lake, Glendale, Pasadena, Mount Washington, and Highland Park, I was reminded of how lucky I am to live in a city nestled into such beautiful vistas. There were sections where if you widened your view from the narrow and twisting roads, you could be transported to remote roads in the middle of a picturesque European village rather than Los Angeles just a few miles from home in the varied landscapes, vegetation, and views as the morning sun cast a beautiful glow on the still city.

As we made our way over the 6th Street Bridge, the ride culminated with the dramatic northern view of Downtown LA’s skyline against the San Gabriel Mountains. We turned into an adjacent parking lot where two revitalized brick warehouses stood. The Aether Airstream—a pop-up shop—greeted us, decked out with comfortable places to sit and cold refreshments. Bikes filed in and lined up neatly, leaving a large empty space where Officer Kerry aranged cones for his motorcycle police training drills.

Officer Kerry’s knowledge, skills, and wit kept our attention as he introduced and explained his four cone drills. While narrating and navigating his large GS through the difficult drills smoothly and effortlessly he offered up many pearls of wisdom. “To ride like a cop,” we learned we needed to “ride in control and maneuver small areas using only clutch and throttle control with eyes up and back, lock to lock.” The secret to precision riding is “to took past your obstacle and to put your eyes where you want to be.”

His police officers are trained not to use the brake, and to only use the clutch to control speed. They control speed without revving the engine, but by manipulating the friction point/zone, and blipping the throttle to keep upright. He invited us to ask him any questions we may have, as long as it wasn’t to talk about a ticket, he’s “not that guy.”

As the first group headed out, I watched and visited with friends. After lunch I hit the cone drills, fed and hydrated, they didn’t stand a chance. Weaving through the first drill of the closely spaced cones in a row with my Husqvarna Strada 650 was harder than it looked, and the first time through I put my foot down a few times. I lined up again and did it over and over until I got it.

Another drill was a narrow pathway of cones that met the fence abruptly and forced a sharp turn. With a decisive turn of my head with bars locked, my svelte Husky turned easily, and I completed 90-degree turn smoothly a few times. I kept at it until it was time for the third and final section of the day: RawHyde Adventure’s Urban Assault competition of the top-secret ‘debris field’ set up inside two different warehouses.

The Debris Room and Teeter Totter

Before the competition began, Jim Hyde explained the scoring of Urban Assault and gave a few pointers. “Do not launch. Look where you want to end up. Look past your obstacle. These are the secrets to precision riding.”

“One last thing,” he explained, “there is a teeter totter. You will not be scored on it. Only do it if you are comfortable. If not, go around it. If you do decide to do it, look through it. Go over it in a steady speed. Not too slow. Not too fast. There will be two spotters on either side, just in case a rider looses balance.” The anticipation was invigorating.

Each rider/competitor was assigned a RawHyde trainer to coach them through the course—I had the jovial Jeff Camacho. The first room was dark and added to the mystery and degree of difficulty. it was full of “debris field” objects that blurred together, some were meant to be distracting, while others depicted a meandering circuit of tight turns, narrow pathways, and figure eights. Even though I put my foot down a few times, Jeff was encouraging and offered pointers all the way through. Also, because there weren’t any spectators in this first part, it made it easier to let go of mistakes and focus on the next piece of the challenge.

With adrenaline pumping, I headed towards a burst of light that poured through a doorway leading to the next part of the course. This larger room was bathed in sunlight and filled with echoing roars from everyone watching and cheering. The shift in stimulus quickened my heart rate. I paused at the doorway to adjust. Directly in front of me was the teeter-totter confronting me like an adversary. The encouraging cheers made this challenge unavoidable—I had to face it and go over it.

Jeff was right there and told me again to look through the obstacle, to see past it to where I wanted to end up. He also told me to keep my speed consistent and to not slow down. I took a final deep breath, let the clutch out, and with a blip of the throttle was on the move. In no time, with a burst of glee from the crowd, I was up and over the teeter-totter, and suddenly gained momentum.

Like a flash, I flew—maneuvering around and over several layers of “debris field” objects and right through the door to the parking lot. My hands were shaking as I descended and turned my bike off. Returning to the warehouse, I received a huge burst of excitement and congratulations and learned that even though I skipped a section of the debris field, I had done it with skill and style!

At the end of the long day, the top three riders were determined by, slowest finisher and the one with the fewest mistakes. First place was awarded to a KTM 525 EXC Super Moto rider who chose the RawHyde Adventure’s two-day “Base Camp Alpha” gift certificate and gave it to his dad who was there spectating. Second place, was given to a BMW 1200 GS rider and who was the son of a father/son team and who only beat his dad by a few points. He chose the $500 gift certificate to Aether Apparel. Finally, third place finisher was on a 1979 Honda CB650, and took home the Spidi inflatable crash vest.

The Urban Adventure LA ride was the kind of motorcycle day that you wish there were more of. It had a mixture of great riding uninhibited by traffic and hot-doggers, it included technique and training chalk full of rider wisdom, and it allowed the opportunity to hang out with friends and make new ones.  Aether Apparel and RawHyde Adventures successfully executed their plan of a day that was indeed educational, well conceived, and most importantly fun. I can’t wait for the next one.