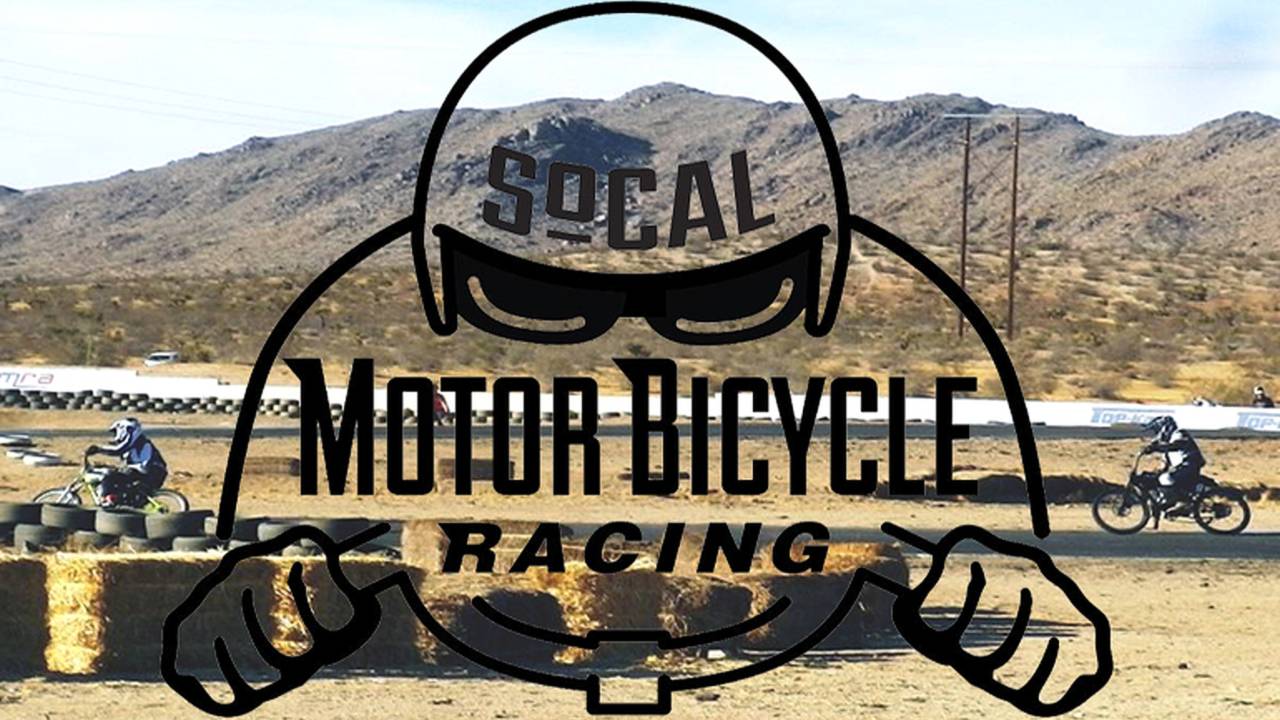 Check it out! This is SoCal Motor Bicycle Racing at Grange Motor Circuit and it looks like a ton of fun

The question of when a bicycle officially becomes a motorcycle is as hard to answer as when does a boy become a man; but legally California says it must have pedals, less than 2hp (recently updated to 4hp), an automatic transmission and a top speed of 30mph. The motorized bicycles of the SoCal Motor Bicycle Racing club may be a little bit illegal then, and officially motorcycles as far as anyone is concerned, especially the law. I went out to Apple Valley, CA. to see what the story was with these mongrels.

They say the first motorcycle race happened the day the second motorcycle was built. This particular club has been holding several races a year for five years now. And their favorite venues include go kart tracks like Grange Motor Circuit, Adams, or Willow Springs. What's really cool about racing these bikes is that this is a popular and inexpensive way to start road racing. You probably already have a bicycle, and the basic motor kits start at about $200 from various places. You are going to want to upgrade to mountain bike disc brakes if your bike is not equipped already, because coaster brake will not cut it. Although that didn't stop the rider of this bike.

There are classes for just about anything you may build too. The most popular class is the China Girl Class for bike powered by the bolt-on 2-stroke motors sold all over the internet, with a 49-66cc range (even though many are listed as 80cc, none of them actually are). The Midrange Class is for tweaked motors bumped out of the lower class, as well as home built bikes with up to 99cc and an estimated 8hp. Above that is a Faster Class with up to 11+hp, and an Unlimited Class with bike pumping out more than 12hp. If you don't think racing can be fun or exciting with single digit horsepower, you really should try it.

In these races, outright speed may be lower than your daily commute, but you are forced to maintain your momentum through the corners. With no clutch (on most bikes) and no transmission, you need to stay on the throttle at all times to keep the motor in the peaky power band. Add to that the fact that you have more than a dozen other guys, all with similar limitations, and things can get a little hectic.

So what are the rules? For people that like to tinker, the slim rule book of SoCal Motor Bicycle Racing is a dream. The rules start with the California vehicle code: You must have working pedals. You cannot have a shiftable transmission. From there they only add that you can't use "motorcycle" tires, bicycle tires only. Front brakes are required. You can use a moped type CVT "torque converter" if you're mechanically inclined enough to make it work, and you can use all the imagination and innovation you can muster to make your bike better than the other guy's.

This board track style bike was by no means the fastest out there (even with that CVT transmission) but it certainly was one of the coolest. It runs a 4-stroke OHV Honda clone motor with about 100cc. It is completely home built with a drop tube women's beach cruiser as the starting point. You can buy CVT and rear belt drive kits online to build one like this yourself, and if you hang some lights on it you can register it as a moped (just don't tell the DMV the top speed).

The trickest bike out there was probably this mash-up between a mountain bike and a Honda Super Cub. In fact it is a Motoped, sold in a kit form by a company out of Santa Cruz. Technically it can have a transmission (depending on the motor used) but I think the rider just left it in one gear the whole race, because you can't really shift with your feet on the pedals. This set up does have a huge advantage in the brakes and chassis department cmpared ot the home-built bikes. It was not dominant on the track, but ran in the top three of every race.

These are good examples of bikes you will see competing in the China Girl Class. The bike in the foreground is running a beach cruiser, with sprung fork, and basically no brakes (I've been informed a front brake is required by the rules). The bike behind it has a mountain bike front end with huge disc, and a frame with integrated fuel tank. The darker blue bike behind it is somewhere in the middle, and you can see how the seat post is modified for a lower center of gravity by putting the rider down and back, over the rear wheel.

Here is another trick home brewed frame, using an Italian direct drive moped motor from the 1970s for power. This one was also unique in using the newish 26-inch fat tire mountain bike wheels. On the road course the bikes without suspension did not seem to suffer, and the two-plus inches of sidewall ought to offer plenty of bump absorption.

This type of racing is still growing and evolving, as you can tell form the various bikes running. The hot tire choice seems to be Maxxis Hookworm or CST Cyclops for normal 26-inch wheels. But, one of the fastest bikes out there was running 24-inch wheels, with fatter tires, for the same effective diameter but more rubber. There were also at least two 20-inch BMX bikes out there, as well as several fat tire bikes.

The next race for SoCal Motor Bicycle Racing is scheduled for April 1st, 2017 at the Grange Motor Circuit. I have a 2hp Briggs & Stratton flathead motor recently liberated from an old lawnmower, and an old beach cruiser sitting in my garage just begging to get together for some on track fun. So, if all goes well I will be on that starting line on April Fools Day. I took more pictures, and as usual dumped them all in my own Motorized Bicycle Racing Gallery.