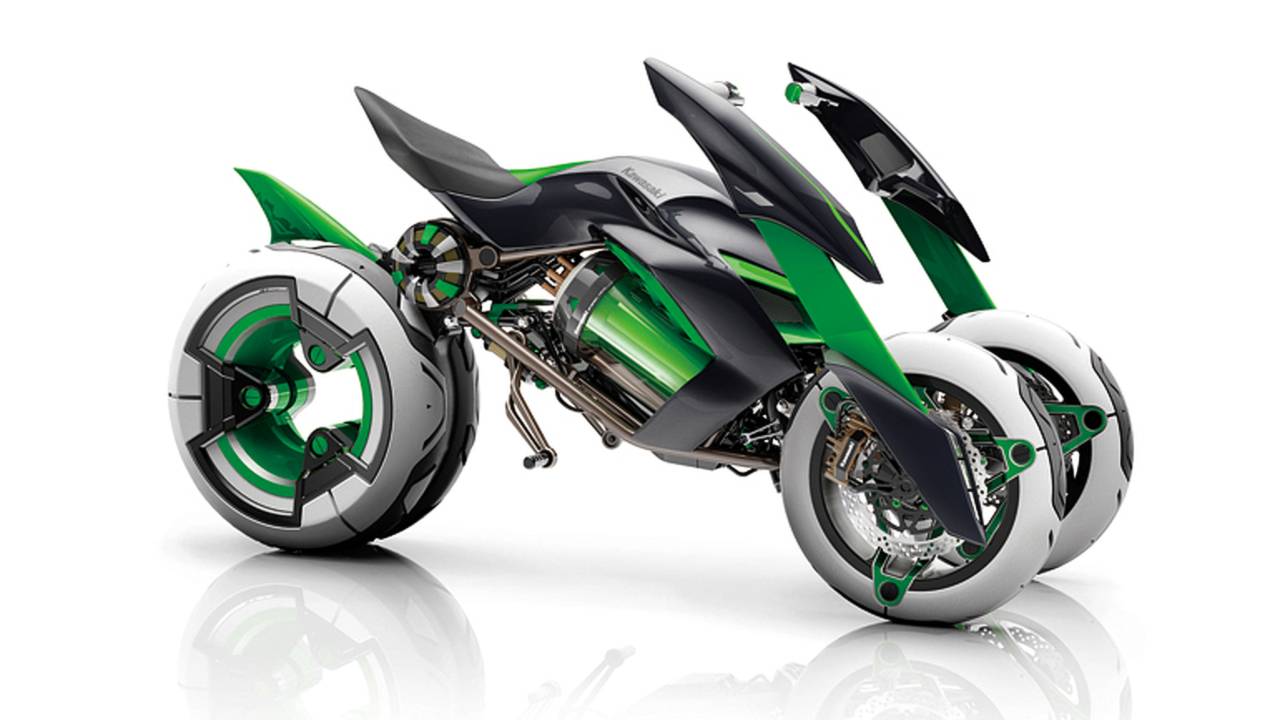 What is Kawasaki trying to tell us with this new video of a five-year-old sci-fi concept bike?

Way, waaaaay back in 2013, Kawasaki unveiled the radical Concept J at the Tokyo Motor Show. A combination four-wheeler, transformer, and Tron lightcycle, the space-aged Concept J was a four-wheeled thing that could change its frame geometry to better adapt to various riding conditions. Need high-speed stability for a run up the freeway? The Concept J stretches out like a lightcycle and eats up the pavement. Need to thrash around the narrow, trash-filled streets of your big city cyberpunk dystopia? It sits up like a retriever and spreads its wheels out for better handling.

Weird, right? We thought so too. Wes wrote a thing about it, everybody went, "Huh... HUH...", and it was mostly forgotten. It popped up here and there over the years at bike shows, and every time we were all, "Oh, it's that thing again!", but nothing really came of it. Just another interesting concept in a sea of interesting concepts.

Fast forward to today when Chris dropped a video from Kawasaki into my email. It's some kind of brand or teaser video that prominently features the Concept J. Once again, we were like, "Oh, it's that thing!" because, honestly, it's pretty eye-catching and hard to forget. The video starts out with a little montage of Kawasaki products shown on a tunnel ceiling as a rider on a sportbike blasts through it. When the rider comes out the other side though, they're on a Concept J. Then there are a lot of futuristic scenes like a solar farm and a big city at night, and lots of really cool effects representing the Concept J's HUD and interface. It's all set to a grand and sweeping score with a suitably impressive narrator telling us how awesome Kawasaki is.

READ MORE: Honda's Fancy New E-Bike Stands on its Own

Then it just ends after showing off the J's Upright and Attack modes. That's it. No "coming soon" or "inquire at your local Kawasaki dealer". Just a rad video about a rad concept vehicle. That's great and all, but I have to wonder why? Why is Kawasaki teasing us with the Concept J now, four and a half years after its debut? Are company engineers working on it? Is it coming soon to a dealer near me? Did Yamaha and Honda light a fire under Team Green with their weirdo, AI-driven Skynet bikes like the MOTOROiD and the Riding Assist Motorcycle? Did Kawasaki just want to remind us how awesome they are? It's hard to say, but if anything comes of it we'll be sure to let you know.