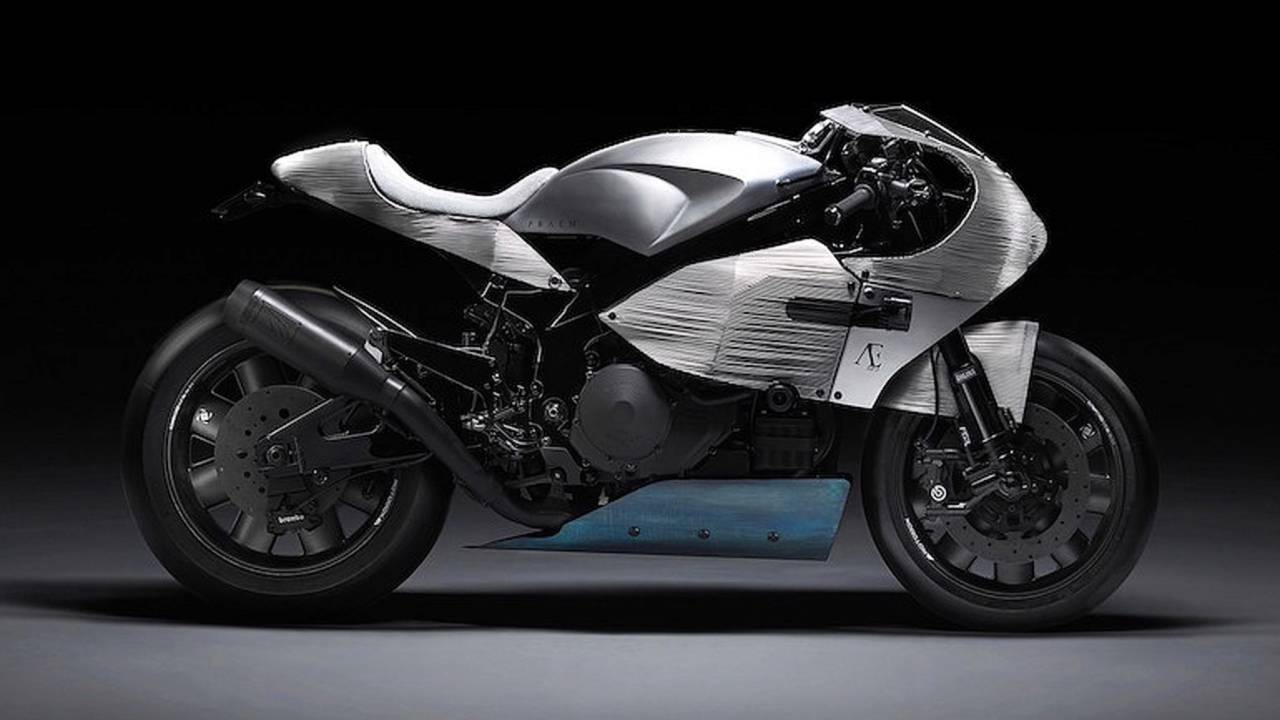 French duo take the idea of “motorcycle art” to the next level with a bespoke, wire-mesh-bodied Honda superbike.

Bike of the Week: PRAËM SP3

Full-faired sportbikes are pretty rare in the customs scene. As a whole, sportbikes don’t necessarily lend themselves to wild customization the way standards or nakeds do. In addition, the plastics adorning them often hide unsightly wiring and electronic bits that can make for quite the headache over the course of a build. That didn't stop the Berneron brothers of Paris, France, from trying though. This week's Bike of the Week is a custom RC51 built by PRAËM that really must be seen to be believed.

Sylvain and Florent Berneron’s PRAËM is a recent addition to the elite customs world. Although the company first appeared in 2014,the two are far from strangers to the design and engineering industries. Florent is a former French military aeronautical mechanic, while Sylvain honed his craft working as a designer at BMW Motorrad after getting a Masters degree in design. Together the siblings turn out one-off creations that are comparable to factory prototypes. Their knack for outstanding design, top-notch build quality, and superb execution have earned them an elite status despite only having built a few bikes. It was announced recently that PRAËM’s custom BMW S1000RR was selected for the coveted cover-spot on BikeExif’s 2018 calendar.

After a rule change permitted liter-sized V-twins in the Superbike World Championship, Honda developed the liquid-cooled, 999cc, 90-degree, DOHC, V-Twin-powered RC51 (aka the VTR1000, aka the RVT1000R). Upon its release, racer Collin Edwards piloted the first generation RC51 (aka the SP1) to victory, beating out Ducati for the Championship title. After Edwards' win, Honda further refined the 133hp machine, which culminated in the debut of the fuel-injected second gen known as the SP2. The Berneron brothers felt that the SP2 jived with their building philosophy – a money’s-no-object/sky’s-the-limit/no-holds-barred approach that takes proven track weapons, bolsters appearance, ups performance, and irons out any kinks not sorted prior to leaving the factory.

The Berneron boys got the ball rolling by first getting their hands on a 2002 RC51 which was immediately stripped of its bodywork and lighting. New designs were drawn up that gave the Honda drastically different lines while still using the RC51’s solid stock geometry. After meticulously poring over the machine, the brothers concluded that there are some overheating issues resulting from the rear cylinder’s proximity to the tank – a fact a quick search on a RC51 forum confirms. They also felt that the bike's factory braking hardware and suspenders weren’t quite up to their exacting standards.

As anyone who’s spent a decent amount of time building custom bikes will tell you, the first step is to get the mechanics finished, then you can start on the cosmetic work. So that’s exactly what the brother did. The Japanese power-plant was broken down and rebuilt using titanium valves, a lightened crank, JE high-compression pistons, tuned cylinder heads, a Power Commander, a ram air intake, racing filters, and titanium headers with a stainless pipe. According to the guys at PRAËM, their RC51 now makes a cool 165hp and 92.2ft-lbs of torque.

To accommodate for the more than 20 percent increase in power, the Berneron brothers opted to outfit their elite VTR1000 with top-shelf radial CNC Brembo units with SICOM carbon ceramic disks. The suspension is made up of Öhlins units in a custom blacked-out finish – an FGR300 up front and a TTX36 monoshock in back. The Honda’s front-end is made up of various one-off CNC-machined aluminum parts, and aside from the suspension-related hardware, all nuts and bolts used throughout the build are titanium. Next a pair of ROTOBOX carbon fiber wheels were selected that weigh in at just under 15lbs for the pair. These lightweight wheels were then wrapped in Pirelli Diablo Supercorsa SC2 super bike tires.

Finally it was time for the pair to tackle the ambitious bodywork. First, a handcrafted aluminum 12-liter tank was created featuring large cut-outs specially designed to remedy the stock SP2’s rear-cylinder overheating issues. An aluminum belly-pan was added, along with various aluminum and brushed steel side-panels. The stock HRC-designed frame was slightly modified to accommodate the new bodywork, and a custom aluminum subframe was fabricated to accept the new tail-section. Other minor one-off knickknacks were fabricated such as the aluminum number-plate holder, antique brass engine spoiler, modified magnesium engine covers, and carbon fiber rear fender.

Next came the “SP3’s” wire mesh bodywork - a 600-hour endeavor that used more than 1,000 individual 2mm stainless steel rods. First, a wire tail-section was welded together and fitted with a custom Alcantara-covered saddle. Next, a wire-form front fender was created and tacked-on. The bike’s nose and primary bodywork feature steels rods of varied density to allow for airflow where desired/needed. The whole wire-sculpture theme was reportedly inspired by the exquisite work of Brooklyn-based Korean artist Seung Mo Park. A one-off Plexiglas windscreen was then created to cap off the wire-bodied fairings, and custom aluminum brackets were crafted to mount the bodywork. Recessed LED fixtures were installed underneath the wire-structure to provide lighting.

The entire project took Sylvain and Florent a collective 4,000 hours over the course of nearly a year. Luckily the duo was able to get some financial backing from high-end horologist TAG Heuer by agreeing to incorporate one of the prestigious brand’s “Monaco Calibre 11” chronograph watches into the build. This was accomplished by installing an aluminum watch carrier on top of the custom tank that allows the watch to be slipped in and out, wristband and all.

“In history, there’s a strong bridge between the world of watchmaking, and the nautical, aeronautical, and automobile industries. But it’s somehow never happened with motorcycles,” explains Sylvain.

The brothers classify the involved build as a “grand tourer”, comparing it to a two-wheeled version of the Aston Martin DB9.

“(It’s) fast and powerful, but also timeless and elegant,” said Sylvain. “The goal was not to make a pure race bike or a comfortable touring bike, but a vehicle that can live in-between these two worlds.”

In total, PRAËM’s SP3 weighs in at just under 400lbs (technically 396lbs) dry, a full 60lbs lighter than the stock RC51 SP2. Despite its improved performance and “grand tourer” classification, the likelihood is that this bike probably won’t ever be ridden. A few months after the completion of this finely built custom, it went up on the auction block at a Bonhams event at the Grand Palais in Paris where it was evaluated to have an estimated value of $120-180K.

There are so many minor details that separate this build from the vast majority of custom two-wheelers. The Berneron brothers' skill and experience are on full-display with the SP3, proving that quality really does win out over quantity in the customs world. While other world-class customs shops have created equally artistic one-off motorcycles, I have yet to see one that also focuses this largely on the build’s performance too. Much like El Solitario’s “IMPOSTOR” BMW R nineT – which also sported full wire-form bodywork – I imagine the SP3 elicits a love-it-or-hate-it response from most people. But, even if you’re on the "hate-it” end of the spectrum, it’s hard to deny the expert design and craftsmanship that went into this impressive custom RC51.

Do you know of a bike you think deserve’s to be RideApart’s next Bike of the Week? Drop us a line at info@rideapart.com.