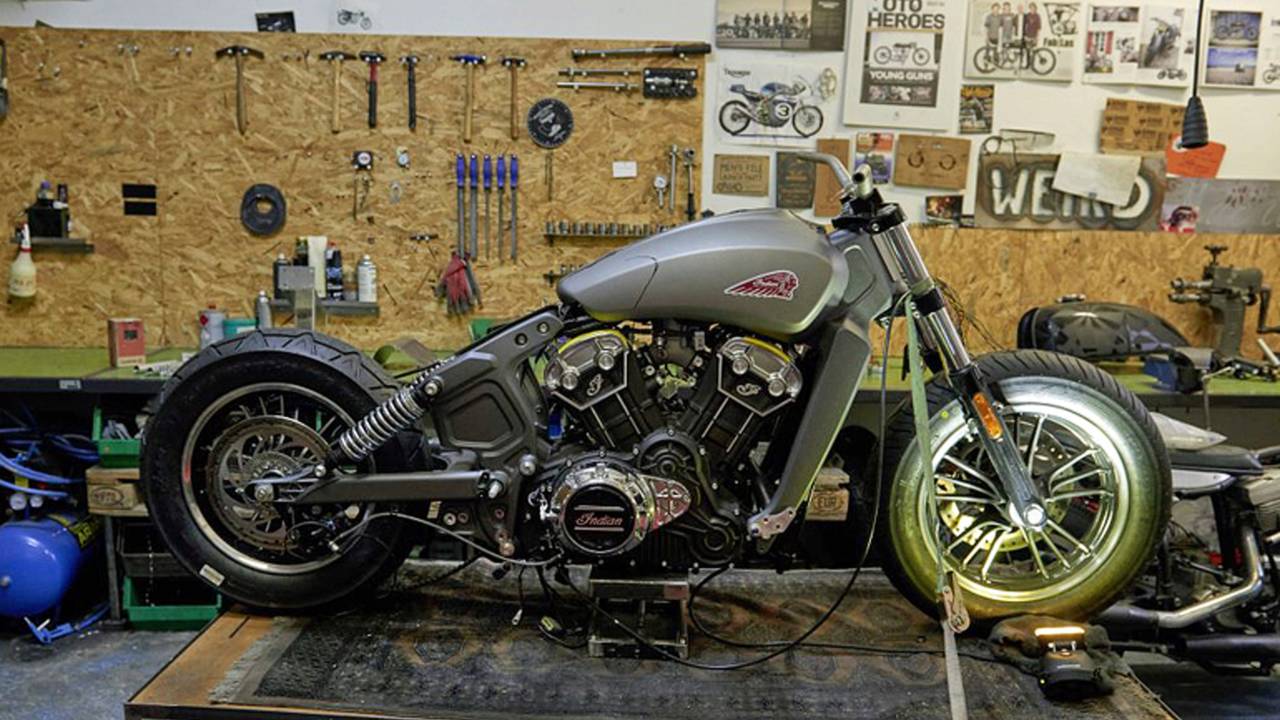 Young Guns Speed Shop has been working hard on their Indian Scout. Here's a quick progress report from Indian.

The Young Guns of Switzerland (Nik Heer and Fabian Witzig) are making steady progress on their Indian Scout custom/racing project. The duo has attracted support from Ohlins, Brembo, motogadget, Akrapovič, LSL Motorcycle Parts and the Wizard of Nos. “We are now working towards making a snarling sprint machine,” Nik said. “It will be very contemporary.” Over the past month they have resized the fuel tank and put the battery and electrics below it. The new tank becomes a cover for the electrics, while two new tanks with a fuel pump will reside under the seat.

“We took off the fuel tank, cut it down smaller and welded it back together,” said Nik. “We made it smaller mainly so we can grip the tank more easily with our legs while racing, but also because we wanted to relocate all of the electrics and add a lighter battery directly underneath it.”

The next steps involve removing the Scout’s standard radiator and replacing it with two separate units that will be half the size of the original. “Changing the radiator will mean you will be able to see more of that V-twin engine from the front,” Nik explains. “We’re making very big steps with this build and we think that in another four weeks we will be able to do our first test ride, which will see us on schedule to show the bike at the Art & Wheels show in May.”

Nik and Fabian attended their local SWISS-MOTO motorcycle show earlier this month. While Fabian scoured the show for inspiration and parts, Nik accepted the keys to a second Indian Scout that’s A2 license friendly so that he can take his motorcycle test. “I have been riding since I was a kid,” says Nik. “So I don’t think I will need to take many lessons to pass. And then as well as having the Young Guns Scout project to race this summer, we now also have this red Indian Scout to ride around on local roads.”