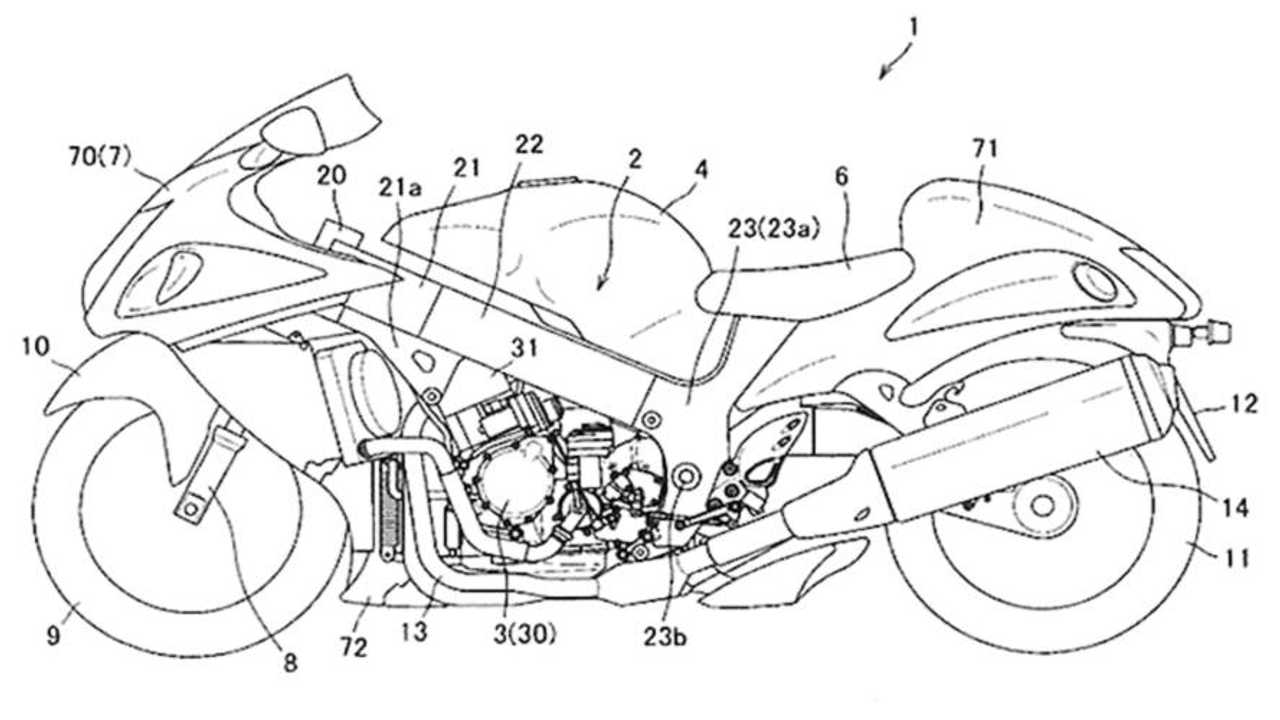 If you want to ride a 194 horse power motorcycle and don’t want to learn how to use one of those pesky clutches, than Suzuki has got the bike for you.

Suzuki recently filed a trio of patents for a semi-automatic transmission that may have been developed for the upcoming, updated Hayabusa. Hideaki Takahashi—who has in the past filed patents for Suzuki transmissions—was credited for the three patents, one of which was filed in the US, another in Germany, and the last one in Suzuki’s native Japan. Instead of just regurgitating other modern, semi-auto-moto offerings, Takahashi’s patents reveal a pretty nifty new semi-automatic setup that mimics the new bike’s traditionally manually-shifted brethren.

BRO!: Details on the 20th anniversary Hayabusa model for 2019

Takahashi’s new patents show what is called an "automated manual transmission", or AMT, where the clutchless two-wheeler is shifted via a traditional left foot-pedal. Doing this relays a signal to the machine’s ECU, telling it to initiate a gear change. Honda already offers at least one model (Africa Twin DCT) that offers a semi-automatic transmission that can be “shifted” via a pedal, but unlike the Honda, Suzuki’s new shift-by-wire system sports what the patent describes as a “clicking mechanism”, replicating the tactile sensation of changing gears on a traditional manual gear shift.

The filings show a system in which the clutch actuator is positioned just behind the crankcase, with the shift-actuator resting just above it. The semi-auto system also boasts small cylindrical elements labeled as little motors regulated via the bike’s ECU. Honda’s DCT system reportedly adds about 20 extra pounds to the bike’s weight, so we can assume the Suzuki AMT system, though seemingly more compact, will add a few extra pounds to the ‘Busa, a bike that already weighs in at 586.5 pounds (wet) in its current form.

If the rumors are true, the semi-automatic Hayabusa—which Suzuki should totally call the Autobusa, by the way—will reportedly be powered by a 1,440cc inline-four, clearly taking aim at Kawasaki’s ZX-14R. Speaking of competing with Kawasaki, there are also rumors swirling around that Suzuki plans on using the turbo technology it previously filed patents for on its new ‘Busa, which would mean squarely taking aim at Team Green’s new H2 SX.

CHECK IT OUT BRO: A look at things in the future that will suck

I’ll admit this does sound a little far-fetched, especially considering the the current model already makes a claimed 194 horsepower and the updated version will supposedly have an engine that is more than seven percent larger. Having said that, the current Hayabusa isn’t Euro4 compliant and fitting the machine with a turbocharger is one way to affordably increase power while lowering emissions.

Whenever discussing patents it is important to keep a few things in mind. First off, filing a patent in no way ensures a product will ever see production. Second, often patent drawings are done to simply convey a purpose or function and don’t necessarily represent the industrial design, specific model, or even intended application of the product. Also, the filing of a patent gives zero indication as to when a product will actually see production, and again, that’s if it sees production in the first place. This technology could just as likely end up on some other Suzuki product that doesn't even exist yet.

We don't really know exactly who this semi-auto Hayabusa is made for. Often some of the advantages given for selecting a bike with an automatic transmission are they make for good learner machines or commuters, but it's pretty clear these don't apply to a Hayabusa—semi-automatic or otherwise. We’re not 100 percent sure what Suzuki has in store for the new sport-touring heavyweight, or if it’s ever going to do anything with that turbocharged Recursion Concept, but once we hear something we’ll be sure to let you know.