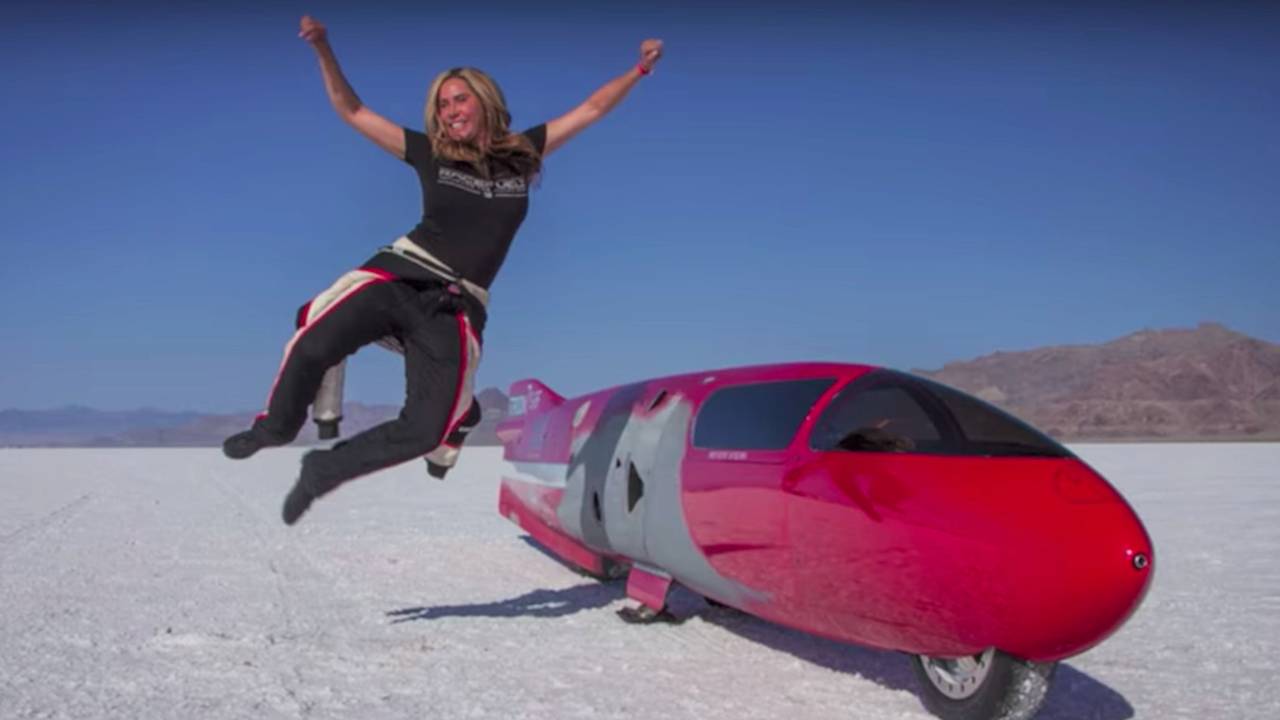 Valerie Thompson and the rest of Team “7” travel to Australia to take aim at the current 376mph world in hopes of becoming the fastest human on two-wheels.

Having clocked a top-speed of 304.263 miles-per-hour in 2016, Valerie Thompson—AKA “America’s Queen of Speed—is already the planet’s fastest female motorcycle racer. She's clearly not content with that title though, because next week Thompson and the rest of the Team “7” crew will travel 8,500 miles from Scottsdale, Arizona, to Southern Australia in hopes of achieving a new world-record for the fastest human on two-wheels. The current record stands at 376 miles per hour, and according to Team “7”, less than 10 mph stands between the team's current best entry and a new world-record, but it’s always the last couple of miles per hour that are the hardest to squeeze out of an engine.

Thompson, an ex-banker who had a drastic change of direction in careers, will be competing in the World Speed Trials at the 28th Annual Speed Week— a new motorcycle-only event regulated by the Federation Internationale de Motocyclisme (better known as the FIM) and the AMA. The event is scheduled for March 17-19, 2018 at Lake Gairdner salt flats in Southern Australia. Thompson and her team will utilize the days leading up to the Trials during Speed Week to iron out any kinks, hoping the actual record will be set on March 18, 2018. Interestingly Thompson and Team “7”’s efforts will be documented by P-51 Pictures and MN8 Films who plan to release a feature-length documentary in 2019 about the world-record attempt under the (working) title: Rockets and Titans.

THE NEW BONNEVILLE: Bolivia, the next landspeed record stage

For the upcoming record attempt, the seven-time land-speed-record holder (and fastest female motorcycle rider on Earth) will pilot a streamliner known as “BUB 7”—a 500 horsepower, 3,000cc, four-valve, turbocharged V4 engine in a 21-foot carbon fiber monocoque, designed by team manager Denis Manning. The 1,600-pound streamliner has been thoroughly developed and finely tuned, achieving a slippery drag coefficient of 0.08 thanks to wind-tunnel testing done in North Carolina—something vital to achieving half the speed of sound on two-wheels.

At this point, it’s seemingly just a matter of whether or not the stars will align for Thompson and the rest of the team. We’ll be sure to let you now what happens next week, but here at RideApart we’ll rooting for Valerie. When local media in Arizona asked Thompson what she anticipated, she responded honestly, saying, “I don’t know because I’ve never been that fast. I’m just hoping it goes well.”

Below is a cockpit camera recording of Thompson's 2016 world-record run at Bonneville.