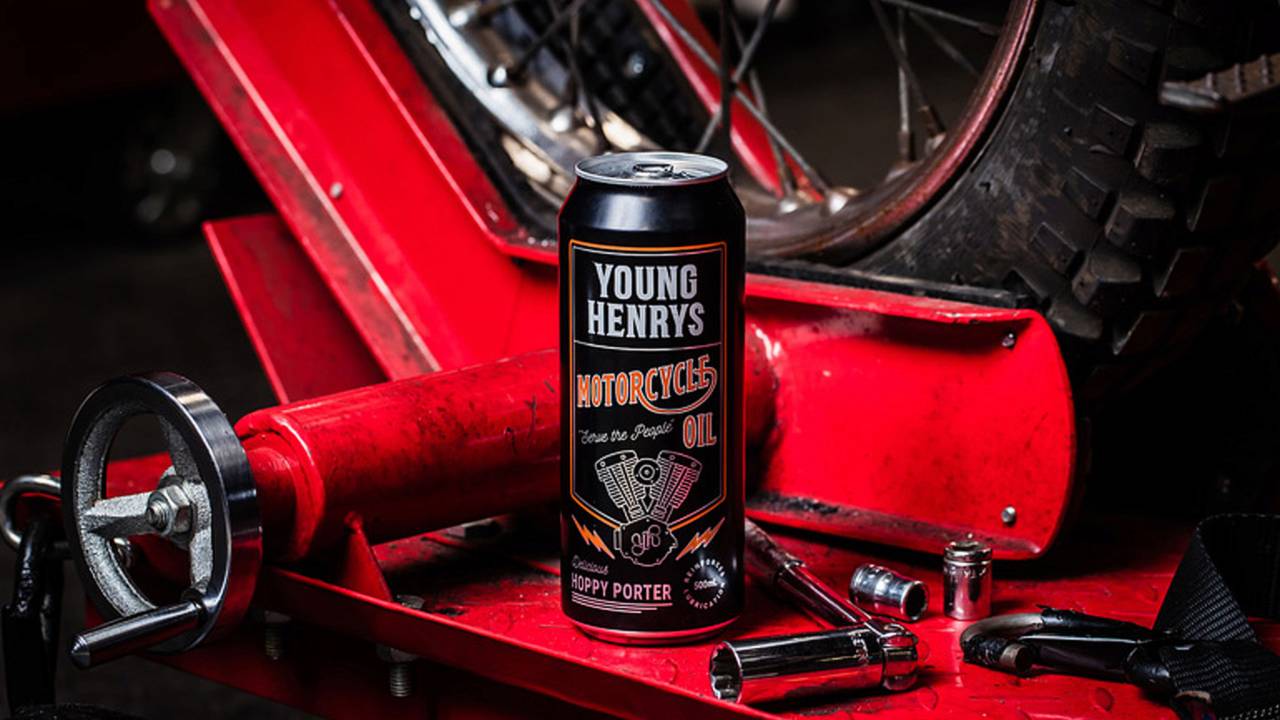 The Australians probably have as many words for beer (and drinking) as the Inuit have for snow. For example, if you're Down Under you can stroll into the bottle shop, grab a couple of slabs, then rage all day smashing tinnies with your mates 'til you chunder (got all that?) With this rich tapestry of drinking vernacular, It's no surprise that Oz has a decent craft brewing scene. One of the country's best loved breweries just turned out a limited-edition porter that's just the thing for a day spent wrenching in the garage—Motorcycle Oil Hoppy Porter.

AMERICAN BEER IS: Taking Hipster to 11: Gin Made with Harley-Davidson Parts

Young Henrys was founded back in 2012 in Newtown, New South Wales, by Richard Adamson and Oscar McMahon. Located a stone's throw from downtown Sydney, the little brewery grew quickly and gained itself a reputation for great brews and community involvement. Along with the typical craft beers you'd find in any other hip drinking establishment, Young Henrys also makes a handful of limited-edition brews for close friends or special occasions. For example, they just collaborated with the Foo Fighters to create Foo Town Lager to celebrate the band's ninth studio album.

Thicker than 30-weight and twice as tasty.

Now, I told you all that so I could tell you about Motorcycle Oil Hoppy Porter. Based loosely on a hopped-up American-style porter, Motorcycle Oil was first brewed as a small batch back in 2017 in collaboration with local pals Rising Sun Workshop. It was so popular that Adamson and McMahon brought it back for this year's seasonal winter tap (it's getting on winter in Oz, remember?).

Motorcycle Oil Hoppy Porter's malt is made from a mix of Weyerman Munich 1 and Carafa, Pale, Light Crystal, Rolled Oats and Bairds Roast Barley.  For hops, the Young Henrys crew used US Warrior, Centennial, Cascade and Citra, and Aus Cascade. It's brewed slow and careful, has a deep brown color, (apparently) a smooth, kinda bitter flavor, and a respectable 5.5 percent ABV. Since sharing is caring, Rising Sun uses the beer in a dish they call Black Ramen, and chef Andy Bowdy uses it in a porter cake at his nearby pastry shop.

IN A CANOE: Motorcycle Safety in Australia Circa 1959

Sadly for us colonials, Motorcycle Oil Hoppy Porter is only available in and around Sydney, NSW for a limited time. That said, if you happen to be traveling over there, or you're an Australian yourself, make sure you grab yourself some. Oh, and grab me some too.