Miriam Berger Laisure has been riding motorcycles for the last 70 years, owning a number of iconic bikes, and clocking thousands of miles

As many used bike ads will attest, getting older is a reason that most motorcyclists find themselves riding less if not hanging up their (proverbial) leathers for good. That isn’t the case for 91-year-old Miriam Berger Laisure who, despite her age, still rides a motorcycle. Making matters even more noteworthy are the facts Laisure doesn’t ride some little scooter, she does long distance touring on a huge 2003 Honda Gold Wing that’s been turned into a trike.

Laisure grew up on a farm in Indiana with a father that happened to be a motorcycle enthusiast. When she was 20, Laisure and her dad reportedly went halves on a 1947 Matchless. When Laisure was 23 she married a single father of three who also happened to be a motorcycle enthusiast. After their wedding the couple built a house and started a cattle farm on a property in Churubusco, Indiana, where Laisure resides to this day. Together, the two frequently vacationed, going on road trips around the country on motorcycles, or in their 32 foot, Class A, Georgie Boy Pursuit RV.

Laisure held down a couple different jobs after finishing high school, but eventually she got a position at Magnavox as a forklift operator where she was employed for more than 40. Since retiring, Laisure has spent the majority of her years extensively traveling in and around the US—hitting 47 of the 48 states in the continental US. In ’98 Laisure’s husband passed away, but she continued trekking around America in her RV or on a motorcycle with friends, which Laisure has unsurprisingly made quite a few of over her years of traveling. 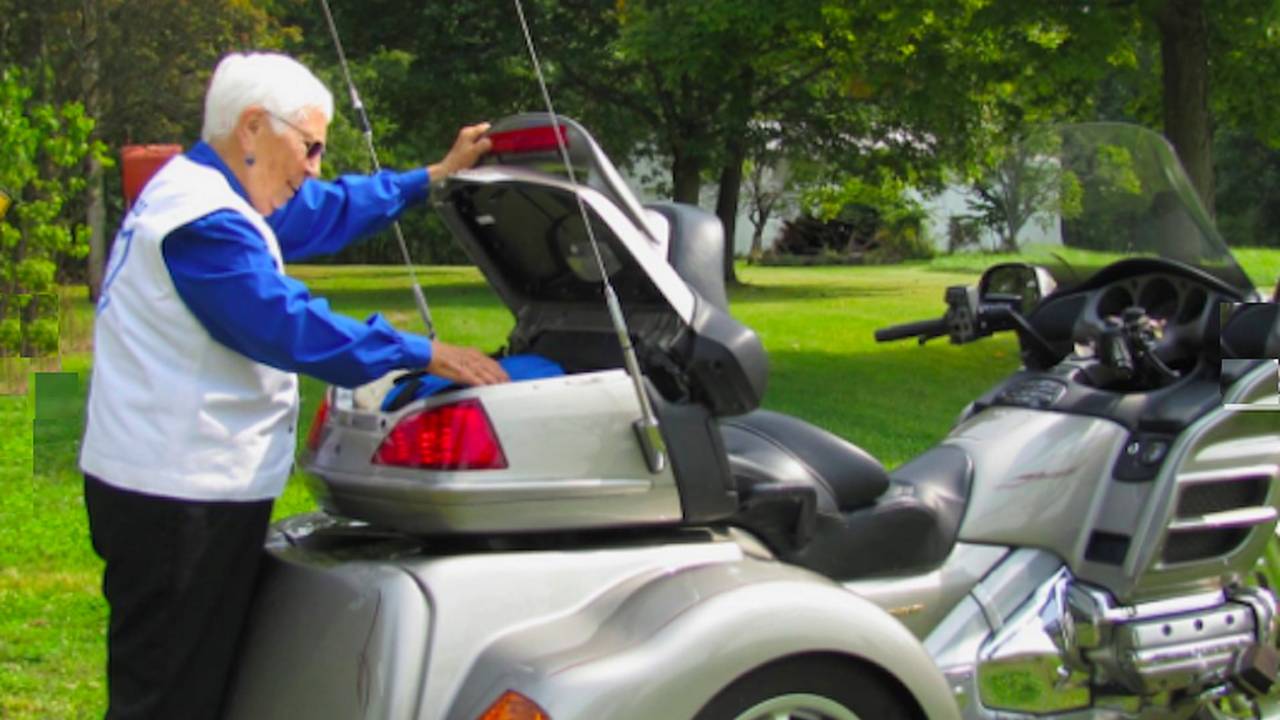 Laisure is a member of the Red Hat Society of Kendallville, the Fort Wayne Street Rod Association, and for 65 out of the organization’s 76 year existence, Laisure has been a member of the national Motor Maids Inc. On July 1, 2018 Laisure will turn 92—an occasion she’s celebrating by riding her three-wheeled Honda to Alabama to attend the Motor Maids’ convention.

Over her more than seven decade long riding career, Laisure’s stable has included an Indian single, a ’57 Triumph, a ’63 Honda Dream, a ’67 BMW, a ’78 Honda GL1000 Gold Wing, an ’83 Honda Silver Wing, an ’83 Honda Gold Wing trike, and her current mount; a 2003 Gold Wing that Laisure had converted into a trike when she was in her late 70s. That trike is the machine Laisure rides to this very day, and is a machine the woman aspires to put a lot more miles on before she’s done with it.