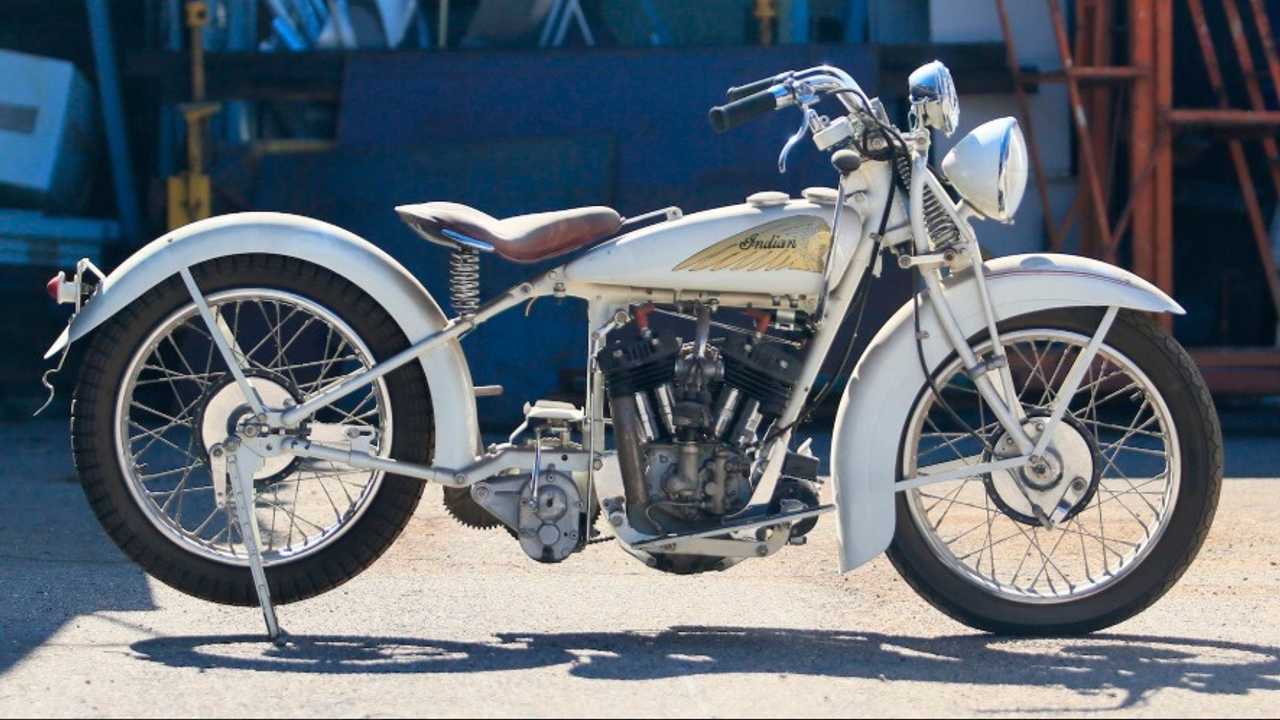 The big day came and went, and Rickey Jensen's bonkers Indian collection brought in more than $500,000 at Mecum's Las Vegas Motorcycle Auction. Not bad for a collection of bikes and tchotchkes that no one knew existed until a couple weeks ago, eh?

The other bikes did well, too, bringing in between $20,000 and $50,000 each. Even the bicycles went for hundreds or thousands of dollars. My favorite thing in the auction, the '47 Papoose, went for a measly $1,100. I wish I'd known, 'cause that's something I actually could have afforded and now I'd have a papoose!

If you'd like to see the rest of the auction results, and maybe see if you can pick up something that didn't sell, check out the auction site here.

Rickey Jensen was the owner of RJ and C Metal Fabricators in Phoenix, Arizona. He was a quiet and private man who reportedly mostly kept to himself. He had an extensive collection of scrap metal and other junkyard items, but in the business of welding and fabricating, that collection is simply stock. Some apparently may have observed the man to be “a bit of a hoarder” which, given the historic discovery, seems like just a slight understatement.

After Jensen’s death, his padlocked barn revealed not more scrap metal, but a hidden treasure. Fifteen vintage Indian motorcycles, among which is, your eyes do not deceive you, an Indian Papoose. Manufactured in the UK as the Welbike and rebadged by a struggling Indian, it was developed for wartime use as a paratrooper scooter! There are also eight Indian-branded bicycles and hundreds of pieces of Indian-branded memorabilia items (the auction house refers to these things as “road art”) on offer. Signs, screwdrivers, spark plugs, belt buckles, letter openers—all bearing the Indian motorcycle brand—show an extreme level of dedication to this marque and a constant vigilance in hunting them all down that must have spanned decades.

Unfortunately, not much is known about the dedicated collector today; we regret that the recluse died without talking about his collection, and, apparently without showing it to more than one or two people in his lifetime. He was obviously dedicated to the brand, however, and this week his collection is up for auction in Las Vegas. Each piece is offered there with no reserve, and happily, it has all been cataloged so we can drool over the pictures and wonder at this man’s passion. The surprising part of the find, and the collection, is that he accomplished it almost entirely in secret.

This remarkable collection spans the original Indian marque’s life, from inception until the day it was no longer a viable business (its subsequent resurrections notwithstanding). There is speculation that this collection is so rare, it might be the only one of its kind in the world.

The actual literal barn-find collection is out of the dark and squinting under the bright lights of Las Vegas this week, on the auction block at Mecum’s 28th annual vintage and antique motorcycle auction in Las Vegas, until January 26th, 2019. The “road art” has all been for sale since Tuesday, and the motorcycles and bicycles will be on the block on Thursday, January 24th. Remember, there is no reserve, so you have a chance to own a piece of this remarkable history.