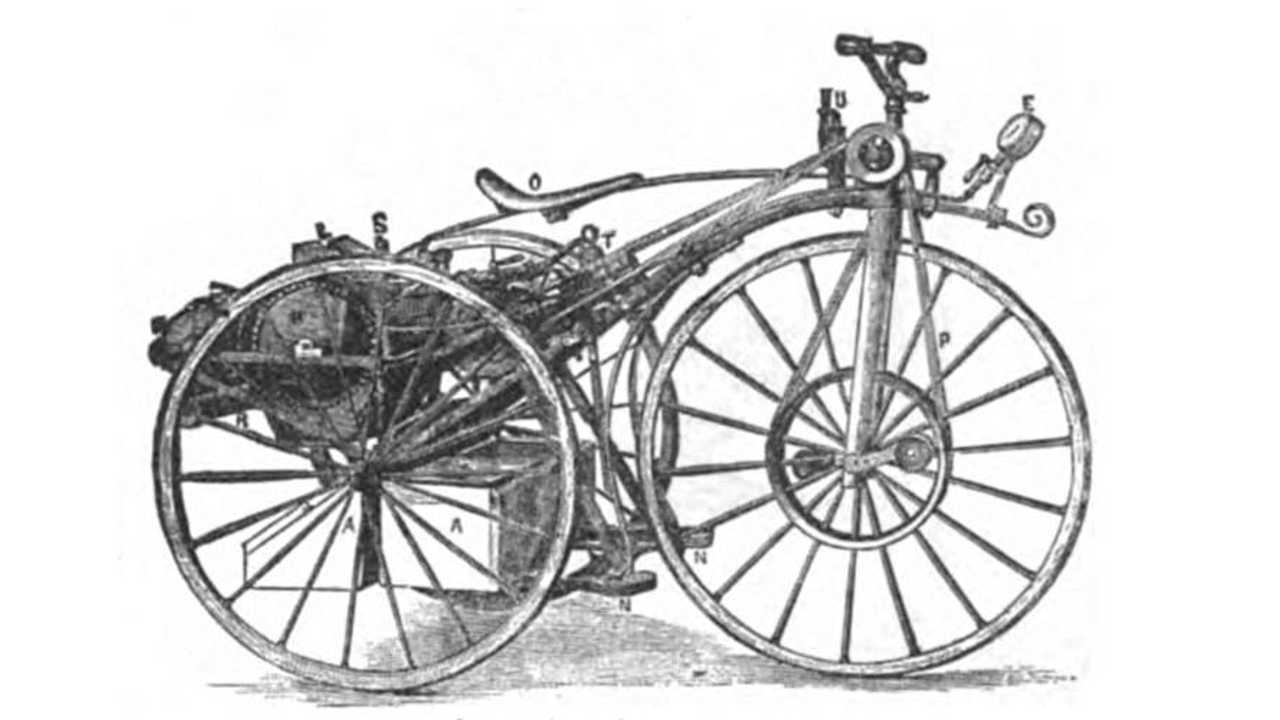 A faithful reader reached out to ask us about the very first motorcycle ever built and we fell down the motorcycle history rabbit hole.

What is the first motorcycle ever built and who built it?

Hey Ibrahim, thanks for writing in! So, man, the first motorcycle? Ever? That's a tricky question. See, during the industrial revolution there was a ton of experimentation going on with steam power, internal combustion, electricity, and all kinds of new-fangled technology. While some of that experimentation was done by cool, collected academics in controlled environments, most of it was done by wild-eyed madmen like Karl Benz, Henry Ford, and Isambard Kingdom Brunel (the man with the best name in history). These experiments and the machines they gave rise to were created in sheds and workshops all around the world, and as soon as they came to life they were often just as quickly destroyed or scavenged for parts for the next invention. This means that, to be honest, no one really knows what the very first motorcycle was or who invented it. That said, we can make an educated guess.

YOU GOT QUESTIONS: Ask RideApart: Hills and Earthquakes

I'm sure you'll be shocked, shocked, to discover that there are a bunch of answers to this question and they're all correct. Maddening, right? Some sources say a Frenchman named Ernest Michaux—son of blacksmith and inventor Pierre Michaux—invented the first motorcycle when he stuck one of Louis-Guillaume Perreax's steam engines on a bicycle produced by his family's business and called it the Michaux-Perreaux steam velocipede. Fancy name, eh? This was done somewhere between 1867 and 1871, the years are vague.

A surviving Michaux-Perreaux Steam Velocipede at the Guggenheim Museum's 1998 Art of the Motorcycle exhibit.

Other sources claim that a guy named Sylvester Roper from Boston, Massachusetts, made the first motorcycle when he—much like Mssr. Michaux—stuck a steam engine on a bicycle. Roper sold his Roper Steam Velocipede from the late 1860s until his death in 1896. That's a story all in itself. Roper was exhibiting his second-generation steam velocipede at the Charles River Bicycle Track in Cambridge, Massachusets on June 1, 1896. During the exhibition—in which he raced and beat the pants off of professional bicycle racer Tom Butler—Roper apparently had a heart attack at 40 miles per hour and crashed. He was 72 years old and died doing something he loved. That's gotta count for something, right?

WE GOT: Ask Rideapart: I'm Pregnant! What Do I Do With My Bike?

An illustration of the first generation Roper Steam Velocipede.

Last, but certainly not least, is the Diamler Petroleum Reitwagen. Built by historical power couple Gottleib Daimler and William Maybach in 1885, the Reitwagen was—again, according to historical sources—the first gas-powered, commercially produced motorcycle. It was made out of wood, had wood wheels with iron hoop tires like an old-timey wagon, a single rear brake, and an uncomfortable-looking saddle. It was powered by a 264cc, air-cooled, four-stroke single which was mated to a single-speed belt drive which passed for a transmission. It was a revolution in motorcycle design and almost certainly gave rise to the motorcycle fad of the late 19th and early 20th centuries.

A replica of the Diamler Reitwagen from the Mercedes-Benz museum.

Now, those three are all considered the "first" motorcycle, but there's an additional wrinkle. Depending on who you talk to, the steam-powered ones don't count as motorcycles. Some academics believe that the only true motorcycle is the petrol-powered one and that eliminates Roper and the Frenchmen. Hogwash. We reckon that as long as it had two wheels and some kind of powerplant that wasn't the rider's leg muscles, it was a motorcycle. Don't listen to that anti-steam propaganda.

ANSWERS: Ask RideApart: How to Ride in the Rain

So there you have it. The answer to your question is, "Who knows?" It could have been any of those three or some machine built by an anonymous tinkerer in Moravia or something that never saw the light of day. Does it matter? At the end of the day, not really. A million weirdos in a million workshops tinkered away for years and eventually, by their genius and perseverance, ensured that you and I can ride at our leisure today.