HomeFeaturesRiding On the Wrong Side

Ask RideApart: How to Ride in the Rain 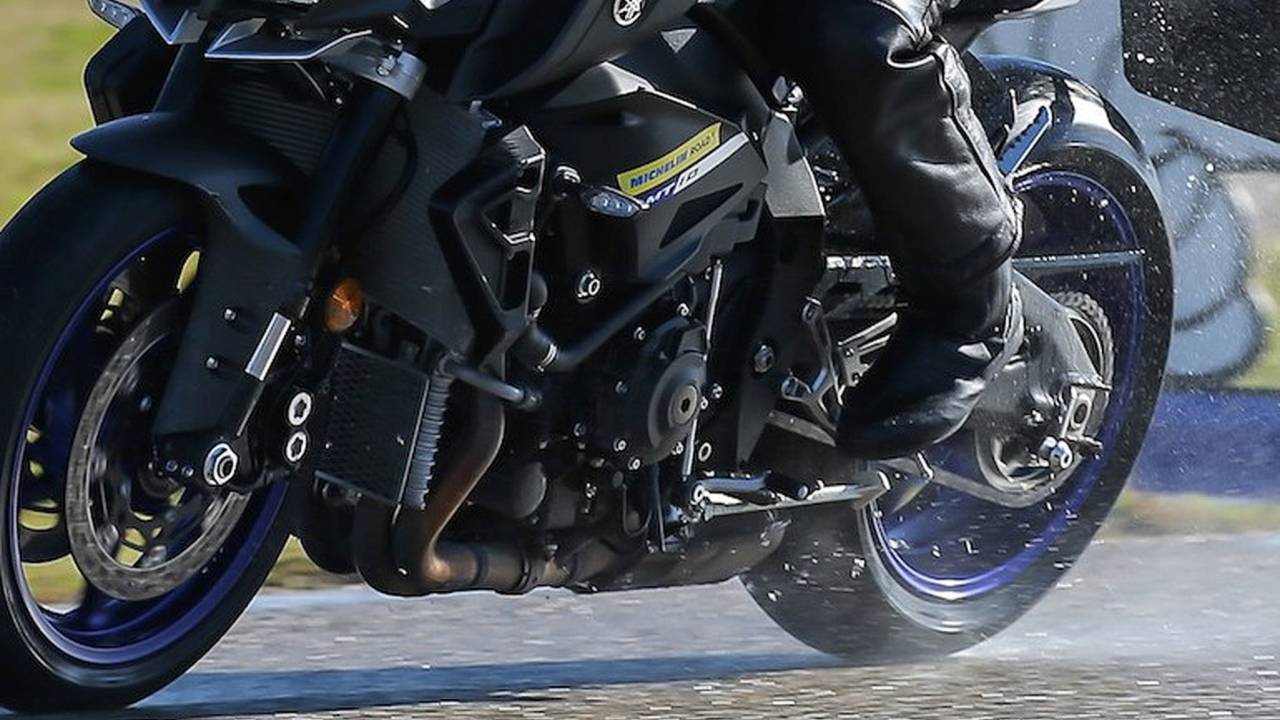 Twelve years of riding a motorcycle in the United Kingdom has taught me a thing or two about wet-weather riding, so let me tell you all about it.

Don't let a little sprinkle keep you off the road, hit those soggy twisties like a pro

You might be aware that I live in the United Britain of Great Kingdom—or something like that—and if there's one thing everyone knows about Britain it's that it is generally wet. As a result, the folks over here are unintentional experts when it comes to riding in the rain. I’m pushing 12 years of residency and I ride year-round, so I thought I’d share a few tips I’ve picked up along the way.

WHERE THE: Ask RideApart: How Hard is it to Ride a Motorcycle?

It Starts With Good Tires

Tires aren’t terribly sexy things to talk about, and on sunny days most road riders pay little or no attention to the spinning bits of rubber beneath them. It turns out those rubber bits are more than just rubber though. They are complicated things made up of various compounds that—along with tread pattern—are tweaked by tire companies depending on desired performance.

Unless you have a very specific desired performance (eg, exclusively off road, or racing track), my advice is to seek out tires that offer good wet weather handling. I’m partial to the Michelin Road series—almost always throwing Pilot Road 4s on my bike and eagerly looking forward to this summer when the new Road 5 will be available in sizes that fit a Triumph Tiger Explorer—but, truth is, you’ll find decent tires from a number of manufacturers like Pirelli, Bridgestone, Metzeler, and Avon.

Unfortunately, the type of bike you ride will affect the type of tires to which you have access. Longtime readers may know my greatest complaint about cruisers and heavy tourers is the fact they tend not to have very good tire options. This is because the traditional cruiser rider is an American who only rides on sunny days and cares more about longevity than wet weather performance. This is changing as Harley and Indian focus more and more attention on the European market, but it may still be a while before the options are as good as with other street bikes.

No matter what bike you ride, my personal rule of thumb is that you should opt for the best wet weather tires you can afford, even if that means sacrificing somewhat in the areas of longevity or dry weather performance.

Once you’ve got your tires ready for water from the sky, you’ll need to make sure your body is ready, too. This means investing in decent rain gear. Spending money sucks I know, but being wet on a bike sucks more. Being wet on a bike usually leads quickly to being cold on a bike, which can be downright dangerous. When you’re cold, your physical and mental abilities are diminished.

The Oxford Montreal 3.0 jacket and Montreal 2.0 pants of which I’ve become enamored recently are examples of Rain Probable gear. They're comfortable, all-day-wearable kit that can be relied upon to keep you dry if you hit patches of wet stuff between point A and point B. Really high-end kit, like my Aerostich Roadcrafter R-3, can take a hell of a lot of abuse for a reasonably long time but ultimately, it too will give in if you set out into an all-day monsoon.

For the worst of conditions, it’s best to go with the old-school Rain Definite gear. This is the ugly, plasticky stuff that goes over your normal gear—the waterproofs the old dudes had to wear before the days of Gore-Tex and the like. It isn’t breathable, it doesn’t look cool, but it definitely works. After trying stuff from Richa, Held, Weise, and Furygan, I’ve finally settled on Dainese D-Crust jacket and pants as my go-to downpour gear. I keep it rolled up in a pannier just in case, because it's good to be prepared.

Tea and Cake Are Your Friends

You’ll spot a theme running through the remaining advice in this article: slow down. Foul weather can cause us to think, “I just want to get where I’m going,” but you’re more likely to arrive in one piece if you adjust your riding mindset. In fact, you should even be open to the idea of stopping.

If you live somewhere other than the Pacific Northwest or the British Isles, it can be a good idea to hit the nearest cafe or coffee shop as soon as rain starts to fall. This is because oil and road grime will have built up on the road surface and the first bit of rainfall sees roads at their slickest—oil and water don’t mix, of course. Grab a coffee or something and give the rain 30 minutes or so to wash away the worst of it.

The roads are very rarely dry for several days in a row in Blighty, so this sort of oil buildup is less likely. The advice to seek shelter is still worth taking, especially if you’ve got a long journey planned. Even when wearing the best of gear rain has a way of wearing you down. Take the time to stop, warm up, dry off, and mentally reset.

A quick stop for a spot of tea will do you good on a rainy day.

Rain won’t wash away all oil and grime, so be on the lookout for that which remains. Do your best to avoid the telltale rainbow puddles that show up at intersections and roundabouts. Now, having said that, don’t swerve erratically to avoid them. If you didn’t spot an oil patch in enough time to have moved away in a controlled manner, don’t panic and definitely don’t hit the brakes: just ride through it as upright and steady as possible.

I often use the off-road puddle-splashing technique of pulling in the clutch to ensure I don’t put too much power to the wheel. This may be overkill however; I’m sure most people would tell you that all you need to do is maintain calm, steady throttle.

The same applies for the dreaded manhole covers, bridge expansion joints, railroad tracks, road markings, crosswalks, and other hazards that get slick when moisture is added. Avoid them when you can, ride over them calmly when you can’t.

Sometimes rain isn't the worst thing on the road on a wet day.

Some day, I may write an article about why it’s a good idea to take an off-road riding course even though I generally don’t give a damn about riding off road. One of the things I’d mention in that article is that doing a bit of off road work helps develop techniques for dealing with less-than-perfect surfaces.

One of the very first things you learn in such courses is the importance of moving your body around to help ensure weight is in the right place. More often than not, “the right place” is low to the ground, or as close to it as you can get. This can be as simple as lowering your torso closer toward the tank, or getting your ADV on and putting weight onto the pegs.

However, don’t alter your style so much that it affects negatively on your riding—generally a rainstorm isn’t the best place to try new things—you simply want to remember that how and where you place your body can assist in your maneuvering the bike. Most importantly, you don’t want to be rigid or bolt upright. Nerves may make you want to tense up, but try not to let them get the better of you.

Get your body in motion, but not like a fit or a commotion.

Just as you want to keep your body fluid and natural, so too should your riding be as smooth as possible. Do your best to avoid erratic movements and sudden stops. The key to accomplishing this is looking well ahead, doing your best to anticipate challenges, and coming up with means of dealing with them. In other words, ride like a RoSPA nerd (for those of you playing along outside the UK, the Royal Society for the Prevention of Accidents—RoSPA—is one of several UK organizations that teach safe riding techniques).

The decreased visibility inherent to riding in the rain can make it difficult to scan too far ahead, so once again the advice is to slow down. Don’t ride faster than you can react. The most obvious application of this advice is to increase your following distance. Doing so actually has a double benefit: not only will it improve your chances of being able to respond to something ahead, it will also get you out of the immediate spray of the car in front of you.

Go Where the Wet Ain’t

If bikes perform better on dry surfaces it’s a no-brainer that you should seek out those surfaces. When rain isn’t actively falling, the movement of cars will start to dry out the road. Depending on a number of factors, you’ll find dry spots open up either in the tire tracks of cars, or in the middle of the lane. More often than not you’ll find that the slow lane of a multi-lane highway/motorway will dry out first because of the air being displaced by big trucks.

However, keep in mind that trucks throw a lot of spray, so don’t ride too close. Be particularly cautious when passing a big truck. The spray coming of those ginormous wheels can be downright blinding.

Riding in the wet requires you to be even more attentive than usual.

Keep Calm and Carry On

One of the biggest challenges you’ll face when riding in the rain will be the presence of other people. Even in always-squelchy Britain drivers go a little nuts when when it rains, becoming far less observant and far more unpredictable. When I lived in Southern California, rain caused people to drive as if they were trapped in their cars with a swarm of angry hornets and cocaine-addled vipers.

As a motorcyclist stuck out in the elements, you will have an overwhelming desire to communicate to these people what idiots they are. I assure you: it is a waste of time. It is also a waste of your mental energy.

By and large, the reason people drive so poorly in wet weather is that such conditions pull the driver’s perspective into the car. He or she is paying attention to the task of finding the wiper switch, or trying to figure out why the defogger isn’t working, or searching the radio for weather updates, or just focusing on the fact their shoulders hurt from tensing up so much. When you start focusing on how much these boneheads piss you off, you’re effectively doing the same thing as them—bringing yourself into your helmet, rather than focusing on the road.

Over time I have come to accept that the people around me are stressed and my best course of action is to just stay alert and not get angry when something dumb happens. Give yourself plenty of time to react to a situation, but don’t overreact.

Never let a little rain get in the way of a good ride.