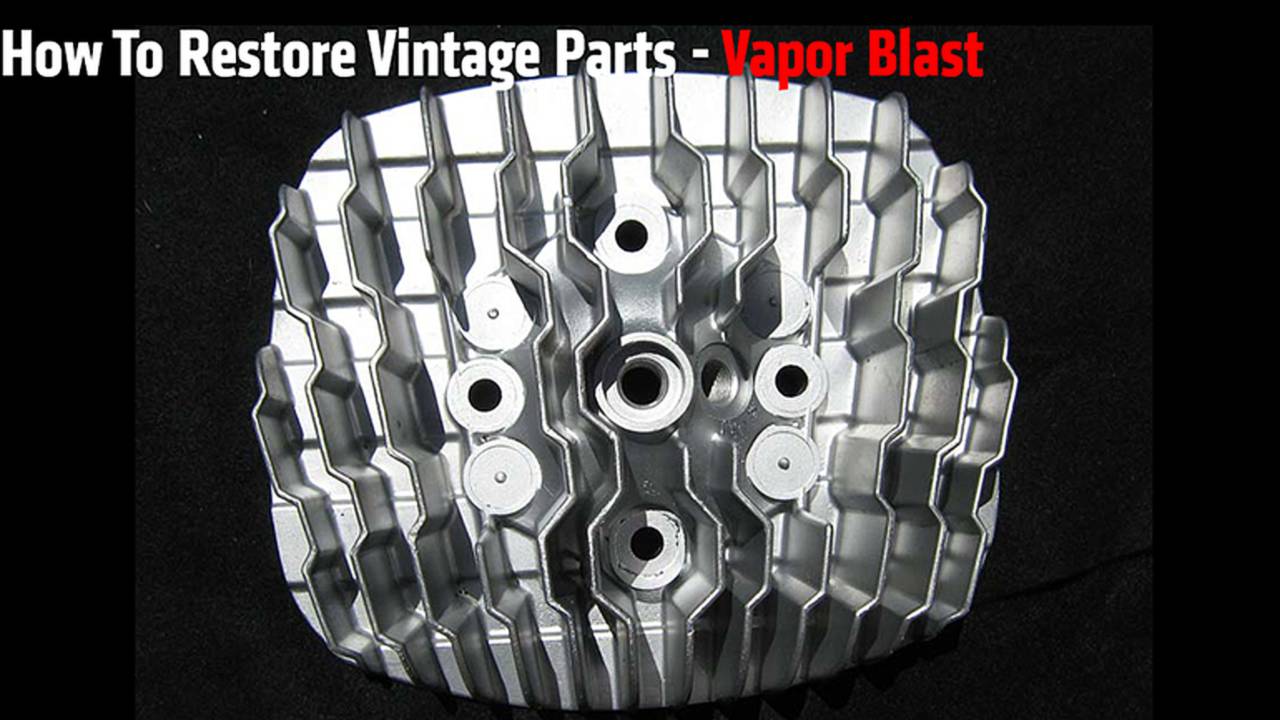 How To Restore Vintage Parts, Vapor Blast EditionAnyone can appreciate a nicely aged patina - it adds charm, it adds value - but sometimes, enough is...

Anyone can appreciate a nicely aged patina - it adds charm, it adds value - but sometimes, enough is enough. Working with a part covered in petrified road grime from '60’s or '70's is just downright disgusting to handle. We decided to see if there was a better way.

One of the biggest parts of restoring a vintage bike is cleaning it up, but chemicals like The Right Stuff

can only do so much and often harm your bike's metal surfaces.

On the other hand, methods like sand blasting are way, way, way too rough and sometimes destroy the parts.  There's nothing worse than spending some big dough and a lot of time finding the right part, only to have it destroyed.

That leaves you with few options, all of which are time consuming and super tedious. We've found another alternative. Stronger than chemical cleaners, but less aggressive on metal surfaces, Vapor Blast.

It is still widely used in the UK for bike restoration. Apparently, the Brits have even more greasy, rusting worthless junk flapping about in the muck than we do, and we're not just talking about dental work here and a lot of the worthless junk still bears the initials B.S.A.

There are a few options for making those gnarly parts look new again: The first is my personal favorite: Buy a new part, dummy. Unfortunately, that’s not always possible and, seriously, some of this vintage stuff is worth more than its weight in gold if you can even find it.

With a restoration, there are a few options:

First option is that sweet smelling toxic chemical that comes in in yellow and blue spray can. Donning an old pair of gloves, a brass wire brush and those monogrammed towels from the downstairs bathroom you begin the task. Just kidding, honey (ed. note: he's calling the Mrs. Honey, not the editorial staff, not that we would mind).

Vapor Blasting uses water, micro beads, mild cleaning agents, and air. These components are mixed into a slurry and propelled at high speed toward the surface of a metal part, cast iron, aluminum, brass, as well as mild steel. It seals the surface, resulting in cosmetic enhancement and imparts a micro finish that helps it resist further staining and oxidation.

Vapor blasting is a wet process. The water cushions the media (glass beads) impact, provides a liquid honing effect and flushes away all of the contaminates (grease, dirt, oxidation, rust, etc.). It flows and cleans in areas that dry blasting won't, like inside of carbs, ports and deep cylinder fins. The finish that vapor blasting provides is like the part was just cast.

The peening - peening! - effect provided actually seals the microscopic pores on the surface, the part will not absorb grease and dirt like a dry blasted part will. Surfaces are not affected, precision tolerances, such as bearing fits and piston size will not be changed.

The water component of the slurry provides a hydraulic cushioning effect to soften the microbeads impact on the metal's surface. Working together, they provide a gentle, and somewhat time consuming process that peens the metal surface and leaves a bright lustrous satin finish. Finishes will vary from alloy to alloy and manufacturer to manufacturer, but all are good. Aluminum castings in particular are well suited to this.

Look hard, as there are very few places in the states that offer vapor blasting as a service, but it's worth the time and money.

This is Not Soda Blasting

Soda and Sand blasting (or glass bead blasting) are both dry processes, basically throwing an abrasive material at high velocity (via compressed air) against the part being cleaned. Though soda is not as aggressive or damaging as sand, erosion from the aggressive particles can damage the part. Particles of abrasive media can get lodged in minute nooks and crannies of engine cases, and once the engine heats up, they are released in the oil (not good).

Dry media gets lodged in tapped holes and oil passage ways of engines, requiring re-tapping threaded holes and extensive flushing to remove it. Dry blasting sometimes creates a rough or porous surface which stains easily and is hard to remove. Though a recently sand or bead blasted part with a greasy finger and that stain will not come clean.

Yes, you'll need a blasting cabinet or gun. The guns are typically cheap, but the cabinets range anywhere from $100-$1,000 depending on the size and quality. If you're working on old bikes, it'll pay for itself in due time.

The company is Vapor Blast Solutions based in Santa Fe New Mexico and the guy is Dan Vitaletti. Dan is a vintage racer, builder and motorcycle restoration specialist. A moto-wizard if there ever was one and one heck of a rider too. Maicos, Greeves, Cottons, Villers, BMW’s CZ,s. The list is endless. If you’ve heard of it, he's restored it. If you haven’t heard of it, he’s probably restored that too.

All advice and opinions are welcome in the comments...