Everybody loves a good barn-find story. The best of the tales read like a juicy detective novel. There’s rumor and intrigue, hidden clues, false hope, shadowy characters, high-stakes negotiations, invariably a trying voyage, sometimes even outright danger. But work through the plot twists, stay on the hunt, mix with a little good luck and at the conclusion we have a happy, satisfying outcome. In...

Everybody loves a good barn-find story. The best of the tales read like a juicy detective novel. There’s rumor and intrigue, hidden clues, false hope, shadowy characters, high-stakes negotiations, invariably a trying voyage, sometimes even outright danger. But work through the plot twists, stay on the hunt, mix with a little good luck and at the conclusion we have a happy, satisfying outcome. In the end, barn-find stories are all about resurrection.

Here’s the story of my own favorite barn-find, a 1940 Indian Four equipped with a flathead Ford V-8:

Because I've sniffed out my share of collectible vehicles, writer Tom Cotter asked me to pen the foreword to his latest book, The Vincent in the Barn, currently one of Amazon's bestselling bike titles.

Not to belittle the efforts of the car collectors in Cotter’s previous two books, The Cobra in the Barn and The Hemi in the Barn, but they had it easy compared to unearthing hidden motorcycles. Due to its size, a sequestered car does indeed need to be stored in a barn, or a garage. Not so a two-wheeler. Not much bigger than a Schwinn, many go subterranean and end up in basements. Others ascend: A couple of healthy guys can hump a non-runner up several flights of stairs for safe keeping. Some get bricked-in behind walls for the ultimate in anti-theft. Heck, break a bike down to its basic components – motor, frame, tinware and wheels – and it can be stored in a small closet.

My Indian barn-find story came about completely by accident and turned out to be quite the quest. I was in the library one day, researching a story, when I spied an old 1954 Cycle magazine with the cover blurb “Indian V-8!” Now, Indian never made a V-8, but Bill Drabek, a lanky Texas car mechanic, certainly did. He had a 1940 Indian Four with a duff motor and, by chance, a Ford V8-60, the smaller 2,200cc version of Henry’s famous flathead. Combining the two, Drabek created an eight-cylinder Indian that spanned 9 feet fender-tip-to-fender-tip and weighed-in at almost a half-ton, some 965 pounds. Resplendent in Kelvinator white, it was said to be good for 95 mph in second gear – and there were two more gears to go in the converted Harley gearbox! 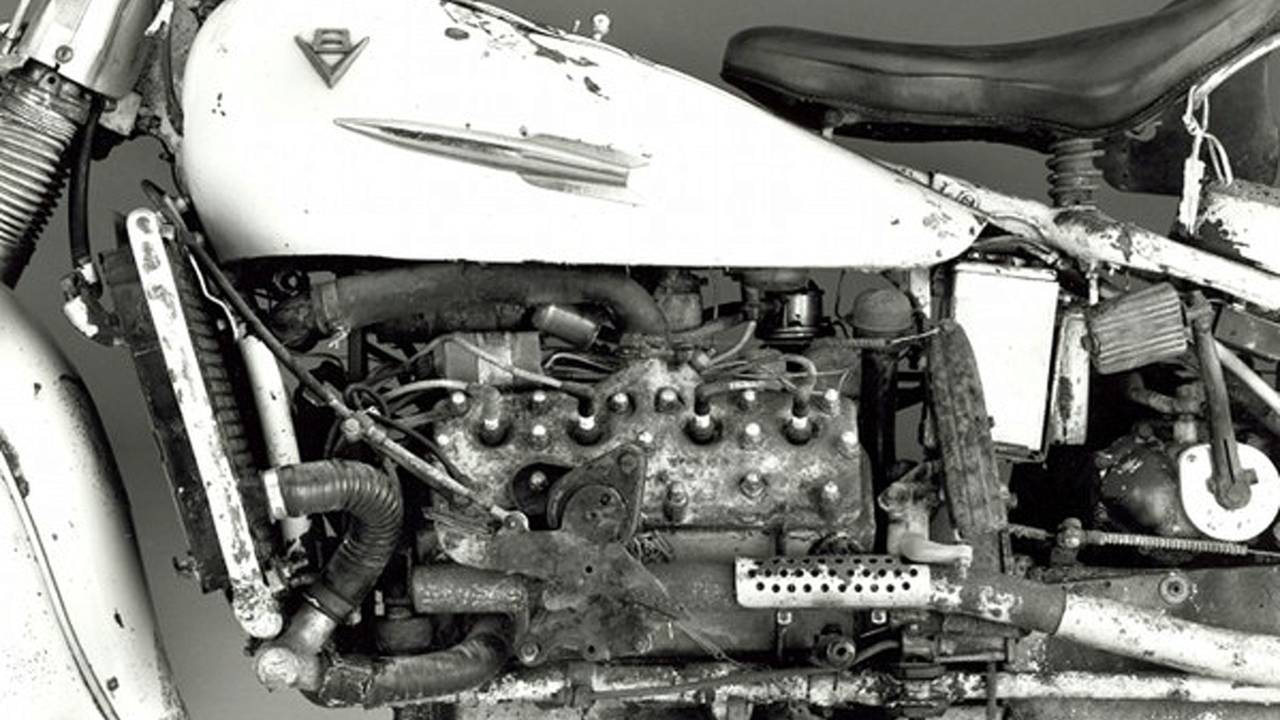 Liquid-cooled 136-cubic-inch Ford flathead was made from 1937-40, is smaller version of the 239-cube flattie favored by hot-rodders. For use in the Indian Four frame, oil pan was cut down and a smaller flywheel fitted.

Great story, I thought, I’ll contact the builder and see if he still has the bike; a follow-up should make for interesting reading. What then transpired was six months of sleuthing that involved tracking down additional stories about the bike in Mechanix Illustrated and the Ford Times, calls to old newspaper reporters and inquiries at local motorcycle shops, Frankly, it became a bit of an obsession. Now I wanted the story and the bike. 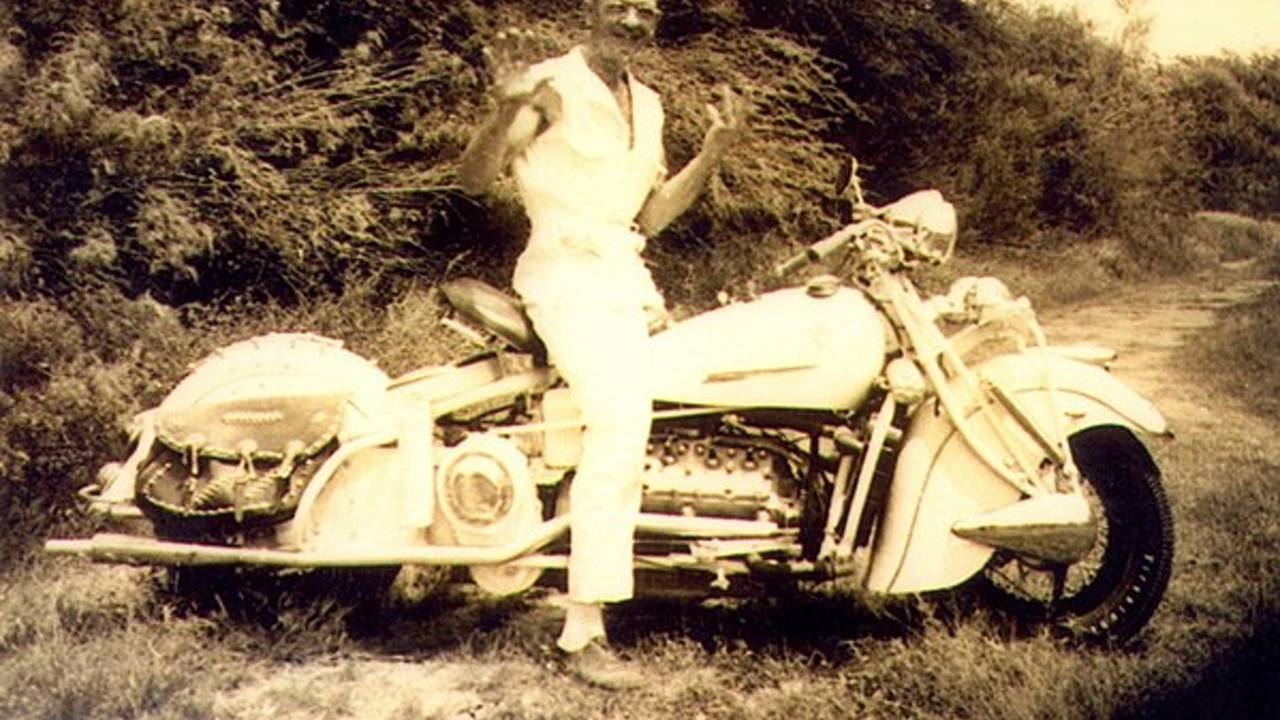 Builder Bill Drabek holds up eight fingers signifying cylinder count. He used the bike for everything from picking up mail at the Kingsville post office to highway trips into Mexico. At the time of his death, V-8 showed 41,000 miles.

Turns out Drabek had passed away in 1968, felled by a heart attack. After his death, there were several offers to buy the bike but his grief-stricken wife, Jennie, wouldn’t hear of it. The Indian V-8 was pushed into a shed, where it spent most of the next three decades, falling prey to the occasional flood, stick-toting juvenile delinquents and an extended family of rodents. In the mid-’90s, diagnosed with Alzheimer’s, Jennie was put in a home. The Drabek's property and possessions, including the big white bike, went on the auction block.

By luck one of my previous Texas contacts gave the Indian's new owner my phone number – after Jay Leno had declined interest – and soon I was winging to Corpus Christi with a U-Haul truck reservation, enough tie-downs for Moby Dick and directions to a quonset hut in the town of Kingsville. I was not leaving the Lone Star State without that bike. 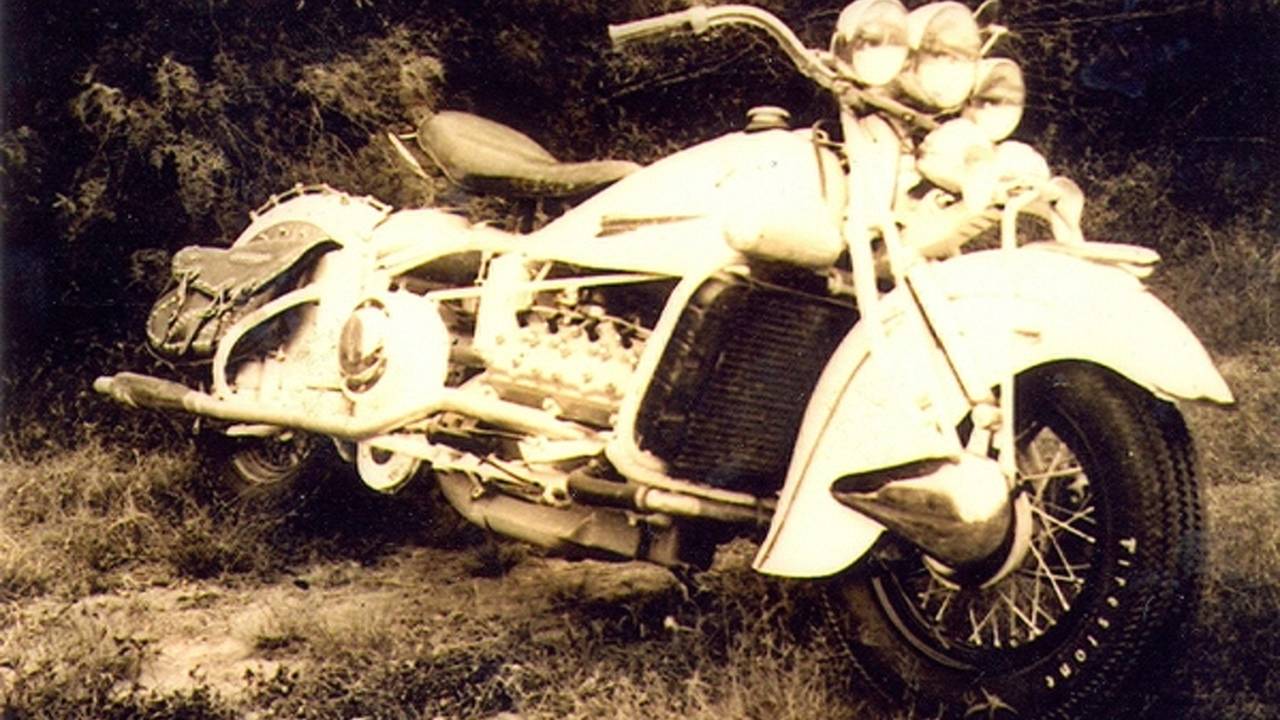 Before its restoration began and the bike was blown apart, I showed the V-8 once in its as-found state. It caught the attention of one of the world’s preeminent Indian collectors, a moneyed man with at least 60 Wigwam products in his stash. “Why don’t you let me save you a lot of time, effort and money,” he said. “Sell me the bike.” 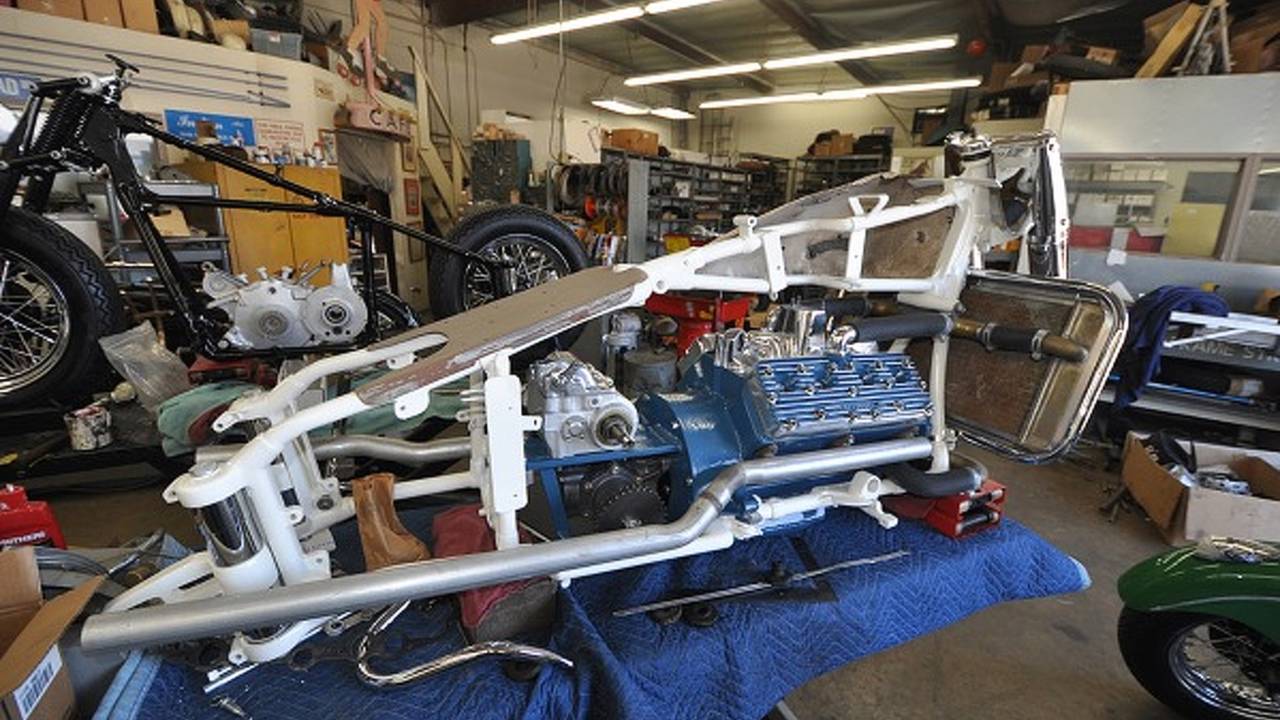 At Indian Engineering: Frame painted, engine installed, tinware being mocked up. Gray component behind bellhousing is the 90-degree power take-off; it connects to the Harley clutch/gearbox above via duplex chain. Rebuilt V8-60 topped with polished intake and vintage 17-stud Edelbrock heads, upgrades ol' Bill would no doubt approve of.

Of course I said no, though in retrospect accepting his offer would have been the smart thing to do. Thirteen years and let's-not-talk-about-the-money later, the V-8 is finally going back together. Why the century-spanning restoration? The aforementioned fundage issue, for one. Related to that, my friend John Bivens, one of the country's best Indian restorers, has taken on the V-8 as sort of a shop project. That means a good-guy discount on his labor, with the understanding that his full-pop Indian Engineering customers come first. And then some things just take time. To get power from the Ford's north-south crank to the Harley gearbox, Drabek fitted a housing that contained 90-degree bevel gears, probably some $25 part from a West Texas oil field.

Unfortunately, during the bike's decades stay in the shed, water had entered the housing, pitting the gear teeth beyond rehab. With no manufacturer's name present and no serial number on the housing, a replacement couldn't be found and we were forced to have new gears cut – an 18-month, $2,000 process. 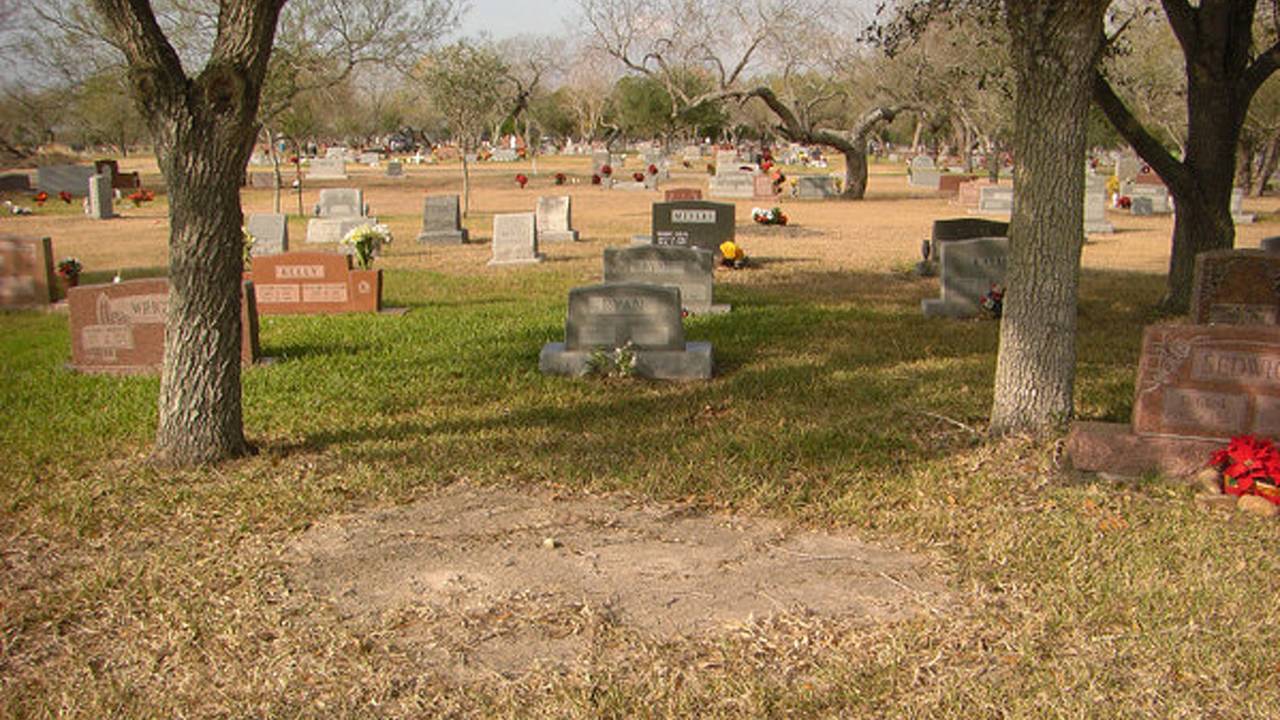 During the extended restoration, Jennie Drabek passed away. She's now buried beside her beloved husband Bill in the Kingsville Cemetery. Sadly, no headstone marks the couple's final resting spot, nor is there a next of kin interested enough to provide one. Looks like I'll have to add a granite marker to the V-8's restoration tab. Seems like the right thing to do...after all, I have the man's motorcycle.