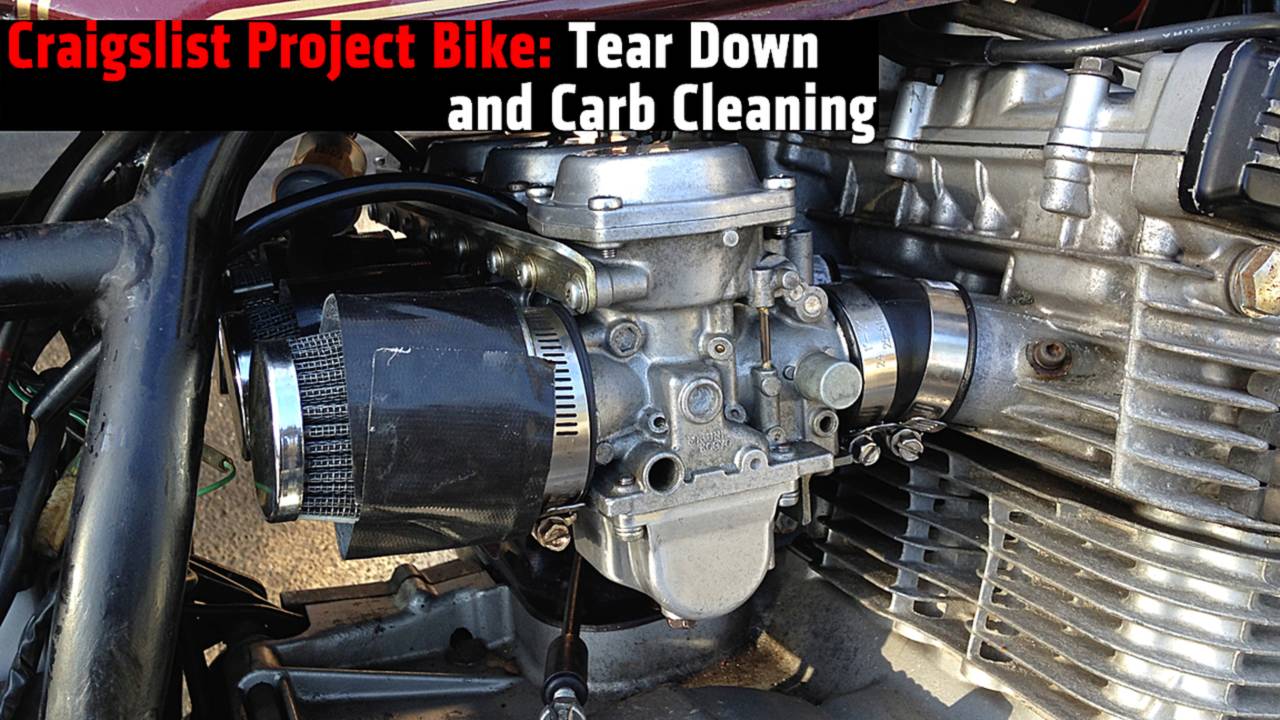 We get a little dirty and somewhat organized as we bring you up to date on our Craigslist project, a 1981 Suzuki GS750.

We asked readers how we should build our latest Craigslist project, a 1981 Suzuki GS750. It came with a killer front fairing and loads of extra parts like shorty exhaust, dual-disc front end and wheel, and chrome fender. We payed $200 and decided to have fun building it into something unique.

We received a wide variety of responses. If you remember the first article posted, we listed a couple viable options: complete original restoration, cheap café, traditional café, flat tracker or flip it and find something else a little more interesting. There were many custom-bike suggestions from the dual-purpose rat bike idea to the low-seat, cutdown version, but we wanted to take a big bite of this project and pray we could swallow it.

We hinted at the idea of competing in the Dirt Bag Challenge: 30 days, $1,000, build a bike and compete on a 60-mile ride. Most of the winners built outlandish, unrideable bikes. To put some of your minds at ease we won’t be competing and don’t plan on building an unridable piece of "art".

We decided to build a bike that's meant to be ridden, simple as that. Most upgrades we perform will be for the benefit of the rider, with some cosmetics thrown in for our own cool-measure.

We aren’t exactly sure what the final product will be, but we have a few goals and ideas:

I’m not a huge believer in sketches and hard-fast planes as that can get in the way of progress and expense. We do, however, have a few visuals we want:

Get the Bike Running Right

Before we can do anything, we have to make sure the bike is tip top. I learned this as an appurtenance at a hot rod shop in North Carolina. You must check the operation and functionality of every moving part, before tear down. During reassembly, this can save you days of headaches and work.

We already knew the bike would run and idle, but we had a slight tuning issue. Under load the bike bogged hard and didn’t recover. The pop-on air cleaners let in a tremendous amount of more air than the stock air box and are notorious for creating lean conditions. We started covering parts of the air cleaners to temporarily force the bike to richen up. This seemed to help.

One test to indicate a lean bike, was pulling the choke. Please do not try this at home. Driving down an empty road at a steady 20mph, we slowly pulled the choke. The bike sped up, telling us it was screaming for more fuel.

When the bike became hot, it started with the infamous ghost idle, where the bike would rev up slowly and when we turned down the idle, it would cut off.

First we checked for an intake leak and then disassembled the carbs using instructions we found online and in our Suzuki service manual. Luckily someone had rebuilt the carbs not that long ago, so the gaskets were in pristine shape.

We noticed our intake tubes were fairly new, so we lubed them and replaced our bottomed-out factory clamps with radiator hose clamps (not the cheap ones). During all of this another problem arose: While leaned over on the kickstand the carbs began leaking gas at a tremendous rate.

After cleaning out dirt and replacing the inline filter a couple times we decided to bring the carbs back to factory specs. We first set the float bowl level, which had been way too high and might have caused our overflowing problem.With the carbs upside down we slowly and carefully bent the float's ears so the body of the float rested between .84 and .92 inch above the body of the carb (while it's upside down), using the bottom of our calipers to measure.

After the carbs were on and off a few more times we finally decided to raise the needle, as the bike still requested more fuel. Raising the needle is common when installing less-restrictive air cleaners and open exhaust. Our Mikunis were unlike a traditional CB750 carb. We had a spring that held the needle up inside the slide. We had to replace the top plastic washer with smaller washers, physically raising the needle into the slide.

With two small washers on top, our under-load bog disappeared, but we still had an erratic idle. After doing some Internet search and with the help of reader Armando Domingos , we ventured to GSResources.com and discovered we made a silly mistake. While setting the carbs back to factory settings, we mistakenly put our air screws too lean with 2 turn out from bottom. The factory requires 2.5 turns out.

Problem solved, turning the air screws a half turn made a tremendous difference. Hot or cold, under load or at idle, the bike had awesome throttle response and great pull.

At this point all that remains is some fine tuning, as under hard load from around 3,000 rpm to 4,000 rpm the Suzuki falls on it’s face, but quickly recovers. Some of our old-timer mechanic friends chimed in and they believed this might be an issue we have to live with as our Suzuki has one of the first electronic ignition. It's hard to dial in this ignition as that's the point the timing advances. We may try to re-jet the bike and play with timing to get it perfect, but for now, we’re satisfied.

We still had electrical issues as the headlight would cut out occasionally and the turn signals don’t work. Those issues will fix themselves as we plan on rewiring the bike anyway. Now that the bike was running great, braked and steered properly, we're able to start the fun part – tear down.

We also did a compression test using an auto-parts rental tool to make sure we had good compression on all four cylinders. It's tight!

We took our time, took notes and had plenty of boxes, sandwich bags and markers. Luckily, the main harness and front harness are plugged into each other with specific plugs that you can’t mess up when reinstalling. For the rest of the pieces we traced wires back to their origins, taking video notes on phones and leaving marked tape on wires.

The engine required the removal of six mounting plates and a couple bolts. We laid the entire bike over onto our Craftsman bike stand and then lifted the frame out from around the engine. Now, we’ve begun prepping the frame for paint, removing any unnecessary brackets and cleaning up sloppy factory welds.

The engine will receive spray-bomb, high-temp engine paint, but needs a heavy cleaning. We covered the intake and exhaust ports and scrubbed the engine with Home Depot pipe-cleaner wire brushes and Purple Power cleaner. We used our Harbor Freight grinding wheel with a cheap wire brush to tackle any area it would reach. We found some smaller brass brushes designed to work with electric screw drivers at the swap meet that we will also use before painting. The better the prep, the better the final paint.

We picked up a new front end off of a Suzuki RM250 with inverted forks for cheap off of Craigslist. We also found a mono-shock swing arm from a dirt bike along with a Triumph seat and a CB750 tank that needs restoration. In our next installment we’ll show how to restore a gas tank and properly space a swing arm. The new pieces are an odd-ball combination, but we have a few ideas in mind that will make for a cool bike.