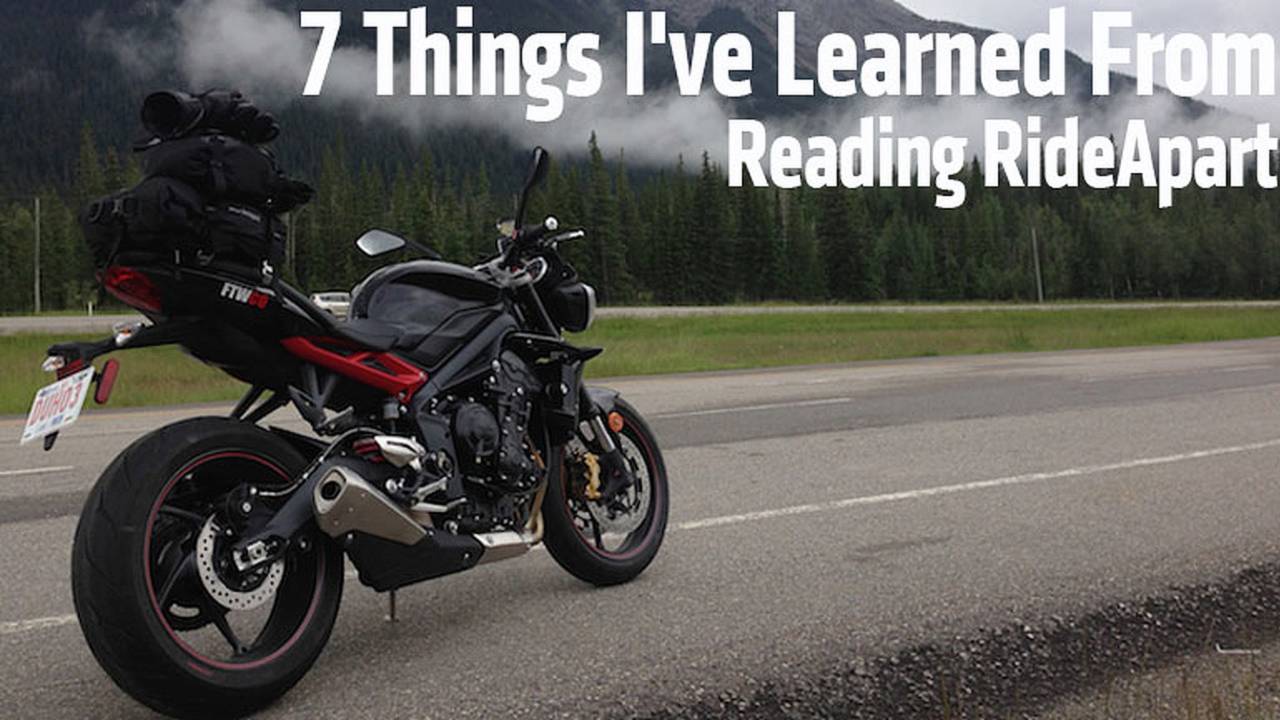 Meet Curtis. He’s a longtime reader of RideApart. He rides an ATV all day at work in Canada's booming energy industry, and has a 2013 Street Triple R as his daily ride. Aside from his degree in English and the technical manuals he has written, he also lives and breathes all things motorcycle. So we’ve hired him as our new intern. – ED

The guys at RideApart pulled me in as a regular reader from their tangible enthusiasm for motorcycling, along with that that Bonneville video. These guys were crazy about riding good bikes, and wearing good gear that looked as good off the bike as on. Plus, they were closer to my age and I could relate to the way they felt about bikes. So long story short, I sent a tweet and now I’m an intern. Here are the top seven things I learned from reading RideApart before my apprenticeship began.

1. You can ride safely without looking like a Power Ranger.

When I started riding, I was most interested in bikes with character, low horsepower, air-cooled bikes with strong potential for brat, café, and tracker modifications. All of the people riding these bikes were sporting ¾ lids, denim vests and looked a bit like an urban lumberjack. I thought it was cool, and then I read, 10 Things I’ve Learned From 10 Crashes and started combing the gear reviews. There was so much out there that looked cool, but at the same time helped keep you safe. So, I’ve put down my Schott jacket and that well-worn pair of jeans and traded them in for ICON D 30 Armor and Kevlar lined denim. I’m also the proud owner of a made-to-measure Aerostich riding suit.

2. Spend time researching the right helmet for your head.

I spent a misguided first year of riding toggling between a Dirt helmet that fit a round oval head shape, a dual sport helmet that whistled like crazy and was a size too small, and a ¾ helmet that fit fine, but was a ¾ helmet. Those are never the right option for keeping your face in place. I’m now happily wearing an Arai RX-Q after spending time with other readers in the comments section of Ask RideApart: What Should I Look For In a Motorcycle Helmet?

Alertness, body position, throttle control, and brake control are all crucial to being a better, safer rider. Turns out, being a fast guy in the corners is much more rewarding than hitting WOT in each gear down the freeway. One of the best things I did was follow more skilled and experienced riders in technical riding scenarios. By mimicking their body position, I had better body and bike composure in turns.

The Triumph Street Triple R is excellent for all purposes.

I have to ride four hours to get anywhere with corners. Most of my riding is done on city streets or secondary highways. My Street Triple R can break every speed limit in Canada in first gear, and what I get as a compromise is a bike that I can ride pretty much everywhere with pavement or firm gravel.

Frame sliders, bar ends and bark busters did wonders for my confidence. They’re cheaper than a deductible and if you or your bike takes a spill, you can rest assured that your bike probably won’t be FUBAR when you pick it up.

6. Pretty much every motorcycle is cool.

This isn’t to say I necessarily want to own every kind of bike, but I think most sectors of motorcycling have an appeal. I’ve ridden 11 second Dynas with composite brakes, café racers, street trackers, dirt bikes and supermotos. There are few things that are more exciting than getting on a different bike, or spending a day swapping bikes with your friends.

While techniques may vary slightly, one of the best ways to learn and improve riding skills is by getting off-road. My second year of riding, after many failed attempts to “fix” my CB750, I broke down and bought a Cruiser, and an XR400R. Take a wild guess which bike I had more fun on? Which bike I learned more on? Which bike I crashed, picked up and rode away with a grin instead of as a write-off? Which one do I still have? You guess.

So that’s a bit about me and the things from RA that made a difference in my riding. What did you learn here that helped you?

Learn: 10 Things You Need To Know About Motorcycle Body Position For Sport Riding

Safety: How To Ride a Motorcycle In The Rain