Back To School Bikes 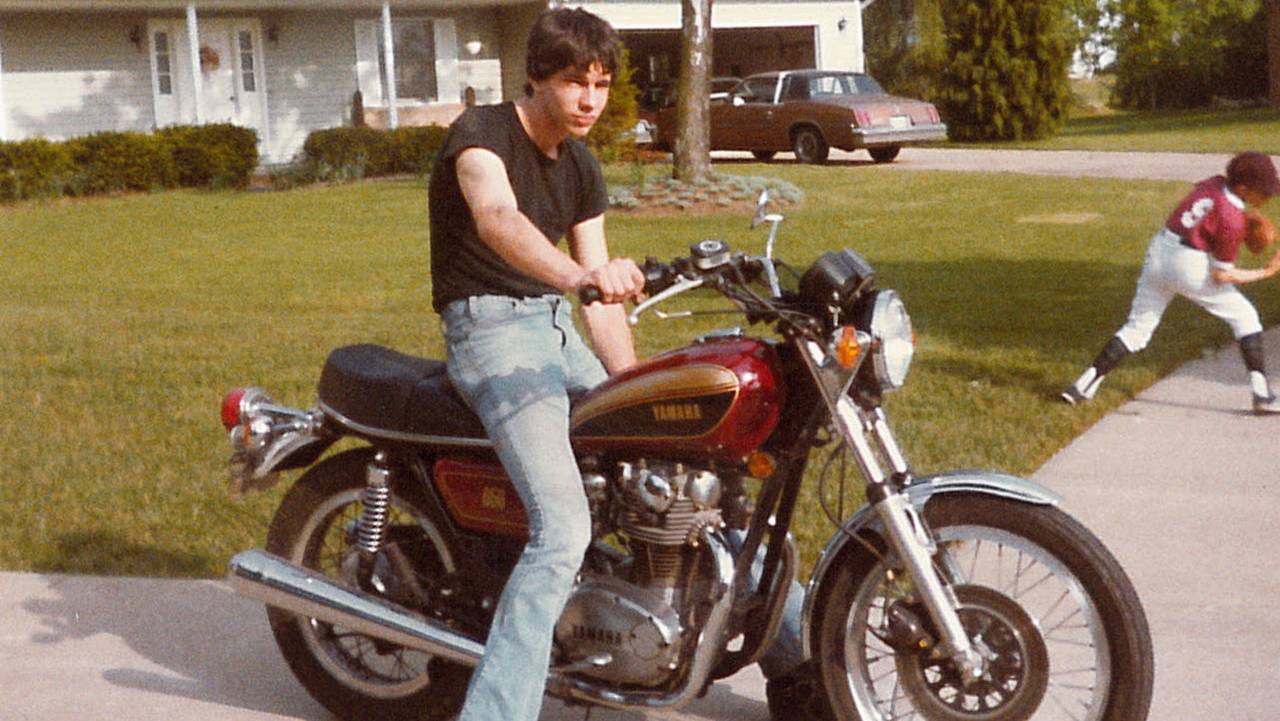 Back To School BikesHeading to (or back to) college next month? The right motorcycle won’t just get you to class fast and efficiently, but it’ll end...

Heading to (or back to) college next month? The right motorcycle won’t just get you to class fast and efficiently, but it’ll end up saying as much about you as that backwards Abercrombie hat and those acid washed jeans. Get the right bike with our help.

College isn’t just a chance to put yourself in massive debt, thereby locking yourself into a lifetime of indentured servitude to The Man, it’s also a good opportunity to learn stuff. Keg stands, music piracy, Ramen noodle recipes, the list is endless. So, why not learn a little about motorcycling while you’re there, too? Easier parking, drastically lower fuel bills and a chance to wear a leather jacket without looking like that funny student visiting from Italy. Of course, it’s important to choose a motorcycle that conveys your desired social image, allowing you to adequately conform to a specific cultural strata.

If all your dude bros are driving Jeep Wranglers you a) don’t have to worry about hauling kegs, because they can do it for you and b) need something that appears suitably rugged parked outside the frathouse. The F800GS Adventure’s badge will be recognizable even to the sorority sister, while the outdoorsy image should perfectly accentuate your popped collar. Buy the beige one.

You need a bike that demonstrates your elegant taste, wasn’t appreciated by the masses during its lifetime, but that can still bring home big boxes of material from the art store. The Ducati Multistrada 1100 was designed by oft-misunderstood genius Pierre Terblanche who, just like you, wears black turtlenecks and black framed glasses. It was considered odd and overwrought in its day, but now looks futuristic and clean next to Ducati’s current range. It’s also comfy, fairly light, handles more than well enough to manage a track day and has plenty of room for a passenger or tons of luggage. They’re cheap in the used market right now, too.

Reddit is a popular online forum for fans of creepy photos and Ninja 250s. If you’re the kind of college student that prefers Internet friends to real world friends, make sure you choose a bike that’ll be accepted by your community. The new Ninja 300 may simply be refreshed styling on a 27-year old motorcycle, but it also guarantees you acceptance by, and virtual friendship with, other Internet nerds. Other bikes, the groupthink goes, just aren’t sensible. And sensible decisions are why you’re sitting in the computer lab, all alone, at 3am, right? Go green for the full nerd effect.

Look, we know your school can’t technically pay you to play for it, but they can help you offset the cost of attendance by subsidizing your transportation, right? And, when it comes to an athlete’s needs, there’s nothing that says “First Round Draft Pick” like Suzuki’s Hayabusa. Just ask that Redditor down the dorm hall to read the fine print on your contract first, it may ban dangerous activities like motorcycle riding and actually showing up for English 101.

Work out all the cost of ownership factors in a spreadsheet — down payment, monthly payments, gas, insurance, maintenance, wear items — and you’ll soon figure out that there simply isn’t more economically sensible transportation than the CBR250R. The $4,700 price tag for the ABS model is around what you earned each month as an Intern on Wall Street last summer and, at over 70mpg, your monthly fuel costs will be lower than your Android phone bill.

You walk into a room and everyone knows you’re different. Maybe it’s the $200 haircut, the $800 shirt, the $9,000 Rolex or all that dental work. But really, those are just external signs of your good fortune. Achieve the same effect with the Moto Guzzi V7 Racer Record. It’s rare, expensive, flashy and timeless. More importantly, it’ll look just as good parked outside your college town condo or your family’s ancestral home in the Hamptons.

Handmade, dead stock canvas duffle bags full of faux workwear ready to go? You’ll need a bike that projects a suitably classic sense of masculine identity. Something from a bygone age when men were men, beards weren’t ironic and you’d have been laughed out of the working mans club for your puny little arms. The base Bonneville is the fastest, most capable bike in Triumph’s Modern Classic range, giving you all the classic bike image without having to get your hands dirty or leaking oil onto your $800 “work” boots.

Nothing says “rebellion like repurposing your parents’. The Iron 883 is the cheapest bike in Harley’s range and, at 573lbs, the lightest. So it’s the easiest way to be ironic with your motorcycle choice while retaining some actual two-wheeled function. The blacked-out looks go great with skinny jeans and guy liner too.

Well, you won’t find a better excuse for skipping class than going for a motorcycle ride, so you may as well have a fun bike. And a cheap one, since working nights and weekends obviously isn’t a choice. The Honda CB500F is a blast to ride, will save you money on gas and, at $5,000, shouldn’t be that hard to convince your parents to buy you one. Just promise to get a C average this semester.

You’re responsible, you’re a forward thinker, you’re an influencer and you’re an agent for change. Or so you tell everyone, over and over and over. The electric Zero S will make short work of campus commutes, allow you to leach off the school’s electricity (a student government privilege, surely) and keep your late night…rendezvous private thanks to its silent operation. Plus, you get to be all smug about riding an electric vehicle that’s kinda, sorta made in America.

Everyone thinks you just care about the environment, but really, you’re more worried about leaving the trials and tribulations of the modern world behind, preferring a more simple, connected way of life. There’s nothing simpler or more classic than the Ural Solo ST, a motorcycle based on a pre WWII design and still largely hand made at an old factory in Siberia. Not quite the two-wheeled equivalent of a VW Bus, but much of the same character.