Take one of the most popular middleweight adventure bikes on the market and maximize its long distance comfort, dirt safety and crashability. Voila, you have the 2014 BMW F 800 GS Adventure. We just rode it through the Colorado and Utah backcountry.

To the current BMW F 800 GS, BMW has added a host of accessories and upgrades, but hasn’t altered the basic package. The 85bhp, 61lb-ft, 798cc parallel-twin is unaltered, as are the unadjustable, 43mm, upside down forks and the fully-adjustable monoshock. Suspension travel remains 9.1 inches (front) and 8.5 (rear).

The biggest upgrade is probably the new fuel tank, which increases capacity from 4.2 to 6.3 gallons, thereby improving the range from around 248 to 347 miles. Riders who like covering big miles in as little time as possible, or who simply enjoy exploring a long way from the nearest gas station will find that 40 percent improvement incredibly useful.

Complimenting that increased distance between fuel stops is a new, much larger windscreen that totally shields the rider’s upper body from wind and a taller, more comfortable seat that increases in height to 35 inches.

Larger plastic bodywork around the radiator serves double duty, shielding the rider’s legs from weather while also protecting the radiator from damage in off-road tumbles.

There’s also beefy engine protection bars at the front and a standard luggage rack at the rear which is also designed to protect the fuel tank. The subframe is made stronger to accommodate the additional weight of the larger fuel tank and to better resist crash damage. A standard luggage rack is mounted to the rear.

Hand guards round out the package. They’re strong and provide excellent protection from weather, but are made from plastic without aluminum or steel reinforcement. 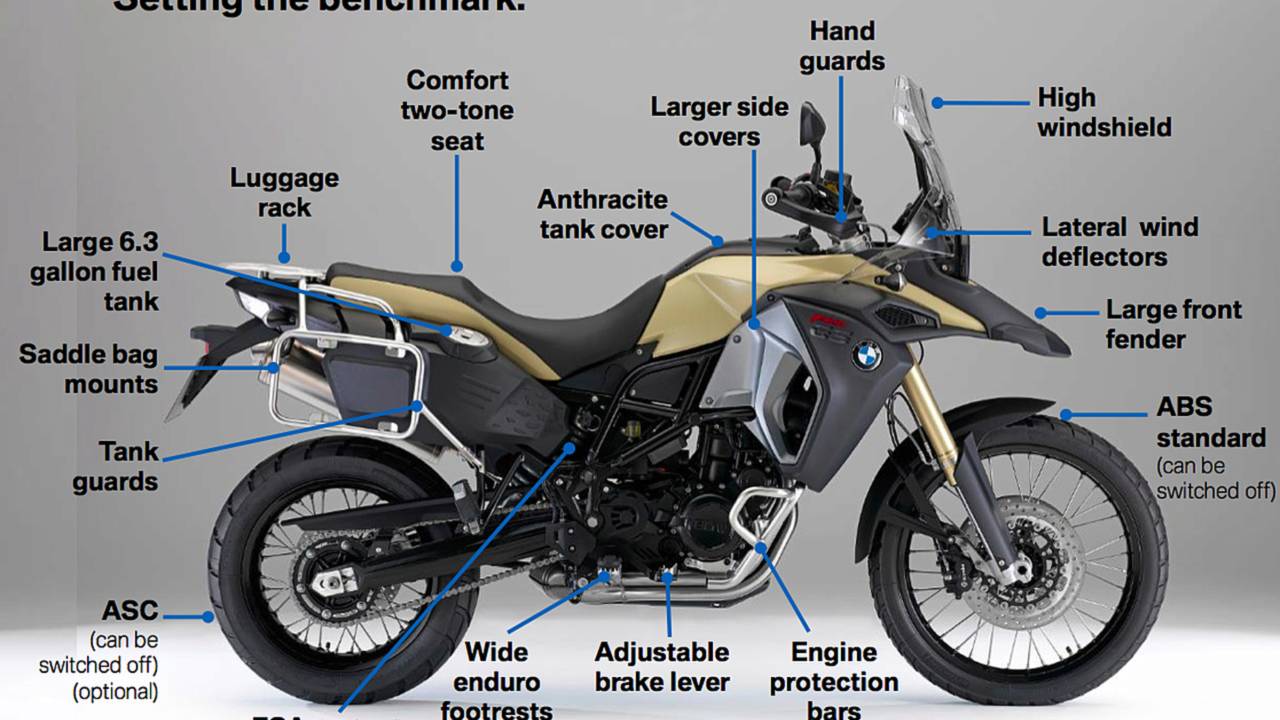 ABS is included as standard and can be switched off, but upgrade to the optional “Enduro” package and you gain an “Enduro” mode which is designed to work in the dirt as well as traction control with the same setting.

You can also add heated grips, a trip computer, a center stand, LED fog lights and electronic suspension adjustment designed to make adding a pillion or luggage simply a case of hitting a couple buttons.

The bike we rode was equipped with all the above, with the exception of ESA. 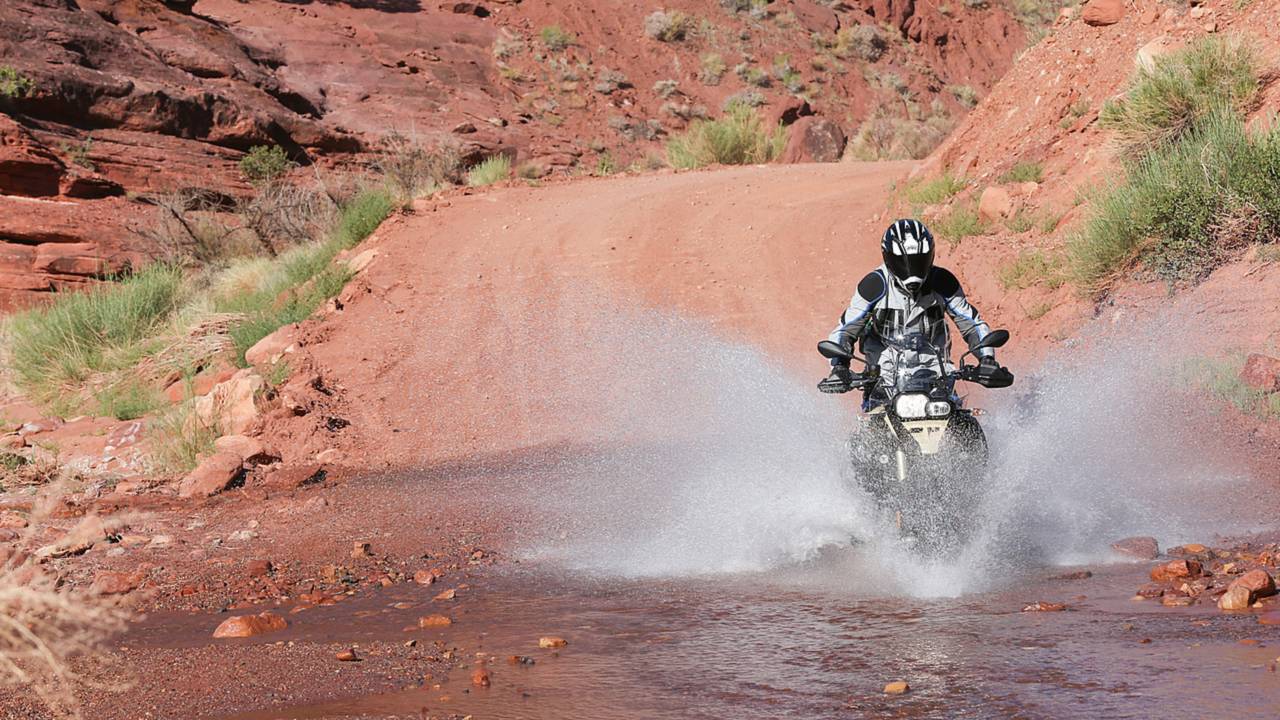 Departing Moab, Utah, we embarked on a 175-mile loop through the desert and mountains, crossing into Colorado where we exceeded 10,000 feet in elevation.

Roughly two-thirds of that was on dirt fire roads and trails which varied from hard-pack to sections of deep, loose sand with large rocks thrown in for some added fun.

On road, we cruised down deserted desert highways, dragged peg up smooth mountain switchbacks and spent a fair amount of time on crumbled, poorly maintained roads of the kind you’d expect to find in the middle of nowhere.

The first half of the day was the most challenging as we climbed out of the Colorado River valley and up into the mountains through all that deep sand. I’d put myself into “Enduro” mode for both the ABS and Traction Control (which BMW calls “ESC”), which is simply a case of hitting a “mode” button on the handlebars. That backs off intervention levels for both systems, allowing a little bit of slide under power or when hitting the brakes.

The bikes were fitted with Continental TKC80 tires, our choice when taking big, heavy bikes like these off-road, and a tire we have a ton of experience with.

The first problem with ABS occurred while entering a tight, 1st gear, downhill hairpin. I approached it with a fair amount of speed, figuring I’d lean on the brakes to shed speed at the last minute. When I did, the steepness of the descent combined with the loose surface to leave the ABS cutting brake power rather than delivering the controlled slide I’d been hoping for. No big deal, there was run off area which I was able to use.

The first problem with ESC occurred while tackling a steep, uphill, 1st gear corner covered in the aforementioned deep sand strewn with large rocks. I’d had to come to a stop on the uphill approach while another journalist struggled with a downed bike, then tackle the climb from a standing start. With TC in Enduro mode, the engine was cutting power and stalling as the bike and I tried to plug through the difficult terrain at a walking pace. Turning it off allowed wheel spin, but this is precisely the kind of situation in which ESC could have been a big help, delivering drive rather than just showering those behind me in sand and rocks.

Both ESC and ABS can be switched off very easily, at the push of a button.

That stalling was compounded by a too-tall 1st gear and an absence of torque in the parallel-twin’s very low rev range. Plenty of clutch slip was necessary anytime you dipped below 15mph. Combined with the F800GS’s high center of gravity and 505lbs (wet) weight, this made negotiating low-speed obstacles very challenging. Most of the journalists, BMW staff and even the experienced guides along for the ride dumped the bike at some point; many through low speed stuff like the corner described above.

I managed the very slow stuff without a topple, largely thanks to my atypical 34-inch inseam. The 35-inch seat height was about as tall as I could still manage to dab a foot or even paddle the bike over some terrain. Shorter riders, or those in a lower state of physical fitness weren’t so lucky.

My crash came not while trying to nurse the GS up a steep hill or over a difficult obstacle, but while negotiating a section of deep, loose sand in first gear. With ESC switched off from the previous climb, the rear wheel stepped out through a rut and the subsequent bar turn caused me to twist the throttle unintentionally. I hit the ground at about 25mph with no damage to myself and only a bent shift lever on the bike.

If anything, the difficult conditions highlighted how crash-worthy the Adventure’s upgrades make the bike. With virtually every one of the machines hitting the ground at some point, including a 30mph-ish slide off a small cliff for one of them, the only damage to any of them amounted to not much more than scuffed plastics. The guy that went over the cliff did have to spend the rest of the day riding with bent handlebars though.

My biggest problem wasn’t with electronic intervention though. It was with the problem those rider aids were tasked to help with. Throughout the day I was unable to find much confidence — or grip — from the front end. I chalked that up to a couple reasons: Like most other ADV bikes, the GS is equipped with a road-style seat that doesn’t allow you to put your weight terribly far forward. Those 6.2 gallons of gas (and we rode with full tanks all day, even topping up at lunch) aren’t carried above the engine either, but under the seat, very far to the rear. That decision was made to lower the GS’s center of gravity, but while it does to that, it also puts 38lbs that could have been useful for planting the front wheel over the rear wheel instead. The 800’s fairly limited, unadjustable forks probably also have something to do with it, as does the engine’s position, which places the radiator between wheel and motor. The Yamaha SuperTenere, which uses side-mount radiators to bring the engine as close to the front wheel as possible, has a hugely confidence-inspiring front end, which is saying something on a bike that weighs 636lbs (wet).

Disappointed by this, I asked other journalists along on the launch if they were experiencing the same thing. Half of those I asked said “yes” and half “no.” Later, following the day’s riding, one of them thought to check the tire pressures. We’d been told the BMW-prepped bikes were aired down to suit the terrain, but he found his front pressure set at 36psi instead of the 17 or 18 range I’d have thought more appropriate. By then, I’d lost track of my bike and was unable to check the settings.

It’s possible some of the bikes we rode that day were improperly set up, including mine, so we’ll reserve criticism for when we’re able to spend more time on the bike.

Throughout the afternoon’s less challenging terrain and on the road, the GS did a much better job of living up to its reputation as one of the more capable adventure bikes. Compared to the slightly-heavier R 1200 GS, it remains easier and faster off-road and nearly as comfortable on it.

The new, taller screen does an excellent job of deflecting the wind; the airflow cleared my shoulders completely while leaving my helmet in a buffet-free zone of undisturbed air. The taller seat proved comfortable on our longest on-road section (35 miles or so) and the wider footpegs (with rubber inserts removed) do an excellent job of gripping your boots, but could be made wider still to make standing for hours at a time more comfortable.

At 6’ 2” tall, the stock ergonomics were just slightly too short for totally comfortable standing, but that could be fixed very easily, with moderately taller bars.

All in, the Adventure upgrades are very useful and expand the capability of the bike. 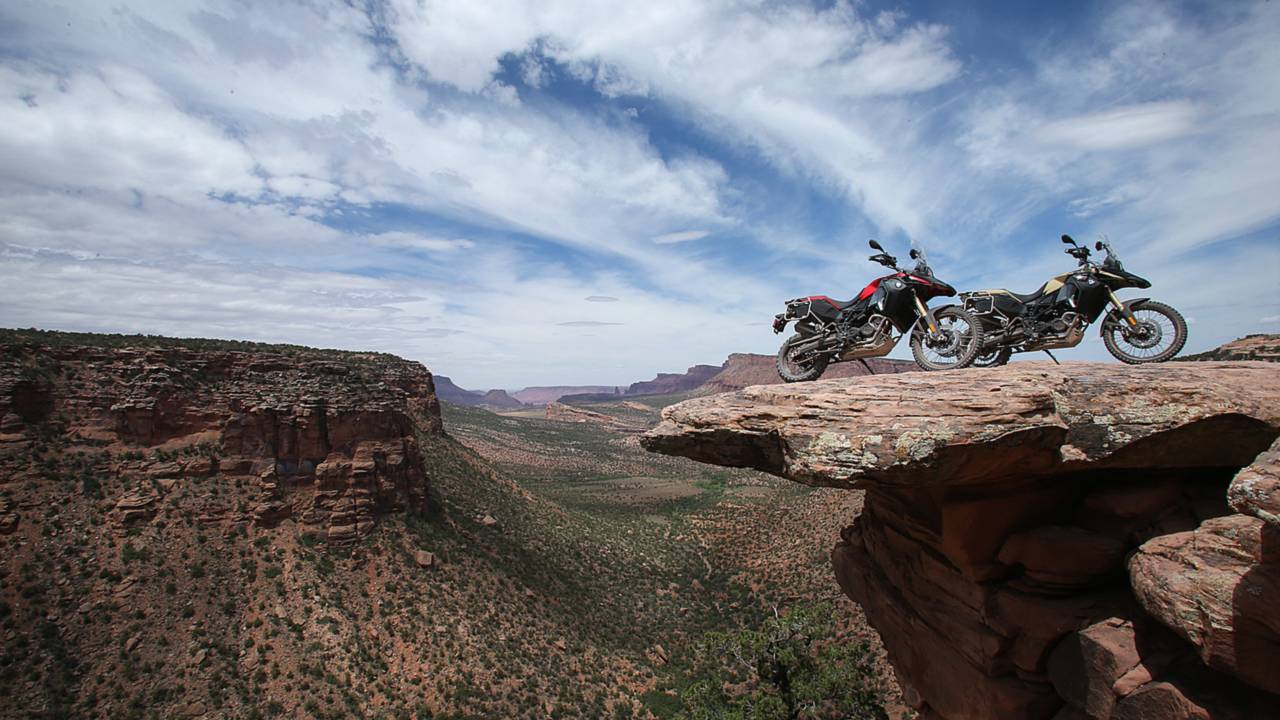 Takes a licking and keeps on ticking. Nearly every one of the 25 or so bikes along for the ride took a spill, yet none experienced any significant damage.

Nearly 350 miles out of a tank (on the road), is hugely useful, particularly when riding in out of the way places, as ADV bikes are designed to do.

The new seat is all-day comfortable, if a little tall for some riders.

The clutch is light, linear and feelful. Good, because you’ll be using it a lot off-road.

The tall screen does an excellent job of redirecting the wind without buffeting the rider.

The little pad that folds down to effectively raise the brake pedal is extremely clever and useful, indicative of BMW’s rider-centric approach to designing these motorcycles.

Lighter and faster off-road than its R 1200 GS stablemate.

Even in “Enduro” mode the ABS intervenes too soon.

Even in “Enduro” mode, ESC hampers more than it helps.

The front end could possibly lack feel and grip, something we’ll take a deeper look at soon.

Stock ergonomics are somewhat limited for the very tall.

The motor lacks low-end torque and is geared too tall for off-road use. Fitting a smaller front sprocket would resolve that problem, but make the 800 buzzy at highway speeds. The change should really be made in the gearbox, by BMW.

Remains heavy, with an high center of gravity, despite BMW’s efforts to address this.

The F 800 GS Adventure isn’t cheap. Theoretically, you can buy a base model from dealers for $13,550. You’ll need to custom order that bike however, because all models destined for US dealers are fitted with the “Premium” package, taking MSRP up to $14,350. If you want the LED fog lights and Electronic Suspension Adjustment, the “Fully Loaded” packaged takes the price up to $14,995.

The lighter and less powerful Honda NC700X is just $7,500, but has a better front end, much lower center of gravity and extremely useful low-end torque. It’d be our choice if we were looking to get into ADV riding for the first time and would have been easier to ride and more confidence inspiring than the F 800 GS in these conditions, when fitted with the same TKC80 tires.

The upgrades from “regular” F 800 GS to this Adventure model are genuinely useful, expanding the bike’s capability, comfort and crashability. Unfortunately for what’s supposed to be the most dirt-capable bike in BMW’s lineup, it’s limited off-road by its lack of low-down torque and, potentially, by a vague front end.

The bag that fit all the above, plus laptop and clothes in carry-on: Maxpedition Fliegerduffel