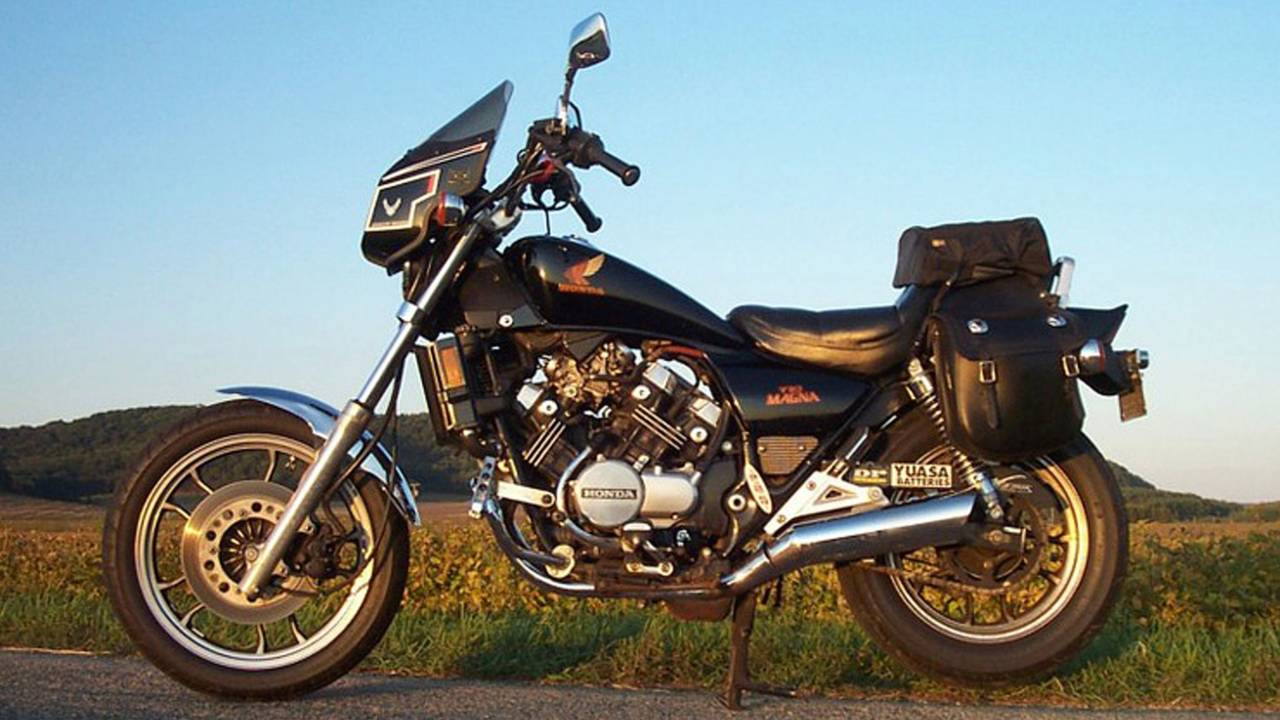 If you cruise listings of bikes for sale from the 1980s, you’ll notice an odd dip in the 45 cubic inch class, where you’d expect to see 750cc displacements. Suddenly, some models became 700cc bikes between 1984 and 1987. It's an odd symptom of an economic and political fight that has left a legacy of bikes known as “tariff bikes”—and maybe some other terms, as well.

It goes back to Harley-Davidson’s struggle to slow the loss of domestic market share to imports—particularly the flood of high-powered 45 cubic inch and larger displacement bikes from Japan.  It has its roots in the survival of the Motor Company after then-owner AMF had put the company up for sale in 1981, and Vaughn Beals together with a dozen other true believers including Willie G. Davidson crafted a leveraged buy-out.

MUST READ:  Time To Get On Track - Kickstand | RideApart

The Motor Company’s products were already struggling in the marketplace, dogged with a reputation for poor quality and products whose time had come and gone. Making matters worse, Asian manufacturers like Honda, Yamaha, Kawasaki and Suzuki were slamming the U.S. market with multi-cylinder superbikes that were fast, reliable and perhaps worst of all, affordable. Particularly galling was the practice of Japanese manufacturers to clear out unsold inventory at fire-sale prices—a practice referred to as “dumping.”

Harley-Davidson couldn’t do anything about the fast and reliable part, but they could try to fight back by driving up the cost of owning an imported bike. To implement that strategy, H-D needed government intervention.

On September 1, 1982, Vaughn Beals petitioned the International Trade Commission (ITC) for relief from what he would assert amounted to unfair foreign competition—“anti-dumping” practices as they were known. The petition sought protection in the form of a tariff on heavyweight (700cc and up) motorcycles and powertrain subassemblies.

Japanese government officials reacted with anger but the Japanese manufacturers responded with moxie—they rolled out bikes with displacements of 694 to 699cc. Honda introduced four such models in 1984, Yamaha introduced one such model for 1984 and Kawasaki moved to manufacture some models that would have been impacted by the tariff to the U.S.

Though the tariff was supposed to last five years, Harley-Davidson actually requested it be lifted in early 1987 as sales began to improve with the introduction of the Evolution engines in 1984. It’s difficult to say whether the tariff played much of a role in helping turn H-D’s sales doldrums around or whether other factors in the economy were more important.

As for Honda—perhaps the biggest target of the tariff—it coincidentally had a new V4 cruiser displacing under 700cc set for introduction in the 1984 model year: the VF500C, also known as the V30 Magna, and its sportbike cousin, the VF500F Interceptor. The same year, the VF700F Interceptor and VF700C V40 Magna and VF700S Sabre models came ashore to fill the gap between the 500 and 700cc displacement points. To create the 700cc version of the 750 V4, Honda shortened the stroke by 3.2mm, preventing the need for altering the heads if bore dimensions had been reduced.

Too big to duck the tariff were the 1984 VF100S V65 Sabre and VF1100C V65 Magna. That fact may have had a limiting effect on how many of those models were shipped, at least in the first year of the tariff when the tariff was highest.

Without intending to, I wound up with three survivors of the tariff war period: a 1984 VF1100S V65 Sabre, a 1984 VF500C V30 Magna and a 1985 VF700C V40 Magna. In fact, I hadn’t been aware of the odd circumstances that led to the brief flurry of 700cc bikes until I bought one. After years of 750cc bikes, I wondered why would the manufacturers opt to come out with marginally smaller displacement bikes. The answer came as something of a surprise.

Being that 2015 is the thirtieth anniversary of the V40 and that it is such an odd duck, we thought we’d take a look back at that bike to see how well it held up after all these years. If the tariff war caused any belt-tightening at Honda, it isn’t reflected in the build quality of the V40 Magna. At thirty years of age, the VF700C Magna still starts and runs like a new bike.

MUST READ:  Troopers Shoot Biker and End Chase In the Most Chuck Norris Way Possible | RideApart

In early 2008, driving along a county road, I spotted a bike for sale at the roadside, and as is my habit, I stopped to take a look. It turned out to be a 1985 Honda VF700C Magna that was in pretty good shape and was its owner’s daily rider. In trying the bike on for size, I noticed the saddle is deeply stepped and produces a smooth, but rather cramped, ride even for somebody who’s on the short side like me. The bars rise fairly high and pull back quite a bit creating a low “ape hanger” feel.

The VF700 comes with a shaft drive like the other Honda V4s of the day—except the VF500C, which uses a chain. The Magna and Sabre models came with six speed overdrive transmissions; the Interceptors had five speeds.

Having owned a VF500C V30 since 2005, I was interested in how they would compare. While the engine is basically the same liquid-cooled, four cylinder, double overhead cam, four valve per cylinder type used on the V30, the power delivery of the VF700C is much more sedate than the V30.  There is more total horsepower available and there is a power surge above 6,000 RPM, but it is not as aggressive as the V30. This is not a flaw—it is by design. While the little V30 was designed to have in-your-face acceleration nobody would expect from a 500cc bike, the VF700 was designed to combine smooth-as-glass engine operation with the comfort and poise of an all-day cruiser with two-up touring capability.

The forks have a long, kicked out look and the tank seems to tilt up toward an elevated steering head, giving the bike a “custom” stance. Unlike the VF500, which comes equipped with a single disc brake up front, the VF700 has double-disc brakes and TRAC Honda’s version of anti-dive front suspension. TRAC, which stands for torque reactive anti-dive control, differs from the hydraulically activated anti-dive system introduced four years earlier on the Yamaha Seca 750.

While the Seca system is activated by hydraulic pressure from the front disc brake transferring pressure to the lower fork legs to prevent dive, the TRAC system is activated by the torque reaction of the brake caliper itself when braking force is applied. This combination gives the VF700 solid road feel and stability under hard braking, even with two aboard.

Like the other Magna/Saber/Interceptor models, some routine maintenance functions take a little getting used to, but one thing you may overlook if you're lucky enough to acquire one of these V4 powered bikes is that the 700, 750, 1000 and 1100 cc models have two oil drain plugs that have to be opened at each engine oil change. One is in the place you’d expect to see a drain plug on the bottom of the oil pan, the other is atop the forward-most pair of cylinder heads. Only about a half cup of oil might come out of there, but it’s necessary to drain it if you want all fresh oil in your engine.

The VF700C has a smooth, light feeling hydraulic clutch, and while there is no cable to lubricate or adjust, there is a reservoir to check on up on the handlebar. If the fluid level drops too low, the clutch can malfunction and then refilling and bleeding the system will be required. It turns out this is the only repair work I’ve ever had to do in the seven years I’ve been riding this bike.

The hydraulic piston seal on the clutch actuator finally wore out and had to be replaced. The seal kit to do the job is readily available and cost only about $25. With a couple hours of work and help from a service manual, I got the job done myself and it’s been good to go ever since.

MUST READ:  Moto-History – What Happened to Crocker Motorcycles? | RideApart

Instrumentation on the 700 is fairly standard: analog speedometer, tachometer and engine coolant temperature gauge, lights for oil pressure, neutral, turn signals, tail light burn-out, and a light that illuminates “OD” to let the rider know the transmission is in 6th gear (but there is no gear position indicator.)

If there is a flaw in the design of the VF700C, it's a minor one indeed. Access to the under-seat area of the bike is always a little awkward and putting the two-piece saddle back in place afterwards can also sometimes be a hassle. In most every other way, the VF700C is still an amazingly capable, comfortable bike that combines the smooth power of Honda’s liquid-cooled V4 powerplant, a six-speed  transmission and shaft drive with reliability and ease of operation—even after thirty years.