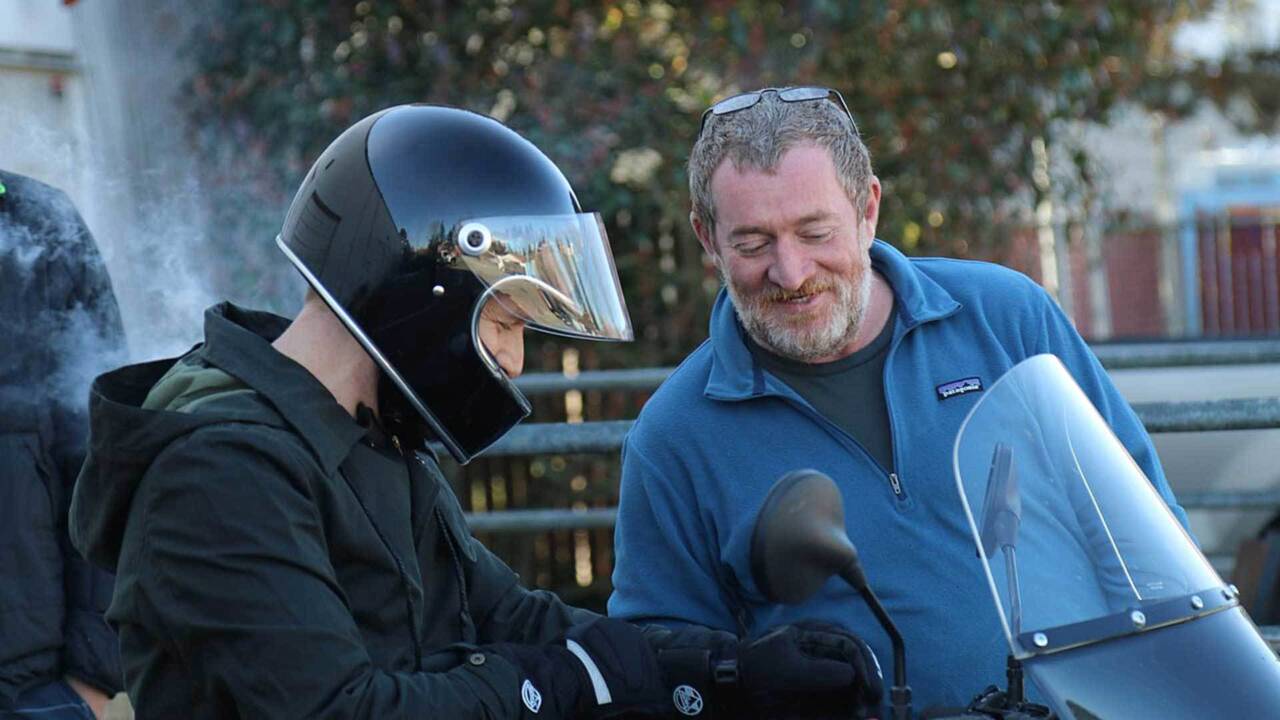 Ural has made great strides in the last twenty years in both quality and popularity. Today we interview Ilya Khait, the company's CEO, to hear all about it.

Wherein I sit down with Ural's CEO and get the facts about the company's long, arduous post-Soviet journey

Ural CEO Ilya Khait is a man of few words and bold vision. After falling backwards into ownership of one of the world's oldest and (formerly) largest motorcycle manufacturers twenty years ago, he fought against long odds, tradition, inertia, and plain old Russian stubbornness to bring Ural kicking and screaming into the 21st century. How did he do it? I recently sat down with him and, with a little translation help from VP of Marketing Madina Merzhoeva, got the scoop on Ural's rise from the rubble of Soviet central control.

MAY I: Twenty-Four Hours in Seattle with a Ural - Part 1

Jason Marker: Hi Ilya, thanks for taking the time to answer my questions. Let's start at the beginning. How did you get involved with Ural?

Ilya Khait: I used to work as a management consultant. One of my clients was the previous owner of this company. So, he bought this company twenty years ago in 1998, and hired me to look at the factory to tell him what he'd bought. When I got there I was terrified by what I saw. The Ural factory used to be huge. It was a massive, self-contained, Soviet-style facility that made all of its own parts and employed 10,000 people. At its peak, the factory produced about 130,000 bikes a year. At one point in time it was probably one of the biggest bike manufacturers in Europe.

After the well-known events of the Soviet Union when the country went from a centrally-planned economy to a market economy, the market for Ural disappeared overnight. In just a few years production went down to 6,000 motorcycles a year, and when I visited the factory production was down to 4,000 units a year. The company still employed around 4,000 people at that time. Like I said, it was terrifying. The previous owner tried a few things out, introduced some new models, but the factory was still very slow.

By 2000, the company had gone through two bankruptcies and the owner decided to sell the factory. I was part of a group of managers who came together to buy the factory from the previous owner. The factory was shut down for six months and we had to fire around two-thirds of the employees. It was extremely tough, and I still feel responsible for those people and the factory. That feeling of responsibility is why I decided to be part of the management buyout and why, after my partners stepped down after the buyout and left me alone with it, I stayed on. I guess I was the most responsible of the bunch so I got stuck with it!

JM: When you and your previous partners bought the factory, what were your initial goals? Did you have a plan for Ural? If so, after all these years do you feel that you've achieved or surpassed those goals?

IK: Well, people are still talking about Ural after 18 years, so we've been at least partially successful. The main goal was to keep it alive and stay afloat. So with regards to that yes, I think we did what we wanted to do, but of course we were much more naive or romantic about it at the time. We just didn't want to let the brand die since it was so important to Russia and, we felt, to the motorcycling community at large.

Also, I saw it as a challenge. Because I worked for many years in management consulting, I was excited to take this on because it was an opportunity to do something on my own rather than for someone else. It was a huge challenge just to hold it together, and I wanted to see if I could do it. I also felt that the world would be a worse place without Ural, so it was worth it.

IK: Basically, we identified three different places we could make big improvements—quality of components, engineering and design, and final production. We had to attack all three and it took many years. The most challenging was probably the components. You have to realize that up until the fall of the Soviet Union, Ural was a typical Soviet-style manufacturer. It made all of its own parts in-house and was totally self-contained. It had its own labs and foundries, and made everything from plastic parts to pistons to to headlights and wires. Every part of the motorcycles was made at the factory. It's like they say, someone who makes everything on their own makes nothing good.

Many, but not all, Ural parts come from outside suppliers nowadays.

So we had to identify the components we could reasonably and efficiently build on our own, then move everything else to outside suppliers. That process is still ongoing, but at this time we get probably 75-percent of our components from outside suppliers. Those suppliers are all over the world, I think our parts come from over 15 different countries at this point—from Europe to Asia to the United States...everywhere. We look all over the world for the best quality parts we can find.

Of course, this led to major downsizing which led to shuttering large parts of the factory and letting many people go. Along with the manufacturing, we outsourced a lot of services too. For example, we used to have our own trucking fleet, our own laundry, and our own power plant. To save the company and streamline production we had to close those in-house services and, sadly, let many people go.At this point we have 150 employees at the factory, down from our max of 10,000.

The second part was engineering and design improvement. Again, because of the history, Ural's designers and engineers were closed off from other companies. They were kind of marinating in their own juices. They were isolated and never exposed to outside ideas. They were just stuck in the past and, at that point, not really interested in learning anything new. This was complicated by the fact that we quickly learned that to make one small change we had to make a dozen more.

A Ural employee wrangles a frame into his work area.

ASK YOU: The Motorcycle Market According to Ilya

My favorite example is the handlebar controls we were using. When I bought the company I wanted to switch to more standard controls and hand grips, but Urals had handlebars that were 25mm. No one made components to fit 25mm handlebars, the industry standard was 7/8. So we switched to 7/8 bars, but that meant we had to then change the handlebar mounts, then we had to change parts of the steering head. We had to change everything that touched the handlebars and the handlebar mounts just to have common switchgear. Everything has been like that over the years, to make one change we have to make ten. Then there was the job of adding modern equipment to the bikes—disc brakes, fuel injection, things that are common on modern bikes but had never been used on Urals. This was a huge challenge, again because to make one change we had to make so many more.

Finally there was the manufacturing process. This was a huge challenge for us trying to improve processes and trying to implement modern quality control. This was due to the cultural aspect and a bit of the legacy thing. The workers were used to doing things one way and had done it for so long that they didn't want to change. Russians can be stubborn. They thought, "why should we change if we've always done it this way?"

For most Ural workers, a paycheck trumped tradition.

We did it, though. The changes we made really improved the quality of the bikes. Even though they look pretty much the same as they did even five years ago, they're much, much better now.

JM: How did you do it? How did you cut through that inertia and tradition to make a more modern workforce? Did you have to fire a ton of people and hire new blood, or were you able to get the workers on board?

IK: Well, unfortunately, we did have to let some people go. We hired various consultants to retrain people to use modern tools and processes, and on the whole our workers have been receptive to it. You have to understand, Irbit (the town where the factory is located) is a very very small town. Probably 35,000 people. The nearest city is 250 kilometers (155 miles) away, and the trip to the nearest airport takes about two hours. And that's over Russian roads. This makes the pool of workers we can hire from pretty small, so more people are willing to learn and retrain to keep their jobs than not.

JM: Of all the advances that Ural has made over the years, which one are you the proudest of?

IK: The one that will come. So far we've just been catching up. I mean, everything that we've done everyone else has already done. How many years ago did fuel injection become common on motorcycles? That said, I'm very proud of making all the improvements I mentioned earlier and still keeping the look and feel of the old bikes. I'm proud that we can respect that legacy while still moving into the future. Oh, and I'm proud that we survived economic crash in 2008. In January 2009 we sold four bikes at retail. We joked that while that was bad, we still sold more units than Rolls Royce. They only sold two cars that month!

JM: I have one last question for you before I let you go, and it's a pretty open-ended one. Why Ural? What does Ural bring to motorcycling, and why should more people know about it?

IK: A completely different experience, completely different. You share the ride with Ural, that's the whole point. This is why people buy Ural, they can share the ride and go together. We do this better than anyone. The traditional view of a motorcyclist is of a loner, a rebel. Maybe that's why the industry has the problems it has right now. Most companies play up the individualist, loner stereotype and Ural is the exact opposite.

It's all about sharing the ride.

Ural is an invitation to share a ride, it's about sharing and doing things together. That's why there's such an attraction, the sharing aspect. Even when riding by yourself you're never alone, because the bike draws people in. You've experienced it yourself, right? Ural Delay Factor we call it. Anywhere you go, whoever you have with you, people smile, wave, give thumbs up. They come up to you when you're stopped and ask questions. People beg for rides. It's a friendly, positive vehicle with none of the aggression or elitism of other manufacturers. It's funny, a Russian motorcycle is the least aggressive and the most inviting, which is opposite of what people would expect.

So there you have it, friends. A little insight into Ural and what makes it tick. I hope you enjoyed the read, and if you have any other questions about Ural go ahead and ask them in the comments. You might just get a response straight from the boss himself.