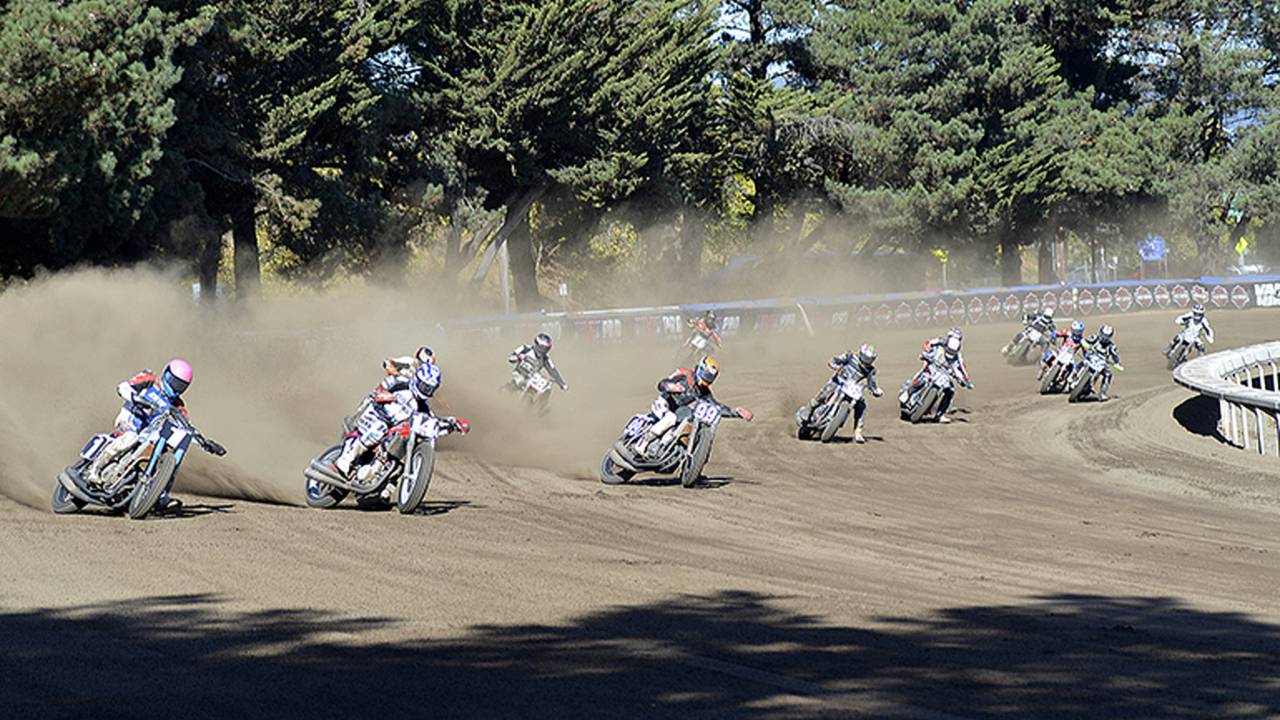 (Note: We Interviewed Michael Lock the Saturday before the season finale; therefore, there are no questions or comments iabout the tragic death of Charlotte Kainz and Kyle McGrange. Nor are there comments about the future of flat track racing in regards to the safety of the track).

Watching AMA Pro Flat Track is an exciting, yet intense event. As soon as the racers launch, you’re immersed in what’s happening before your eyes.

Fans eagerly watch the bikes thunder down the first straight as flagger Kevin Clark vigorously waves the green “go” flag. He does it with such enthusiasm, you can’t help but bolt from your seat as the racers pass within inches of him at 120 mph.

Without a doubt, Flat Track racing is one hell of a spectacle and it’s been that way since 1932. It's survived the Great Depression, a few global wars, and a forgettable series of Jane Fonda workout videos along the way. But despite all its staying power, Flat Track racing still hasn't become as "main stream" as you might expect.

One would think that an American-born professional motorsport that has been around for nine decades would be insanely popular... but that’s not the case.

Some may argue it’s a good thing – because a Flat Track race is much more intimate than a MotoGP or Supercross race, and the pits are filled with parents and their kids. This family-type setting and grassroots racing culture is what attracted Michael Lock, the current CEO of American Flat Track, to this wonderful sport.

Lock has been involved with both two- and four-wheeled machines for most of his life. His background includes holding positions of power at motorsports companies including Lamborghini, Triumph, and Ducati North America. Lock was appointed the position of CEO in November 2015, just before the season ended. His prior experience with motorsport exposed him to the high-cost and more glamorous racing championships like World Superbike and MotoGP, but when he was exposed to Flat Track, he was instantly enamored with it.

“One of the first things that struck me was: ‘Oh my god – this is racing like racing was supposed to be...’ Against the backdrop of very organized, polished, smooth racing at a professional level – what I would call TV sports – against that backdrop and that glamor, here was something that was done coast to coast in America," explained Lock. "It was invented here, it’s an American motorcycle sport – the only one. It’s ran on bikes that have been built in someone’s home garage, and the kids are all from places you’ve never heard of. And then they get on the track, 3 inches apart, on the dirt, with no front brakes. So it’s an amazing sport, and that’s what attracted me to it,”

Flat Track currently caters to those who not only have an enormous amount of talent on two wheels, but also to those who don’t need an exorbitant amount of money to become an AMA champion.

“We’ve got a sport that is young, diverse, low-cost-of-entry and high-excitement," Lock further explained, "That is a package that, if you’re not a complete idiot, you can build into something really good. So, that’s what gets me out of bed every morning.”

The Future of Flat Track Racing

In terms of the health of the sport today, Lock believes it’s quite positive. There have been a few things put in place that are reshaping the landscape of the series, starting with a name change from AMA Pro Flat Track to simply, American Flat Track. Sometimes it's the little things that make a difference and this is one that the AMA is hoping will give its most historic championship the unique identity it deserves. The other vital change is bringing in some long overdue brand diversity.

Harley-Davidson is no longer the Lone Wolf. Over the past three decades, AMA Flat Track has relied heavily on H-D as the main motorcycle manufacturer supporting the sport; Lock's first order of business was to figure out how to get more OEMs to participate.

“ 'Hold on a second—there’s a dozen motorcycle manufactures out there and this is a cool sport,'" Lock remembers, "We have to engage them.”

And he did. In his first year as CEO, the first order of business was to reach out to other manufacturers, encouraging them to offer contingency packages for racers looking to ride their bikes. This was an important step because it’s not only an incentive for riders to compete on different bikes, it also puts money back in the paddock and gets more brands on the track.

“We have invested tremendous time and energy into this to be able to put a pot of gold in the paddock to encourage the kids and the more senior riders to think, 'Which bike do I want to ride next year?' This is a way of professionalizing the sport as well as getting some new money into it,” Lock says.

As a result of the new OEM outreach, brands such as Kawasaki, Triumph, and Ducati have all had bikes in the field, and the series has secured no less than seven manufacturers who are willing to participate in rider contingency programs for next year.

The Next Civil War

It isn’t a secret that Indian Motorcycles plans to hit the ground racing in 2017, and this will definitely have a huge impact. Many of the most historic Flat Track racing storylines involve the battle for supremacy between Indian and Harley-Davidson. Now Indian is back with a team of former champions, a brand new bike and a burning desire to reestablish the brand as a competitive force in America's longest running motorcycle racing championship.

“Next year, we have a new American Civil War taking place in our sport," confirms Lock. "We have Harley-Davidson versus Indian for the first time since 1953. It’s immense and it goes beyond motorcycles. This is an American story.”

Watching these two original American-made motorcycle brands duking it out next year is a prime-time story. It will definitely intrigue more folks to tune in to the races to see who will come out on top, but Lock mentioned it won’t be the only thing that will bring in a bigger fan base:

“No doubt it’s going to drive interest," Lock admits with a grin. "We see as the core message for next year because I can take Harley vs. Indian anywhere and it will be a big story. But is it the only story? No, by no stretch of the imagination.”

Another important goal was to expand the series to different parts of the United States and visit tracks where Flat Track racing has never been before. And not only that, but the series is going to some new, state-of-the-art facilities which he believes will appeal to “the new fan.”

“We’re going to be racing at horse tracks that have beautiful facilities: air conditioning, lit parking lots, well-kept grounds," says Lock. "The new fan wants to be able to buy the ticket online, they want to be able to ride their bike or park their car in a parking lot right by the grandstands, they want to be able to buy a decent beer – something that they wouldn’t have to feed to their dog – sit in air conditioning, have closed-circuit TV, have an app that tells who’s winning the race, good quality audio, and be able to get out and go home. That’s what the modern fan wants. We need to deliver that, so we turned our event calendar upside down."

In the past, the series focused on, and became comfortable with, races hosted in the same venues across the Mid-Atlantic and Midwest with one or two in Florida and California. In 2016, the series experimented with the schedule by going to new locales like Turf Paradise, a beautiful mile-long horse track, in Phoenix.

It had been 30 years since AMA Flat Track racing visited that facility, so most pundits would have assumed that there wasn’t a large fanbase there. However, with the help of a local promoter and the horse track facility management team, the race sold out.

“We don’t sell out anything, anywhere; we sold out the first ever event. Two months later, we went to Remington Park, another beautiful facility in downtown Oklahoma City, and we sold that out, too,” says Lock. “So there’s a pattern here: If your product is good, if you position it and market it attractively, work with good partners and have a great facility, it works. So that’s going to be really what’s driving us in the future, and 2017 sees us going from 14 events to 18, so it’s a net gain of four.”

For 2017, the American Flat Track series will feature two classes: a Twins class where displacement will range from 650cc-999cc and a Singles class, which will be the domain of the 450cc bikes. The idea is that the younger, up-and-coming racers will compete in the SIngles and the professional grade racers will battle in the Twins. In an effort to give the riders a bit more exposure, the actual race structure is changing as well. Instead of just having two Heat races to see who will go on to the main, American Flat Track will deliver a tournament-style where there will be heat races, semi-finals and the Main event.

Are These Good Changes?

I would say yes, these are all changes for the better. At first, I was a bit apprehensive because growing the popularity of the sport may diminish that “Mom and Pop” feel of this championship. However, as Lock put it, the sport needs to be looked at like a business, so it can grow. His main goal is to modernize the event itself, not necessarily the actual racing component, and I can see it from this point of view now.

At the end of the day, American Flat Track is a professional sport; therefore, the racers who put their blood, sweat, tears, and lives on the line should be compensated for it. And the fans that part with their hard-earned money to travel to the races, buy tickets, and support the vendors, well they deserve a good show. From what I witnessed at the 2016 season finale, they're well on their way.