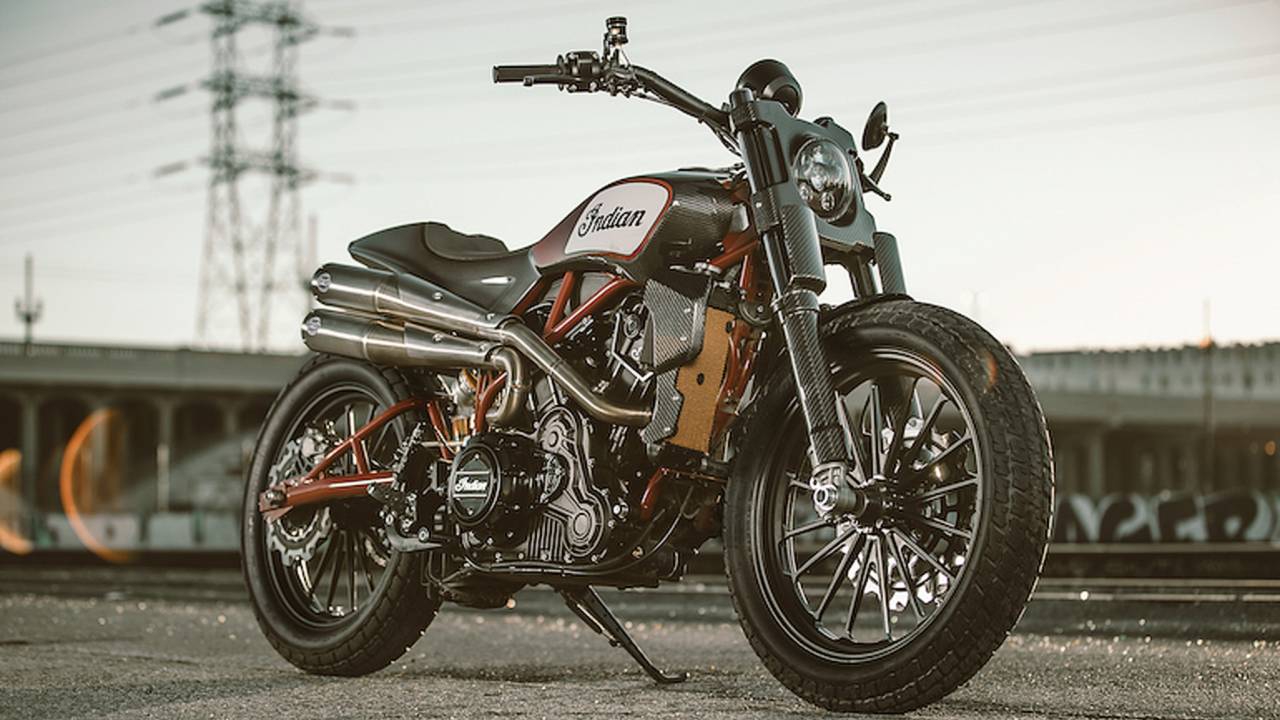 I feel the need to play things delicately here, but I think I can share this information without getting myself or anyone else in trouble…

You’ll probably be aware I’m a fan of the Indian Motorcycle brand. It makes bikes that look good and are fun to ride, and it’s headquartered in the great state of Minnesota (where I lived for a number of years). I’m not blindly faithful to Indian—I ride a Triumph, after all—but I’ll admit that when I hear a bit of scuttlebutt about what’s happening behind the scenes, I get pretty excited. Rewind, then, to a few weeks ago, when a buddy of mine who happens to be in the know got in touch to tease me with knowledge that Indian is working on something pretty exciting.

“Knowing you and your personal preferences, you’ll be very happy,” said my friend.

Friend (I’m being ultra cautious here, not giving Friend’s gender) was careful to not share anything more than that. Friend gave no sense of time frame, so this something could still be years away. Come to think of it, Friend never actually said this something is a bike. Hell, it may be that Friend was privy to some sort of clothing/accessories deal going down. Maybe Indian will team with Aerostich to create the Scoutcrafter one-piece riding suit (I am totally here for this -JM).

Indian makes bikes that look good and that are fun to ride.

Point is, everything in this article is wild, unfounded speculation. So, based on my personal preferences, let’s try to guess what awesome thing Indian is working on to make me happy:

(Warning: You are about to go down the Chris Cope rabbit hole of daydreaming about Indian Motorcycle stuff.)

I’m not talking about throwing leather saddle bags on a Scout and calling it a day. I mean a proper fast touring machine built around the Scout’s liquid-cooled 1200cc powerplant. Think BMW R 1200 RT, but more stylish. Not a sport tourer, because that genre’s hit a low, but certainly a bike that can hustle: fairing, 120-130 hp, equipped with riding modes, traction control, cornering ABS, quickshifter up and down, electronic suspension, cruise control, and the excellent Ride Command system that exists on Indian’s other touring models.

This new-school tourer would be called the Medina, a nod to Indian’s new home (Medina, Minnesota) in the way its old-school tourer, the Springfield, is so named in homage to the Massachusetts town in which Indian first started back in 1901.

I had written it as a joke but now that I think about it, I really like the idea of the Indian Scoutcrafter. It could be based on the Cousin Jeremy waxed cotton suit that already exists. Both Indian and Aerostich are Minnesota-based companies, so it’s a perfect fit.

When I interviewed Aerostich founder Andy Goldfine last summer he described the Cousin Jeremy as "for hipsters."

Because the Scoutcrafter requires more time and effort to make, it would be offered exclusively to Indian Motorcycle Riders Group (IMRG) members. The panniers of the aforementioned Medina would be designed to perfectly accommodate a rolled-up Scoutcrafter.

Indian’s parent company, Polaris, knows a thing or two about off-road vehicles. Transferring that knowledge to a vehicle powered by a boosted-capacity 1250cc version of the Scout’s liquid-cooled V-twin, the brand would also allow the bike to show a certain spiritual influence from Polaris’ erstwhile business partnership with KTM. Capable of putting 140 hp to its dirt-throwing rear wheel, the so-called Scout Franklin would have a low center of gravity and be not just a little bit batshit crazy.

The “Franklin” name would be an homage to Charles B Franklin, the engineer behind the original Scout—a bike that helped the company excel in new directions. Genuinely off-road ready, it would also be thoroughly enjoyable on the road and equipped with all the technowhizzbangery of the Medina. Heated grips would come standard.

This would be the ultimate Polaris swindle, the spirit of Victory Motorcycles and the Octane resurrected to haunt us once more: build up everyone’s expectations and underdeliver to the extreme.

Doing nothing more than adding another disc up front would be the ultimate act of trolling.

So, Indian would spend weeks and weeks bombarding us via social media channels with promises of something entirely new and badass. It would show us pictures of Indian riders winning the Isle of Man TT in 1911. It would dig up some cool dude with tattoos to offer a soundbite along the lines of: “This bike just totally kicks you in the teeth and you’re, like, 'Yeah, man, punish me more.'”

For some reason, Polaris has never quite managed to 100-percent nail the bobber look. The Victory Gunner was cool, but not really a bobber at all. The Scout Bobber is a far better attempt but still lacks some of the aesthetic purity of, say, the Triumph Bonneville Bobber or Harley-Davidson Street Bob. The Victory High Ball was probably Polaris’ best attempt, but it still wasn’t quite right.

Polaris has never quite managed to make a bobber that looks as good as the Harley-Davidson Street Bob.

Built on the Chief platform, the Chief Bobber would shed almost all of the rear fender and most of the front. There would be a solo saddle seat, pegs would replace floorboards, and the (mini-apehanger) handlebars would either be powder-coated black or dulled to avoid a too-chromed look. The bike would keep its dual front disc brakes because being able to stop is cool.

From 1928 to 1942 Indian offered various models built around a 1261cc inline four. It had a unique configuration that ran a four-into-one exhaust along the right side. It looked cool, but was reportedly really damn hot.

Modern inline fours are pretty boring as far as the Indian Motorcycle spirit is concerned, lacking the character the brand probably wants to deliver. So, this new Indian Four would, in fact, be a V4. Initially used to drive a Diavel-beating power cruiser, the platform would eventually replace the Thunder Stroke 111 in all of Indian’s big bikes, save the Chief and Chief Bobber.

That’s right, a machine that’s laser targeted at the Chris Cope demographic. A bike for me, and a UFC fighter whose nickname was “C Murder,” and a stand-up comic who talks about weed all the time.

The bike wouldn’t be exclusive to people named Chris Cope of course, it’s just that everyone else would have to pay full price on the Chieftain Chris Cope Limited Edition. The C3 LE, as it would be known, would be very much like a standard Chieftain Limited but with the Ride Command’s navigation system pre-programmed with the location of every Dairy Queen in the world. A 2mm pinstripe along the very edge of the fairing would exist so Indian purists could go ballistic at any moto-journalist who mistakenly refers to the C3 LE as “just” a Chieftain Limited.

It’s a Production Version of the Scout FTR1200 Custom

Yeah, that’s probably what it actually is, isn’t it? I mean, I love the Scout FTR1200 Custom and it’s in line with the sort of thing I’ve been wanting for years. A production version of that bike would make me very happy indeed, and it seems increasingly likely. Anyone notice how much Indian's been hyping that bike lately? And that the brand has stopped referring to it as the Scout FTR Custom and now simply calls it the FTR1200? That kinda suggests Indian plans to make more than just one.

I’m not a huge fan of the 19-inch front and rear wheels, simply because that limits your tire options, but I’m hopeful the production version will be a little different. I mean, it’s highly unlikely that the production, road-focused version will be shoed with the same Dunlop DT3 tires as the Custom. For me, a bike that could accommodate Pirelli Diablo Rosso Corsa II tires or the like would be pee-your-pants fantastico.

I’ve said before that what I’m hoping for is something that’s refined-raw and barebones—more BMW R nineT than Ducati Monster 1200 S—if not simply because I feel that would give Indian a better shot at success.

Over the years, Polaris has shown itself to be a company that does not like taking big gambles—I have no doubt the folks who control Indian’s purse strings are looking at the United States’ cruiser-dominant market and thinking that the upright FTR1200 is a very big gamble—so this bike will need to succeed pretty much from the get-go. As such, it shouldn’t contain aspects that are going to push Indian too far from what it already knows. Nobody wants the, “It’s a decent first effort, but…” review.

So, as much as I dream of bells and whistles on my imaginary Medina, I won’t be expecting any more whizzbangery than ABS here. I certainly wouldn’t complain, though, if the bike had some kind of rudimentary traction control system to help keep in check the 115 or so horsepower that I’d want from the engine. I mean, if Moto Guzzi can put traction control on its V7 III, surely it’s not too great an ask for Indian to do the same.