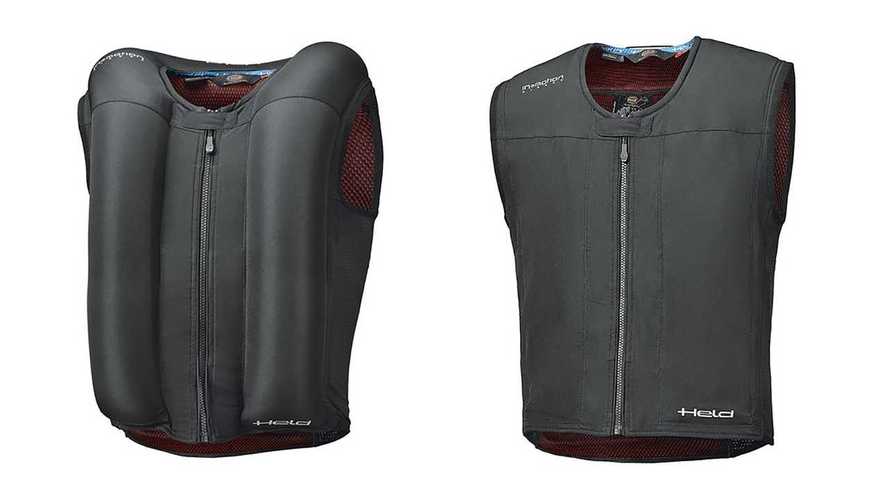 Protection at a fraction of the cost.

Manufacturers are coming up with new ways of making their safety technologies more accessible. For the longest time, if a rider wanted to buy an airbag jacket, they had to buy the entire (and often very expensive) jacket or suit.

Over the past year or so, however, some of the biggest brands in the motorcycle gear industry launched their version of the most versatile option: the universal airbag vest that fits under or on top of any jacket. Whether it’s Dainese or Alpinestars, riders have now access to the airbag technology at a far more available price without having to buy an entirely new jacket. German gear maker Held is the latest addition to that list with the introduction of its new airbag vest.

Until now, Held offered riders the possibility to add an airbag component to their Held-brand jacket thanks to the eVest Clip-in & In&Box. The only limitation with the eVest Clip-in is that it requires the customer to own or buy a Held jacket the airbag vest can, as the product’s name suggests, can be clipped to as demonstrated below.

The new airbag vest doesn’t need to be paired with another Held product to work—it works on its own and can be worn on top of or under any clothes.

Held relies on the expertise of French firm In&Motion and its proprietary airbag system. Other big names in the gear industry also use In&Motion’s technology, including Kilm and Ixon. Even motorcycle racers such as MotoGP Aleix Esparago rely on the French system to stay safe on the track.

The airbag itself is triggered electronically and inflated using a gas cartridge. The “bag” covers the rider's back, neck, and chest. The built-in sensors allow the system to record data 1,000 times per second to detect a fall as quickly as possible in which case it inflates the airbag in 60 milliseconds.

Note that according to the In&Motion system, the “lease” offers more perks, including unlimited warranty, unlimited updates, VIP service should the system stop working, and free upgrade to a new-generation In&Box. The purchase of the system also gives access to unlimited updates but limits the warranty to two years.