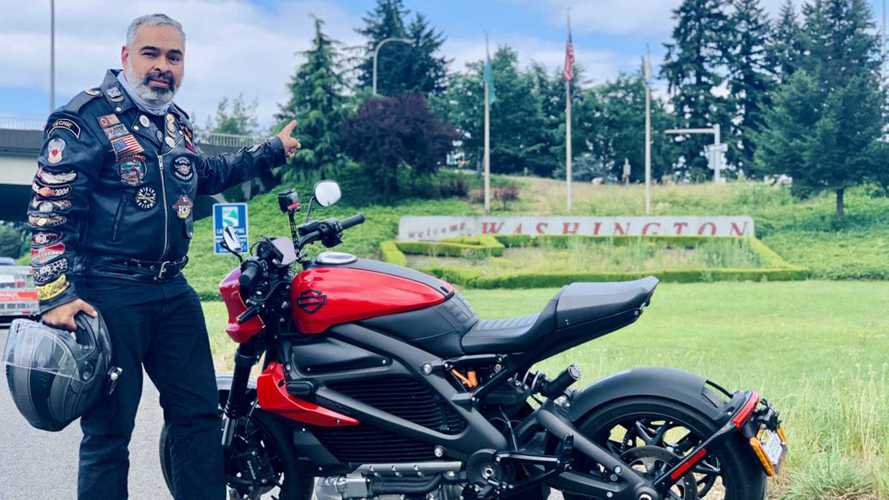 Touring the west coast on an electric motorcycle.

With their current design limitations, electric motorcycles are best-suited for shorter runs close to home base. That doesn’t mean you can’t do much, much more with them, as Diego Cardenas just proved. To celebrate his 50th birthday, he rode from Mexico to Canada—on a Harley-Davidson LiveWire.

Cardenas did his Mexico-Canada run up the West Coast of the U.S., through California, Oregon, and Washington. That’s almost a 1,400-mile trip, a very doable goal on most bikes, so why is that a big deal? It’s because electric motorcycles tend to have limited highway range, and long recharge times. Depending on a few factors, a LiveWire has a highway range around 95 miles, and takes about an hour to fully recharge its batteries on a DC fast charger (40 minutes to recharge to 80 percent). If you want to do long miles on a LiveWire, you’ll ride for an hour and a half, then recharge for an hour, roughly speaking—as long as you can find DC fast recharging stations when you need them.

RideApart Tours On An Electric Motorcycle:

Some other battery bikes have more range than the LiveWire, but they all face the same problem: you drain the battery quickly on the highway, and the battery takes a while to recharge. For that reason, most of the early adopters touring long distances on electric motorcycles had some sort of edge. EV enthusiast Terry Hershner is a good example of this. He extensively modified his Zero motorcycles to make it easier to ride coast-to-coast, adding multiple quickchargers and improved aeros to reduce energy loss.

More recently, when Charley Boorman and Ewan McGregor rode from Argentina to Los Angeles on LiveWires, they had the obvious advantage of a support crew as well as goodwill from the public that made things easier for their trip.

Cardenas wasn’t riding a highly modified LiveWire, and he isn’t a TV/film star with a big support crew. Instead, he carefully mapped out a south-north route through the west coast states using Charge Point and Electrify America charging stations, as they’ve got a deal with Harley-Davidson for free quick charging. He told Electrek he planned the whole trip with redundancy and backup plans in mind; he routed towards charging stations that had another charging station close by, so he wouldn’t be unable to continue if there was a problem at the first charging station. He also had his family follow in a chase car, in case he needed help. His original plan was to do the trip in five days.

Unfortunately for Cardenas, he ran into trouble along the way, including a lost key and other issues that slowed him down. He ended up taking about twice as long as he originally planned, but still looks like he enjoyed the ride, by the look of his Facebook videos filmed along the way.