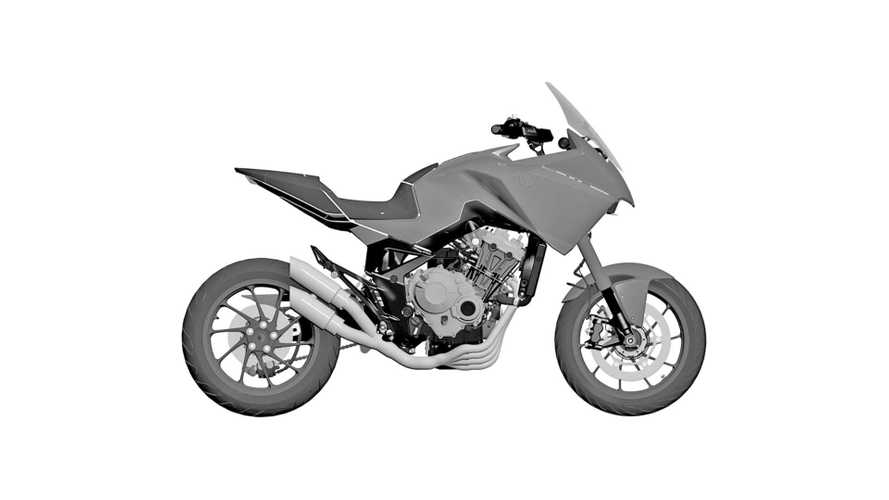 Is Big Red about to reveal a 650-class adventure machine?

After years of teasing the idea of a four-cylinder adventure bike, Honda seems to be taking the idea more seriously. The manufacturer recently filed a patent with the European Intellectual Property Office to protect a potential inline four-powered ADV.

Although the inline four engine does a lot of things very well, it hasn’t been a popular powerplant for adventure motorcycles. In the roughly 40 years of big-bore ADV machines, we’ve seen singles, all sorts of twins (V-twins, parallel twins, flat twins), and even triples, but only Kawasaki and BMW build a four-cylinder adventure machine. Those bikes—the Versys 1000 and S1000XR, respectively—are only adventure bikes by the wildest stretch of the imagination. Their primary intention is to pound out miles on pavement. They’re not off-road-friendly.

Looking at the design drawings for this Honda adventure bike, it seems similar to those machines. The bodywork is sporty, not rugged-looking, and the cast rims imply the machine is intended for asphalt, not hardcore off-road where spoked wheels are preferable.

There are two reasons the four-cylinder design is not popular for adventure bikes. First, inline fours are often larger than other engine configurations of similar displacement. Adventure bikes are typically designed to be narrow, and a wide engine works against that design principle.

Second, inline fours are initially designed for use in sporty street motorcycles, which usually build their horsepower and torque through high rpm. That high-revving design is less desirable on an adventure bike, where low-rpm torque is preferable off-road.

Still, Honda’s been teasing us with four-cylinder adventure bike prototypes for years on the show circuit. Why not? These days, Big Red is all about finding new ways to use existing technology. The Wave scooter gave its engine to the Grom, which has morphed into the Monkey, the Super Cub, and now the CT125 Hunter. The CBR250 turned into the CB300R, Rebel 300, CRF250L, and CRF250L Rally. Honda did more or less the same thing with its 500cc lineup. Now, it’s likely looking to expand its 650 lineup.

For about five years, Honda’s four-cylinder adventure bike prototypes at the Euro shows have usually been powered by the CBR650 engine. While that doesn’t rule out an all-new engine, it would make more sense than any other four-cylinder the manufacturer has in the lineup. It’s already available, it’s tuned to meet emissions standards, and it would provide an option that no other manufacturer offers at this point.