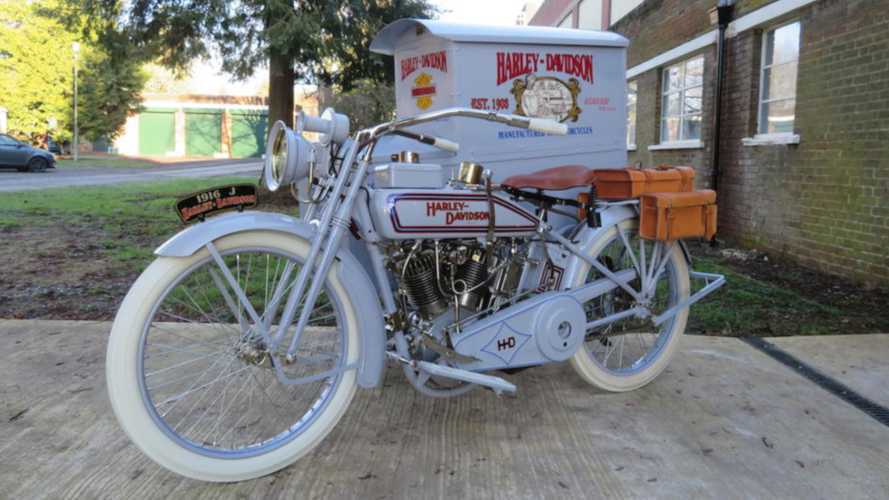 Remember when headlamps were hand-blown glass? This Package Truck does.

If you see the words “Harley-Davidson” and “truck” in the same sentence now, you’ll most likely picture a big, shiny pickup that bears zero resemblance to a motorcycle. Just over a century ago, that definitely wasn’t the case, as this 1916 Harley-Davidson Model J Package Truck clearly illustrates. What’s the “J” stand for? Just gorgeous.

The Package Truck was the Motor Company’s second commercial truck-type vehicle. Back in the 1910s, using motorcycles as commercial vehicles just made sense. It was a lot easier to take them down rural, rutted roads—a fact proved by the Milwaukee U.S. Postal Service mail carriers that tested Harley prototype motorcycle trucks over the harsh Wisconsin winter of 1912 to 1913, according to Riding Vintage.

Those posties used Motorcycle Trucks, which were a bit different from this Package Truck. The MT units featured cargo boxes that rode on two wheels out in front of the rider, visually similar to how some pedal-type ice cream trucks look in our modern era. At the time, Harley took what it learned from those MTs when it discontinued them in 1914, and adapted its sidecar rig to haul commercial items—and voilà, the Package Truck was born.

The result was perfect for companies to paint with their names, slogans, services—basically, it was a great rolling billboard as riders took their deliveries around town. Harley offered custom sign lettering, or companies could opt to do the work themselves. What’s more, the sidecar cargo unit was easily removable so you could just use the bike on its own at your leisure. The concept proved so successful, Harley kept making Package Trucks until 1957.

For its 100th birthday, this particular 1916 example had a complete and very detailed restoration over the course of 2015 and 2016. Amazingly, it’s one of only two known Package Trucks to retain its original electrical system, per Bonhams. It has a “very rare Remy magdyno” and its original hand-blown headlamp bulb intact, as well—and the headlamp actually still works.

Poring over vintage photos of old Package Trucks, there were some amazing creations that businesses used back in the day—but seeing this exquisite paint job and restoration in full color is an absolute treat. Bonhams estimates it will go for around £25,000 to £35,000, or US $32,000 to $45,000 when it crosses the auction block at the Spring Stafford Sale from April 25 through 26, 2020.