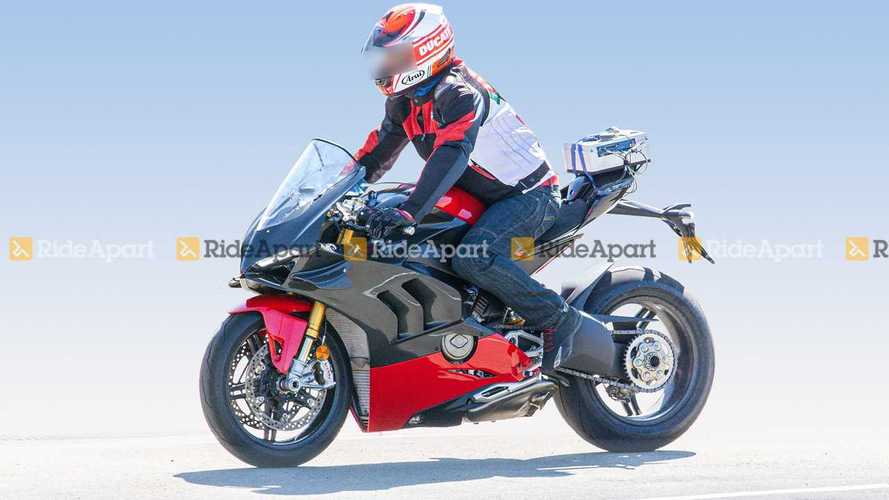 A new Panigale is on its way.

For 2018, Ducati gave its V-twin-powered supersport, the Panigale 1299, a proper sendoff by replacing it and continuing the Pani legacy with a shiny new V4 engine and model. The new Panigale V4 upped the ante on a number of fronts, including power, and introduced a new four-cylinder platform that allowed Ducati to get creative and introduce a flock of V4-based models. As with the previous generation of the Pani, only one version of the high-performance model was not enough. Six iterations of the model are currently listed on the Ducati Website and there could be a seventh about to be added to the list.

A Lot To Look Forward To:

Photographers have spotted a Ducati test mule being tested, sporting a few subtle but familiar features, leading us to believe that the Superleggera is making a comeback. Ducastistas have been wondering whether and when a V4 Superleggera would be introduced and it looks like the answer to that is “soon”.

At first glance, the mule looks almost identical to the Panigale V4 R introduced earlier this year, sporting the same aerodynamic winglets and gills. Upon closer inspection, however, we notice a few minute difference, starting with the carbon fiber fairing.

In some of the pictures, we notice that the nose of the bike has that typical carbon fiber sheen—a sensible choice of material considering the whole point of the Superleggera is to be significantly lighter than the entry-level Panigale. For comparison, the previous generation Panigale 1299 S weighed in at 419 lb while its Superleggera counterpart tipped the scale at a minuscule 368 lb.

Another clue that indicates that the model being tested is seemingly a Superleggera is the wheels. The rims—supposedly also made of carbon fiber—are the exact same design as the ones used on the 1299. Finally, the exhaust tips are made of titanium (if the “Titanium” engraved on the right-hand side muffler is any indication). With the addition of the Superleggera nameplate, we could potentially expect a slight increase in output—it was at least the case with the 1299 generation.

While the new model is still being tested, it looks just about ready for production, which could mean that there’s a chance the company will unveil the bike along with the rest of its lineup at the end of October.