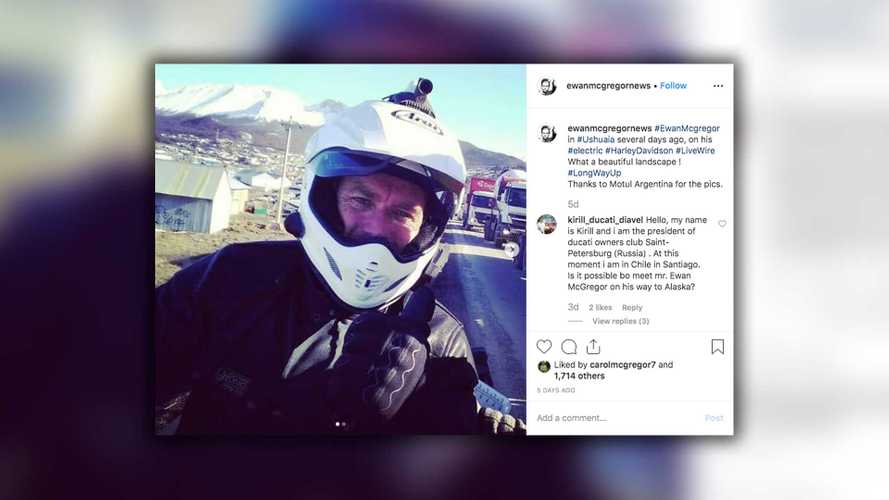 These Harleys look ready for adventure!

Pictures of Ewan McGregor on his blue Harley-Davidson LiveWire and the Long Way Up crew have surfaced on Instagram, showing the actor on his fully-loaded electric bike. We also get to have a better look at the bikes and their equipment, which includes soft saddle bags, wire spoke wheels, headlight grille, hand warmers, and a tall windscreen—among other things. They're pretty gnarly-looking!

The crew was apparently traveling through Ushuaia, in the Tiera del Fuego archipelago in Argentina. Later pictures show the team at a hotel in El Calafate, 540 miles north of Ushuaia. While it's hard to determine the timeline of the pictures, it seems like the crew has managed to travel that distance quite rapidly.

We felt a tremor in the ground from thousands of fans cheering as one when Charley Boorman confirmed that he and pal Ewan McGregor were going to tackle the long way up. The rumor that the famous riding duo was back in action surfaced in January, confirmed a few months later by Boorman himself during an interview. Filming has seemingly started (or is about to) and we now know what surprise Boorman was referring to in the interview: the guys are apparently going full electric.

One Long Way Up Incoming:

In fact, the people at Autoblog Argentina have spotted a fleet of four adventure-ready Harley-Davidson LiveWire equipped with hand guards and soft luggage. The vehicles in crates were unloaded in Tierra del Fuego, the southernmost tip of Argentina. In addition to the orange and blue LiveWires, a pair of all-electric Rivian R1T pickup trucks were also spotted in the same area.

Now, we all know how long-distance trips on electric motorcycles can go (coughZerocough). That being said, Boorman and McGregor have the advantage of an entire crew there to help—including by following them along their journey with charging equipment. This is what certain sources suggest the Rivians will be used for—possibly even using their gigantic batteries to charge the Harleys.

The LiveWire has an estimated combined range of 95 miles and 146 in the city. However, there’s no saying what the range in off-roading context is—the speeds are lower, but the bike works harder. The Rivians have an expected range of 400 miles, which makes them easier to manage on long-distances and respectable support vehicles for an all-electric (almost) endeavor.

On the bright side, the LiveWire is DC fast-charger compatible, meaning it can get 80-percent of its charge in roughly 40 minutes. While this means the crew will have to make regular pitstops to charge the bikes, they will only need to stop for an hour or so. Plus, having the charging stations tag along eliminates the need to find them in the middle of nowhere.

While there’s been no official report of the adventure actually being an electric one, Boorman’s mention of a non-traditional long way combined with the fleet of electric vehicles spotted in Argentina is enough to get the rumors going.  Looks like the boys are back at it and this time, they’ll be traveling from South America to the United States. We’re happy to see them back in action and curious to know how the electric adventure will go.