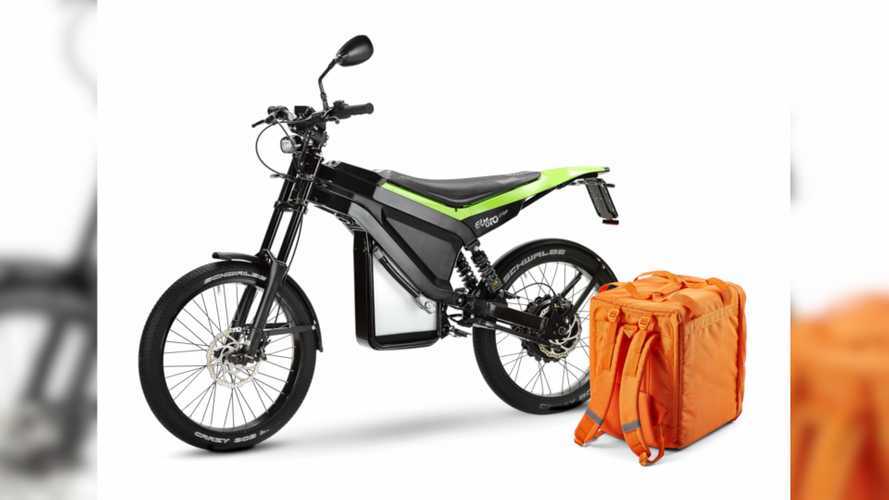 A cross between an e-bike and a scooter is here.

If you live in a densely populated urban area, people doing deliveries are everywhere—many of them on two wheels. From courier services to Uber Eats deliveries, riders are zooming around quickly to get you your stuff. Electric two-wheelers seem like a natural fit in the delivery industry—and German e-bike manufacturer Govecs just released a new bike designed with an eye toward speedy delivery.

Meet the Elmoto Loop,  an e-bicycle/scooter hybrid model that Govecs boasts is currently the lightest vehicle in the L1e European moped class. That means you don’t need anything but a regular car license to ride it. With a weight of just 59kg (or 130 pounds), it’s very lightweight indeed. The Loop’s featherweight build doesn’t mean that its carrying capacity is limited, however. Instead, Govecs claims that it’s capable of carrying up to 141kg (or 310 pounds).

The Elmoto Loop features a 2-kWh motor, with a top speed of 45kmh (which is just under 28mph). According to Govecs, it can achieve a full charge in four hours. Importantly, the battery is removable so you don’t have to lug your entire e-bike up and down stairs just to charge it.

“When combined with a backpack, the scooter is also ready to make deliveries,” said Govecs in the bike’s official launch announcement.

Range is listed as 80km (or just under 50 miles). If your business is simply making local deliveries, this could work well—but even a series of quick trips can stack up the miles fairly quickly. Since these bikes have removable batteries, serious delivery fleets will need to have backup batteries pre-charged that riders can switch out when needed.

In one official photo, there’s a bright orange cube-shaped backpack proudly on display. It’s unclear from the available information whether this is an optional accessory that can be purchased directly from Govecs along with the Elmoto Loop, or whether you have to bring your own backpack for deliveries.

As someone who used to do deliveries on my scooter, I can say that I would appreciate the agility a bike like this would offer in tight spaces. Clearly, it would work better for certain kinds of delivery riders than others. Delivering a tray of individual coffee drinks to an office, for example, wouldn’t fare well in that backpack. However, you could easily stick a growler of coffee or tea in there, alongside some bagels, to perk up an entire office in one go.

The Elmoto Loop will be available in Europe in September 2019, and also comes with such important delivery rider amenities as a USB socket, a steering lock, and a smartphone app. No pricing information is currently listed on the official website. Govecs’ other bikes are currently sold in Spain, the Netherlands, Italy, Croatia, and also via Electric Avenue Scooters in Austin, Texas, USA.