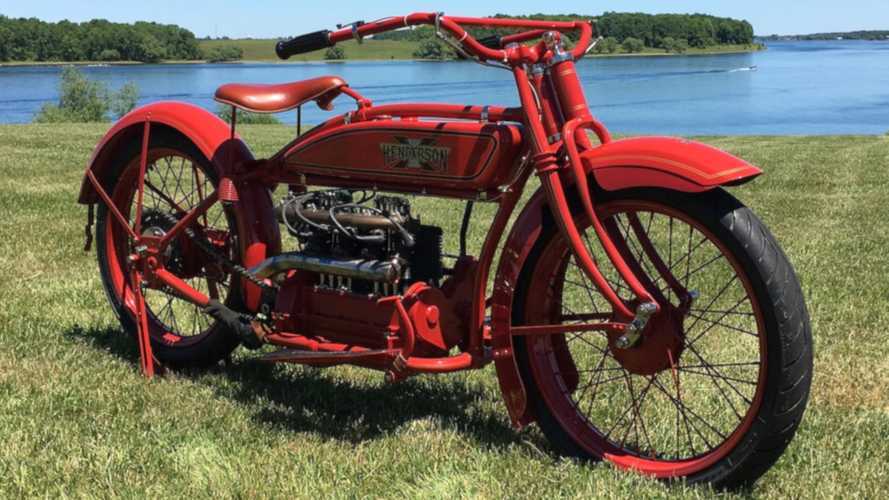 Captain Mark Hunnibell mapped his full route on his website, so you can ride along if you want.

In 1919, a British RAF captain named C.K. Shepherd crossed America astride his trusty Henderson motorcycle. He chronicled his journey and, soon after, published a book about it called “Across America By Motor-Cycle” in 1922. Now, a hundred years later, a captain named Mark L. Hunnibell is seeking to recreate Shepherd’s ride on board his own fully restored 1919 Henderson.

We Can Rebuild You; We Have The Technology:

While many Hendersons (and other makes) of that time (just post-WWI) were painted in khaki green, Hunnibell had asked antique motorcycle paint expert John Pierce for help with repainting the frame and other bits. Upon close inspection, Pierce discovered that the original bike had been painted red. At the same time, Hunnibell was also becoming deeply immersed in the world of the Antique Motorcycle Club of America, and all the many knowledgeable enthusiasts and experts it contains.

Henderson Motorcycles started with brothers Tom and William Henderson in Detroit in 1911, but they sold the company to Ignaz Schwinn in 1917 and production then moved to Chicago. These Chicago-built bikes featured a 1,147cc engine that produced just 14.2 horsepower—and stopped with help from a rear band brake, according to Driving. Transmission? Three speeds, if you please.

This particular 1919 Henderson came from Hunnibell’s dad, and he’s been working on it on and off since 1979. He finally got it road-worthy at the end of 2018, so it’s been an incredibly long road. Hunnibell went to school for industrial design, but became an Air Force pilot and later a commercial pilot. Due to life circumstances, he didn’t start the true rebuilding process until 2000.

There’s quite a story involved with Hunnibell’s first unsuccessful attempt at restoring the original engine, but it’s best if you just read it in his words. Like a lot of the best people you meet in this shared hobby of ours, he’s a great storyteller. Eventually, he secured the assistance of Henderson specialist Mark Hill in upstate New York.

Now, it’s nearly impossible to recreate the exact route that Shepherd originally rode. In 100 years, roads have changed (like existing where they didn't before, changing direction, and so on), bridges might not be there anymore, and other geographical features may have shifted as well. Through extensive research, Hunnibell has done his best to recreate the original route using back roads as often as possible, and only relying on interstates where absolutely necessary.

Since it’s 2019 and not 1919, you can follow along with Hunnibell’s route on his website — he even has a GPS tracker set up so you can see, in real time, where he is. As I’m writing this, he’s riding across Kansas. He also has meet-ups set up along the way, and has had the AMA sanction it as a Grand Tour participant event in case local motorcyclists want to join him for part of the ride.

As well, Hunnibell annotated and updated Shepherd’s book with additional maps, photos, and notes, and released it in ebook, audiobook, and print book forms in June 2019. He also plans to chronicle his own journey in 2019 with a new book about crossing America by motorcycle once he completes the trip.

Driving reported that Hunnibell managed to track down and befriend Shepherd’s son in 2017, and that Charles Shepherd gifted him with his father’s compass ahead of Hunnibell’s upcoming trip. If you can’t make it out to meet Hunnibell while he’s on this trip, check out his video from 2019 Daytona Bike Week to see the bike in action.

Sources: Across America by Motorcycle, Driving