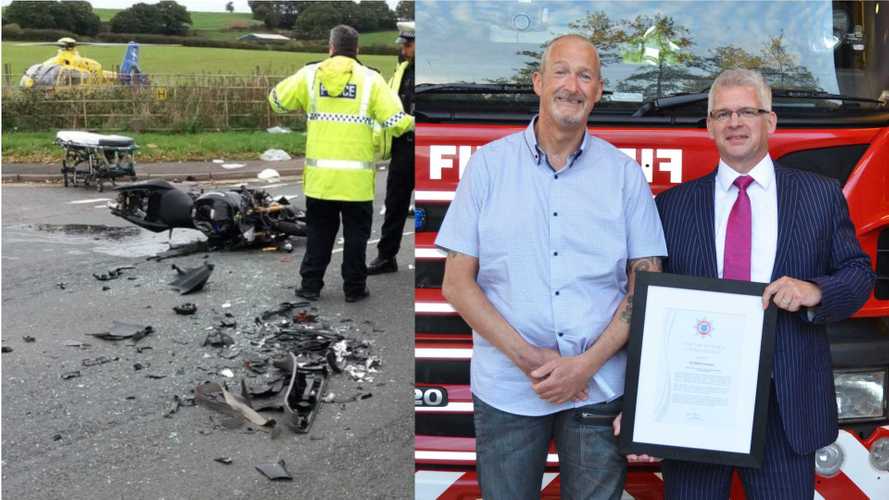 This wasn't rocket surgery, it was far more important.

Probably one of the worst days of your life as a motorcyclist is the day you have a bad crash. That’s what happened to motorcyclist John O’Brien while he was out riding one day. Then, to make terrible matters even worse, he went into cardiac arrest and his heart completely stopped before he could be loaded into the waiting medical evacuation helicopter.

When Is It Safe To Move A Crashed Rider?

Luckily, Dr. Mark Forrest was on the scene. O’Brien, who is 47, had just entered a scenario that the Cheshire Fire and Rescue Service called “commonly described as unsurvivable in medical circles.” Dr. Forrest and his team of firefighters and paramedics did every reasonable thing they could to get his heart restarted—but none of it worked.

It was time to throw all notions of “reasonable” to the wind. If someone didn’t try something absolutely bonkers, O’Brien probably wouldn’t survive. Dr. Forrest instantly developed a plan you might not expect if you hadn’t read this headline. Real talk: Who would expect this?

“Despite the huge effort by the doctors, paramedics, firefighters and police officers, nothing was working and it wasn’t looking good for him,” Dr. Forrest later recalled.

“I joined them at John’s side and, after a very quick discussion, we knew that the only chance of saving this man was to open up his chest to manage his internal injuries and to massage his heart until it started beating. This is rarely successful, but we did want to at least try.”

O'Brien and the medical and fire team who rescued him

With the assembled medical team’s assistance, it was then that Dr. Forrest broke out his surgical toolkit and performed roadside heart surgery on the fallen motorcyclist. Your eyes don’t deceive you; according to Cheshire Fire and Rescue, “John’s chest was completely cut open, exposing his heart and lungs, to allow treatment of his internal bleeding, lung injuries and to massage his heart back to life.”

To everyone’s great surprise, what may have seemed like the grimmest of ‘hail Mary’ gestures worked. O’Brien’s heart restarted, the assembled medical team got his bleeding under control, and he was able to be airlifted to the Major Trauma Centre at Aintree in Liverpool for proper hospital treatment—which included additional surgery performed inside an operating theater.

John O'Brien hugs the doctor who saved his life

For his part, O’Brien has now fully recovered and was even able to walk his daughter down the aisle at her May 2019 wedding. Dr. Forrest received a Fire Chief’s Commendation award from Chief Fire Officer Mark Cashin for his quick-thinking part in saving O’Brien’s life during this incident.

All photos courtesy of the Cheshire Fire and Rescue Service.