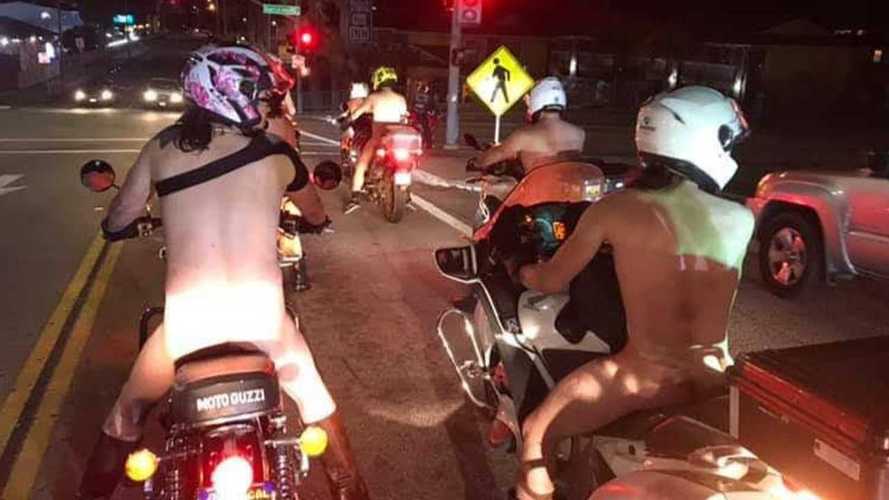 Instead of the Polar Bear Plunge, the Naked Ride gains popularity.

Every January for the past dozen or so, the Vampires Motorcycle Club out of Santa Cruz, California hosts the “Naked Ride.” It is exactly what you think it is. Several dozen riders hop on their bikes in the nude.

The riders gather in the Vampires MC headquarters, the ReCycle Garage in Santa Cruz, doff some of their gear and most of their clothing, hop on their bikes and tour the city. Fear not, though; the clothing is bagged up and loaded into a chase vehicle so that the riders have something to put back on at the end where there is hot cider and a fire to warm back up. It is the motorcycle equivalent of the Polar Bear Plunge, only instead of swimming in freezing water folks ride naked through chilly California winter air.

Zee Traveler, a self-described Minimalist Motorcycle Vagabond, who runs the FaceBook page of the same name, participated in it for the first time this year, at the recommendation of some friends in the MC, and described it as “liberating” and “exhilarating.” The initial gathering wasn’t awkward at all, to her surprise; nobody stood around naked and chatting. Everyone just took their clothes off and got on their motorcycles.

The event details on the Vampires MC page remind people that there is a private, secure staging area where everyone preps. This year there were approximately 21 bikes, only one carrying two people. Two of the bikes served as route blockers; that is, they held up traffic so that the whole group of bikes could stay together. Of the riders 5 were women, and one woman rode pillion (behind a woman rider). The MC event also admonishes the attendees to be decent and respectful, and that folks who wanted to show up at the staging area without participating would not be welcome. “No Leg Humpers,” reads one of the rules.

The group was well-received by surrounding traffic in Santa Cruz, a legendarily nudist-friendly city. Zee says that the group heard many whistles and cars honking. Passers-by took pictures and video of the group of naked riders. It is not illegal to be naked in Santa Cruz, by the way. It is illegal, though, to ride a motorcycle without a helmet. So that is what they do! Safety first, though; boots and gloves are acceptable too.