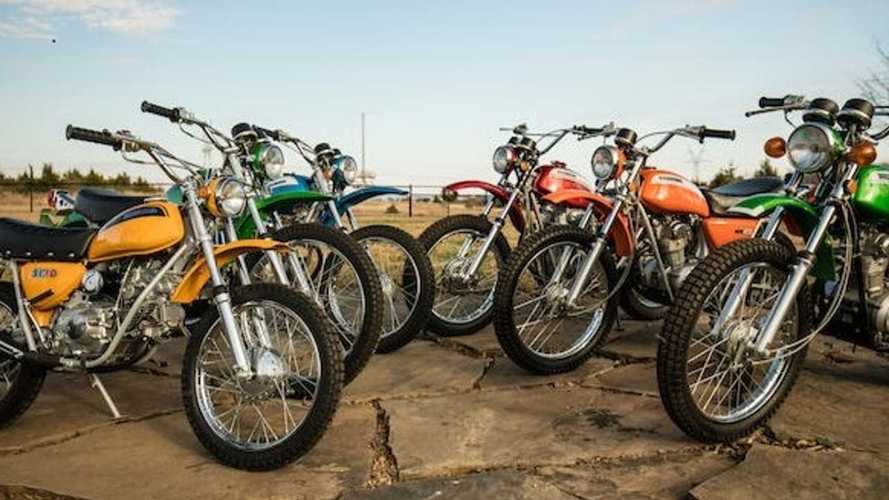 Bonhams Auction House offers a complete lineup of every model of 1971 Honda SL motorcycles for sale.

Marbles Motors out of north Texas has lovingly restored each of these machines to as close as its original glory as possible.

As a young boy, the founder of Marble Motors, Randy Marble, fell in love with an SL70. Inspired later in life, he purchased another SL70 when he was older. This purchase needed a restoration, and that led to another. Marble says "It was never intended to be a career. It was a love of motorcycles as a child—I always wanted to be out and free, to roam and ride. One thing led to another and now it's a full-fledged business restoring old bikes." The SL70 was the bike which started the shop.

Locating and restoring one of each of the entire SL line for this collection became a project of passion for Marble. He used as many NOS parts as possible. He rebuilt and tested each of the engines before they went on display – except for the rarest bike in the lot, the Candy Sapphire Blue SL175—with only 1100 original miles, it just needed its paint job restored.

The SL90 is a rare addition, since it was a Japanese domestic model that was never sold in the U.S. The Candy Emerald Green 90 has a black-painted frame, acutely upswept muffler, a centerstand, and tachometer.

Ahead of its time, the SL70 was a fully featured small motorcycle with a hand clutch and a foot-shift giving it a "big bike" feel. The SL was a unique line of bikes at the time, as they were outfitted with four-stroke engines among a sea of 2-stroke competitors. The editors at Cycle World called the 70 "An ideal beginner's mount,” but added “its appeal is much broader than that...if this multi-age appeal is any indication, Honda has another marketing success on their hands. … It's getting to the point where we will have to admit that Honda has built a real dirtbike." Cycle World Magazine specifically praised the 350cc machine: "Honda's new SL350 is not yet a motocross machine, but it is not intended for that purpose. Rather it is a beautifully conceived, tractable, reliable playbike with newfound rough-terrain capability. It's amiable and has great potential."