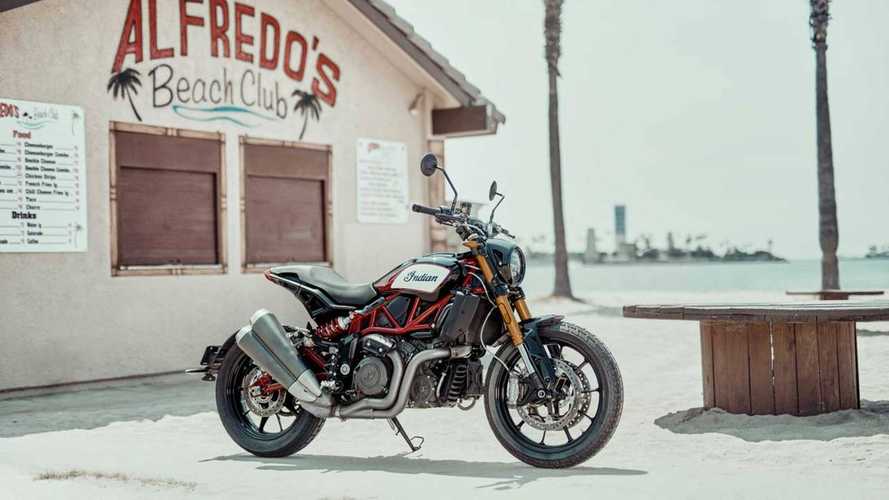 The classic brand takes a modern turn with this highly anticipated new model.

Ever since showing us the FTR 1200 Custom last year, the internet has been abuzz with rumors and anticipation about this completely new and different kind of Indian. Rather than a classic American cruiser, this is a thoroughly modern naked sportbike. This is a radically new and welcome direction for the company. Here's everything we know about this revolutionary Indian.

SHUT UP AND TAKE OUR MONEY

From Indian's flat track racing success, Travis Pastrana breaking Evel Knievel's jump records on a specially built Scout FTR 750, and the FTR 1200 Custom, the company had been building up excitement and anticipation for a totally new bike they finally revealed back in October; the production, road-ready FTR 1200. This is a wild departure from Indian's usual cruisers and exactly what the brand needs to stay relevant in today's market and appeal to a wider variety of riders.

While the concept bike was designed solely for styling purposes and to gauge customers' interest, the production bike is made for the real world; a "flat tracker for the street", as Indian calls it. The FTR 1200's trellis frame design that incorporates the engine itself into the structure is bound to remind us of the signature Ducati Monster 1200 frame, however the Indian sells for significantly less—in fact pricing for the entry-level 1200 starts at $13,499.

The FTR 1200 incorporates styling cues from the FTR 750 flat tracker, such as the rear swingarm design and the lines of the gas tank. (The actual tank on the competition model is located under the seat for better handling and weight distribution.) Even the custom-made Dunlop tires have tread resembling dirt track tires but are designed specifically for road use. A round LED headlight enhances the retro, yet modern styling. The FTR 1200 gets an analog speedometer with a USB port.

While the concept bike based off the Scout used the same engine, the production engine has undergone so many changes it might as well be considered an all-new mill. Unlike the Scout, the block serves as a structural component in the FTR 1200, with the frame and swingarm firmly attached to it. The intake manifold is now part of the cylinder heads, and a dual-bore throttle body replaces the old single-bore. Indian did a great deal of weight reduction as well thanks among other things to the one-piece magnesium valve covers. Displacement is up from 1,133cc to 1,203cc and new pistons provide a higher compression ratio. The end result is an increased output now rated at 120 horsepower. It even does sweet burnouts.

The model will land in the showrooms in May 2019. It's coming and we're here for it!