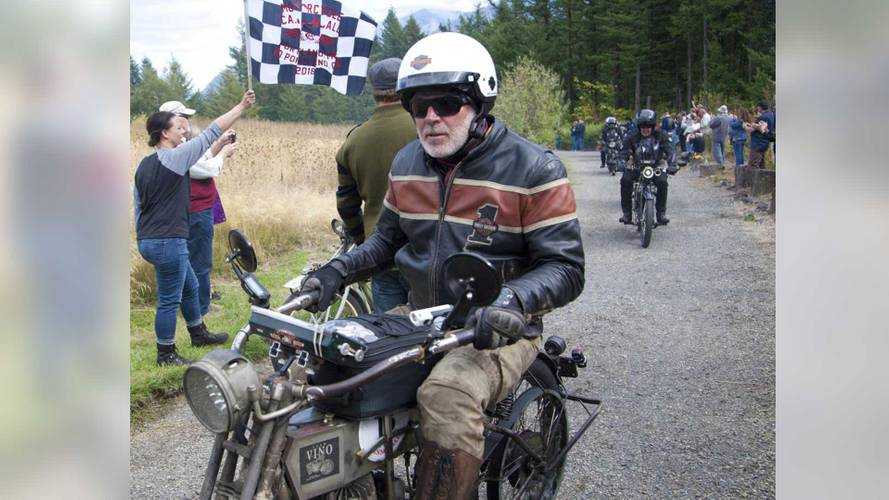 My butt hurts just thinking about that ride

After nearly 3,500 grueling miles of two-lane blacktop—from Portland, Maine, to Portland, Oregon—the 2019 Motorcycle Cannonball Endurance Run is over. Out of the dozens of pre-1929 iron—Indians, Harleys, Nortons, even a Ner-a-Car!—that took part in this year's run, one bike stood tall above the rest. That bike was a 1914 Harley-Davidson single run by Dean Bordigioni and Team Vino.

Bordigioni, who owns and operates a winery in California, ran the entire run through all sorts of weather, up and down mountains and across prairies, on a single-cylinder, ten-horsepower bike with a single-speed transmission and a 44 mile-per-hour top speed with a stiff tailwind. I can't even imagine, and neither can my lower back. He was backed up by the rest of Team Vino—brother Tom, Bruce Cooper, Crew Chief Kurt Campbell, and mechanics Robert "Big Swede" Gustavvson and Chrystiano Miranda—who followed along in a big Ram pickup hauling a bike trailer full of tools.

Every night Team Vino would wrench on the old Harley and drink wine to prepare for the next day's riding. Their persistence paid off, too, as Bordgiondi and the Little Harley that Could rolled across the finish line just outside of Portland.

“We’re kind of a band of brothers,” Campbell told the Capital Journal. “If something fails, you fix it, on the spot or bring it back and work on it until it’s ready, whatever the cost, it’s ready by 8 o’clock the next morning. It was 17 states in 17 days, and we got 100 percent of the miles."

There's no cash prize for the Cannonball, you do it for the fun and the challenge, to show off your bike and to say that you did it. Bordigioni did get a nice bronze statue out of it at the after-race banquet, but the real prize is the bragging rights.

So, what's next for Team Vino's stout little Harley?

Campbell told the Journal that the bike will be put on display at Bordigioni's winery. "Retired and put out to stud," he joked. Sounds like the little bike earned it.